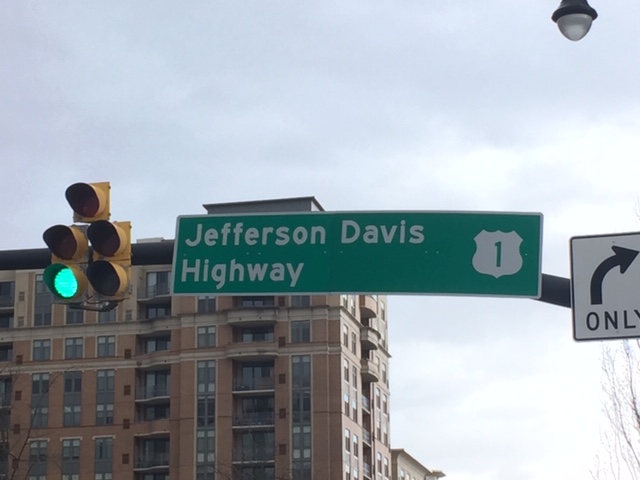 Please join me tomorrow morning to urge Virginia
to finally get rid of Jefferson Davis Highway in Arlington
and to do so as soon as possible.

The Commonwealth Transportation Board will be meeting tomorrow at 8:30 am at the Hyatt Regency/Crystal City...
... on 2799 Jefferson Davis Boulevard.

How's that for irony?

Please be there by 9 am and sign up to speak at the public meeting to encourage them to finally retire this name and stop honoring a man who deserves no honor in Arlington.

As the attached article noted:

But Del. Mark Levine, who in recent years has been something of a one-man band pounding the renaming drumbeat, is pressing residents not to take anything for granted. He wants them to turn out and show their support for the switch.

“This is not a slam dunk,” Levine (D-45th) said in a campaign e-mail. “I will be at the hearing, and I encourage you to be, too. Let’s show them that Arlingtonians really want this change.”

Here is what I sent the Commonwealth Transportation Board urging them to make the name change:
You can send them a similar statement of support.

Dear Secretary Valentine and other members of the Commonwealth Transportation Board,

As I’m sure you’re aware, Jefferson Davis, the President of the Confederacy, was from Mississippi and had no significant ties to Northern Virginia. More importantly, he was a traitor to the United States. As you know, the Confederacy, which he led in order to preserve and extend the institution of slavery, plunged the United States into our most bloody war in American history, where more Americans died than all our other wars combined. Jefferson Davis was indicted for treason but never tried.

At the time the highway was named in Davis’ honor in 1922, white supremacy, lynching, Jim Crow, and the KKK reigned supreme in Virginia. Even though the Civil War had ended more than a half century earlier, the highway was not named for Davis until 1922, serving to promote these abhorrent values and helping to terrorize the black population into accepting and submitting to their second-class status at the time.

I hope you agree with me that these values of a century ago are no longer Virginia values and certainly not the values of the People of Arlington and all their elected representatives who emphatically support changing the name. For quite some time, locals have preferred not to use the odious and offensive name.

Furthermore, the highway has been known as Richmond Highway in Fairfax County for more than a century, and the City of Alexandria just this year made the name change as well. Google maps already shows Route One as "Richmond Highway", and at the Arlington public hearing last week, there were reports of several people (especially  tourists) getting lost because of the name confusion. There were also reports at the public hearing that national conventions are refusing to stay at the National Airport hotels on the Highway because of their antipathy to the street name of the hotel address. It’s clear — because national conventions can easily stay in DC or Maryland instead — the street name is bad for Virginia business. At my personal request, the Arlington Board amended its original resolution to make clear that if the CTB acts quickly, Arlington could change the name even sooner than October so as to alleviate the on-going confusion and loss of business.

As I’m sure you’re aware, there is no legal barrier to the name change. In March, the Virginia Attorney General issued a formal advisory opinion at my request clarifying that the Commonwealth Transportation Board has full authority to change the name of Jefferson Davis Highway if Arlington adopted a resolution making the request. Here’s the opinion: https://www.oag.state.va.us/files/opinions/2019/19-010-Levine-issued.pdf

I understand that the CTB regularly allows localities to choose their own highway names. I’m glad to know you support local control. This is all the more reason not to deviate from the routine in this case. It would be seen as a clear signal nationwide (and, sadly, worldwide) that almost a century after the highway was named, the Commonwealth of Virginia still celebrates its racist 1922 values.

Please act as soon as possible. The nation is looking to Virginia, and getting this wrong but would be a terrible black eye not just for Arlington but for the entire Commonwealth.

With your help, we can finally put to rest a century of Arlington honoring a man who so dishonors our values today. Please join us tomorrow morning.

P.S. Unable to attend tomorrow morning? You can still contribute to the cause by helping us elect Virginians that recognize that white supremacy is no longer a Virginia value to be celebrated.