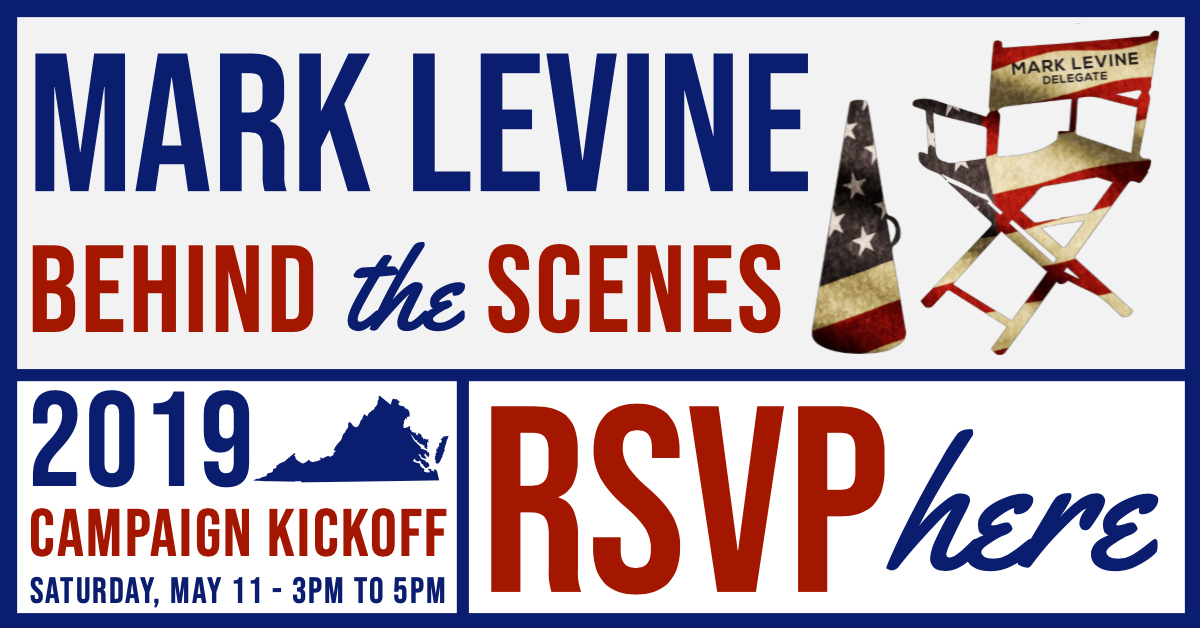 I hope you can join us at our campaign kickoff tomorrow!

Our campaign is about Mission 51, giving us a 51-seat majority in the Virginia House of Delegates.
(We're just two seats short.)

Our campaign is about the entire Commonwealth of Virginia.

It's about our students who think school is a place for learning, not active shooter drills and armed teachers.

It's about survivors of domestic and sexual violence who want a society that gives them the resources they need and a justice system that treats them fairly.

It's about workers who want to unionize and get paid fair wages with good benefits.

It's about people having the right and ability to make their own healthcare decisions, and not go bankrupt because of what they decide.

It's about voting rights and civil rights, equality under the law and making sure law enforcement treats everyone with equal dignity and respect.

It's about a woman's right to control her own body.

It's about transportation infrastructure.

It's about clean air, clean water, and a real plan to fight climate change.

It's about showing the entire nation that democracy can work, even in the face of gerrymandering and a system rigged against us.

It's even about holding our President to account, which I've tried to do in Virginia and could successfully do, if only we elect two more Democratic Delegates.

This year, we can bring Virginia our first progressive majority in the 400-year history of the oldest elected government in the Western Hemisphere.

But we can only do this if YOU join our effort to win a Democratic majority this November, creating the momentum in 2019 for a full national victory in 2020.

Our country's biggest victories for economic, racial, and social justice have always come from the efforts of the grassroots. That's why ours has always been a grassroots-powered campaign.

I don't hold $5,000 a plate fundraisers. I have never accepted a single dollar from Dominion, a state-regulated monopoly and the state's biggest political donor. I don't spend hours on the phone calling lobbyists for donations. It ain't my style. Why would I spend time doing those things when I'd rather spend my time working with and for you?

Tomorrow, come hear from numerous everyday people about the results I've been able to get for my constituents because I don't spend time doing the things mentioned above.

I think my legislative record speaks for itself, so I wanted to give you the chance to hear about the work I do behind the scenes to move Virginia forward.

Please join your friends tomorrow from 3-5 pm at MetroStage in Old Town.
We will have a good time.

P.S. Unable to attend the campaign kickoff?  That's OK.
We'll miss you, but you can still contribute to the cause.
This campaign is about more than defeating my Republican opponent in November.
Americans across the nation are disheartened by the woeful state of our national affairs.
And Virginia is the only state in 2019 where we can completely change our direction.
And it only requires two more seats...
Virginia in 2019 is the key to the momentum and excitement and massive national turnout we need to Take Back America in 2020!
The Koch Brothers are giving millions to Republicans to retain their tenuous, undemocratic, racially gerrymandered majority.
Can you chip in a few bucks to help us in the fight?
Please RSVP right now.