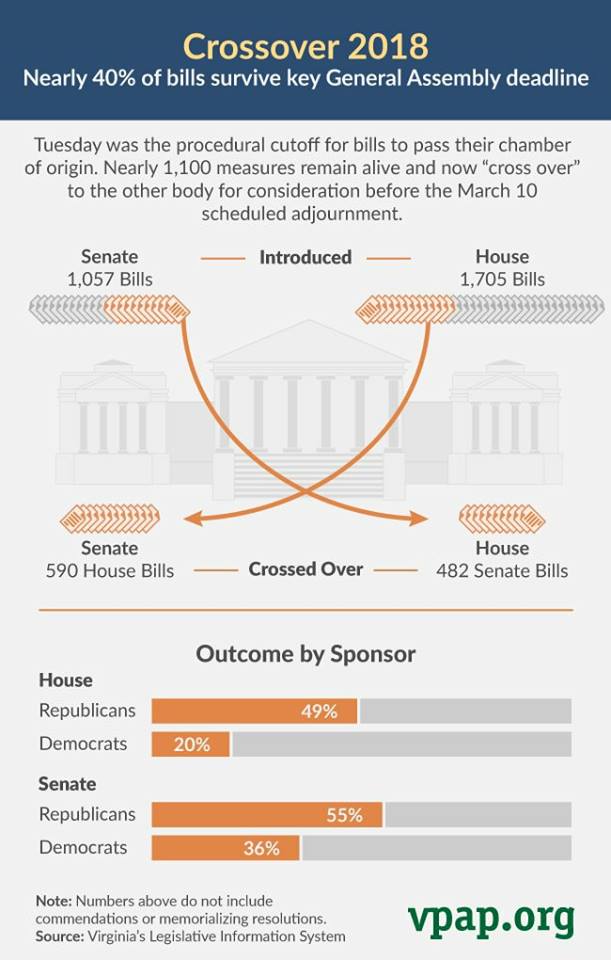 This week marked the time in session known as "Crossover" which is when all business in one chamber stops so we may take up the business of the other chamber. Moving forward, we will be hearing and voting only on bills which originated in the Senate or House bills amended by the Senate.

Many of the bills that cross over pass unanimously. But the fact that a bill is uncontested does not stop me from going through them with my staff with a fine tooth comb to make sure they are best for the 45th district and the rest of the Commonwealth. Every year, we catch some bills that "slipped through the cracks" uncontested and would likely have become law if I hadn't urged my colleagues or the Governor to take a second look at them.

Four of my bills passed the House.

This year, I introduced 27 pieces of legislation and three budget amendments. Two of my bills (animal vaccinations and Gadsby's Tavern legislation) passed in my name and are now making their way through the Senate. You can read about those below.

Two more of my bills (gas tax floor to increase NOVA transportation dollars and legalization of medical marijuana) were folded into similar Republican bills that are now making their way through the Senate. (Sometimes, when you have a good idea, the best way to get legislation you want to see passed is to let Republicans pass a bill identical or similar to yours while they take credit for it. That's how big legislation gets passed in the General Assembly under Republican majority-control.) I described those bills in detail last week.

Three of my bills passed committee and would have passed the House with majority support but were killed with procedural gimmicks.

Three of my bills (protecting children from abuse and domestic violence, protecting loved-one's rights to visit family members with Alzheimer's, and increasing funding for local law libraries) had clear majority support in committee and on the Floor and would have become law but were killed by Republican procedural shenanigans designed to deny the majority a right to vote on them. Two of those I described last week. I tell what happened to law libraries below.

Two bills -- on automatic voter registration and protecting children from abuse in treatment centers -- led to productive conversations with the Administration.

Twelve bills were killed in subcommittee. In most of these subcommittees, the Republicans retained a 4-2 majority, the same proportion they would have had if they still controlled 2/3 of the chamber.

The Republicans have not acted as if they noticed that in the last election, Democrats got more than 21% more votes than Republicans in the House of Delegates (more than 1.3 million to about 1.075 million). More than 225,000 votes is quite a margin of victory when fewer than 2.4 million votes are cast! But as you know, it was not enough. Gerrymandered district lines plus some questionable decisions by partisan judges have kept Republicans' tenuous hold on power.

Five bills were refused a hearing by the Republican Leadership. You can read about those bills below.

But I don't give up! I intend to bring many of these bills back next year, and I am confident that as soon as we have a Democratic majority, the vast majority of this legislation will easily pass.

This week, two of my bills passed the House and were heard in Senate committees:

HB 136, my bill to allow annual alcohol permits for special events at Gadsby’s Tavern in Old Town, and HB 424, my bill to enable animal shelters to vaccinate the animals in their care, both came up for hearings in the Senate. HB 136 passed the Senate Committee on Rehabilitation and Social Services on a unanimous vote. HB 424 passed the Senate Committee on Agriculture, Conservation, and Natural Resources on a strong bipartisan vote. Both will be voted on the Senate floor next week. 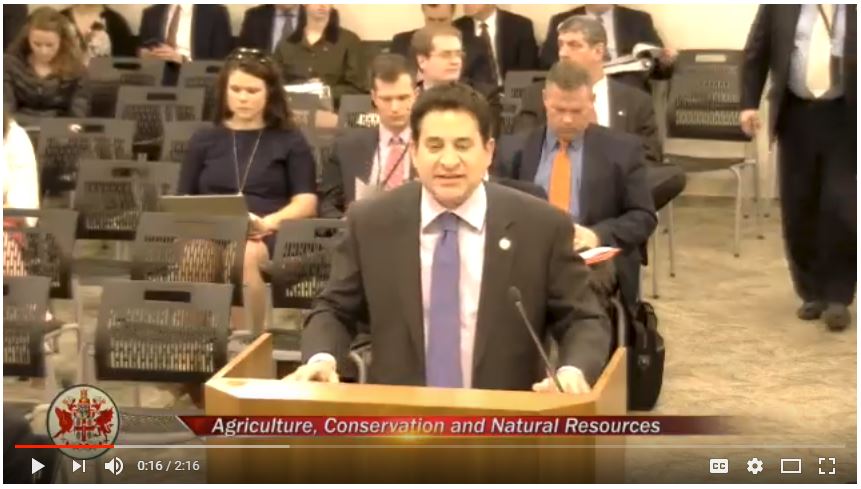 Arguing my animal vaccination bill (HB 424) before a Senate Committee.

Unfortunately, HB 702, my bill to increase funding to law libraries, was defeated on the House floor on Monday via a House Republican procedural trick. This bill had strong bipartisan support, having been voted out of the General Laws Committee on a 16-6 vote. But the Chairman of Courts of Justice moved to refer the bill to his committee after the final meeting before Crossover had been held. (Crossover is the deadline for all bills to pass the chamber in which they were introduced. Tuesday was this year’s deadline.)

Because this was a “procedural vote”, Republicans imposed discipline and forced all the 51 members of their party in the House of Delegates to vote for it, including the ones who supported my legislation (upon pain of being kicked out of the party). The effect was to defeat this popular bill that many Republicans supported. I stood up against this subversion of the majority will and demanded that the Republicans show as much respect for our localities as we show for theirs. I have consistently voted to give local governments throughout Virginia the power to act in ways they believe most benefit their localities. So it angers me when Republicans refuse to show the same respect for the people I represent in Alexandria, Arlington and Fairfax. 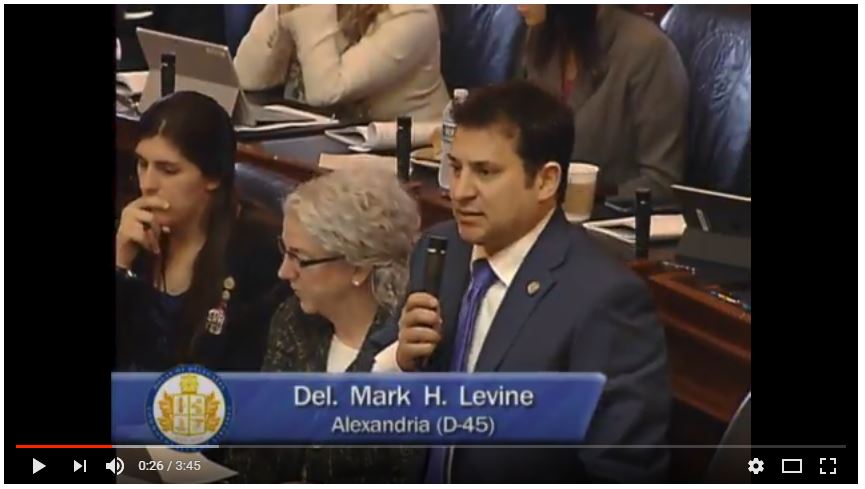 As clear evidence of the Republican hypocrisy, their leadership allowed HB 741, a Republican-sponsored bill to pass out of the General Laws Committee and go directly to the Floor rather than to the Courts of Justice Committee, even though that legislation affected the admissibility of evidence at trial and at discovery in civil actions in Virginia courts. I opposed this bill, as it would have made it more difficult to win discrimination
lawsuits. But this bill pertained to courts even more than mine did!

So using their same argument for defeating my bill on a technicality, I moved to refer HB 741 back to Courts of Justice. Of course, when it came to protecting people who practice unlawful discrimination, Republicans were determined to let it be done, even if it proved beyond a shadow of a doubt that their gamesmanship had zero basis in principle. They shrugged off the inconsistency and voted down the motion. 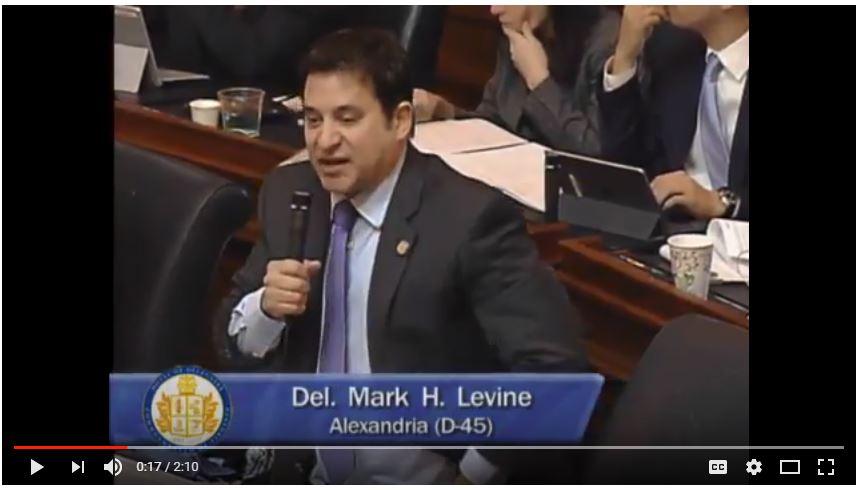 Five Bills the GOP Refused to Allow Virginia to Consider

Our region has a cost of living that is among the highest in the nation. Although the Republicans have consistently rejected a statewide minimum wage hike year after year, they should have at least considered giving local Virginia cities and counties the ability to raise local minimum wages. It is more expensive to live in Arlington than it is in Danville, and local governments should have the power to serve their citizens that way. That’s why I introduced HB 39. Sadly, Republicans refused to let anyone in Virginia even present the issue.

Under federal law, people convicted of domestic violence are not allowed to own firearms. But there are very few federal agents in Virginia who can enforce that law. I introduced HB 405 so that the plentiful state and local law enforcement in Virginia could take on this role and actually be effective. But Republicans have so little concern for victims of domestic violence that they did not even allow the bill to have a proper hearing.

A number of pedestrians have come to me to share their stories of being injured by cars in and around the 45th District. In walkable neighborhoods, it’s even more important that drivers watch out for pedestrians and obey the rules of the road. I introduced HB 426 to toughen penalties on drivers who cause serious bodily injury to pedestrians by running a red light or hitting them in a crosswalk. Too many drivers cause injuries that ruin lives due to their own carelessness and then only receive a small fine. The stories I’ve heard have been sobering, and we must do more to keep pedestrians safe. I think pedestrian safety should be a bipartisan issue, but the Republicans refused to even give HB426 a hearing.

HB 1099: Replacing Robert E. Lee in the US Capitol

Every one of the 50 states has the right to place two statues of leaders from that state in the United States Capitol. Currently, Virginia’s two statues are George Washington and Robert E. Lee. There has been controversy over the Lee statue in the US Capitol since Virginia first put it there in 1909, a few years after passing its Jim Crow laws. Virginians strongly disagree about Robert E. Lee, with some considering him a traitor and others considering him a hero. But is it really the consensus among Virginians that Lee was the second greatest Virginian of all time? I don't think so. HB 1099 would have set up a commission to decide who should be Virginia's second statue and allowed the public to weigh in and make suggestions on who it should be. But the House Republicans were unwilling to even discuss the issue. With increasing frequency, if Republicans don't want to vote on an issue, they just don't allow bills to come up for hearing.

HB 1100: No Firearms for the Violently Insane

Commonwealth’s Attorneys made me aware of a loophole through which someone who was involuntarily committed for psychiatric treatment can easily have their gun rights restored. I introduced HB 1100 to try to close this loophole and keep guns out of the hands of those whom courts have found should not be trusted with them. This common-sense change was supported by prosecutors throughout Virginia, but the House Republicans did not even allow the bill to be considered, much less voted on.

Coming up Next Week:
The Budget
And, Hopefully, Medicaid Expansion!

Los Tios in Del Ray
Next Sunday, February 25 at 2 pm

Please join us for February's Mark's Monthly Meetup one week from today, next Sunday at Los Tios restaurant in Del Ray (2615 Mount Vernon Avenue in Alexandria).

Come Visit Us in Richmond!

Things are a little slower now than they were before Crossover.
If you want to stop by and visit me in the Richmond office, please come on down! 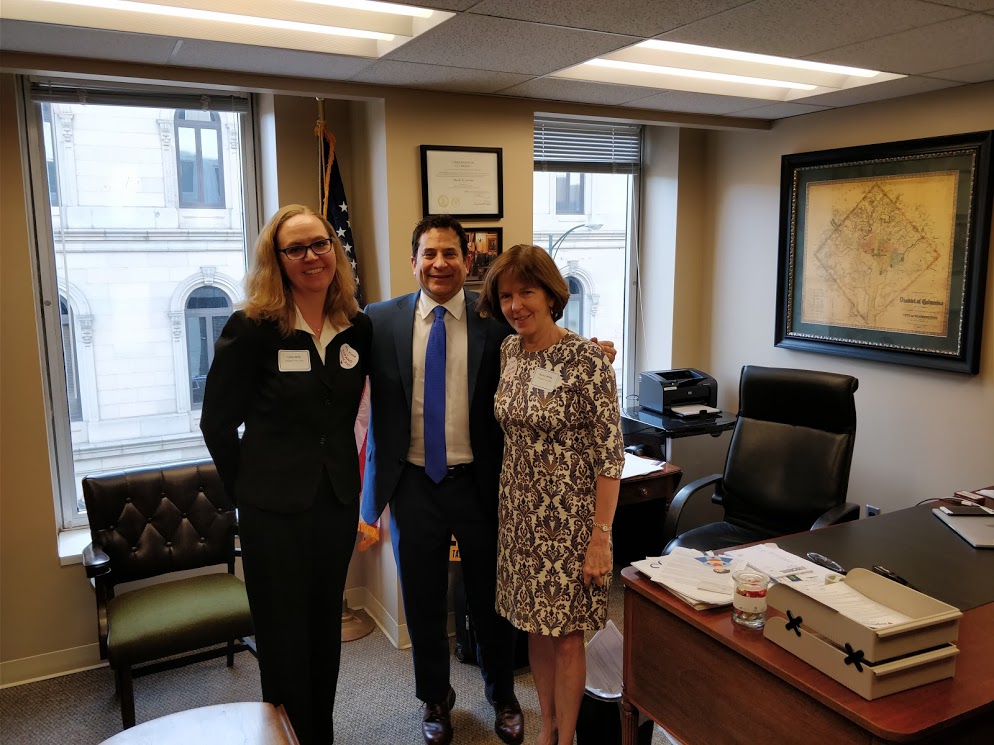 Representatives from the Arlington Free Clinic 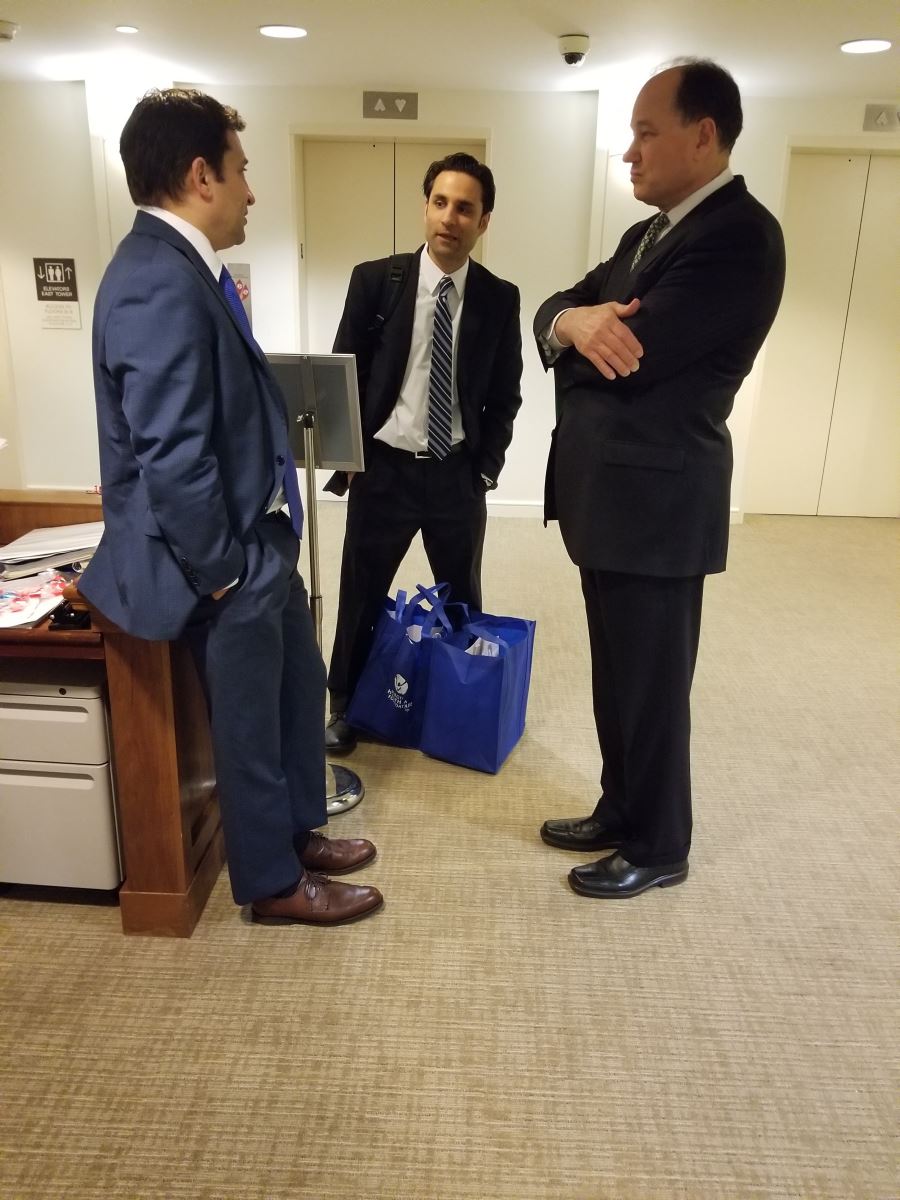 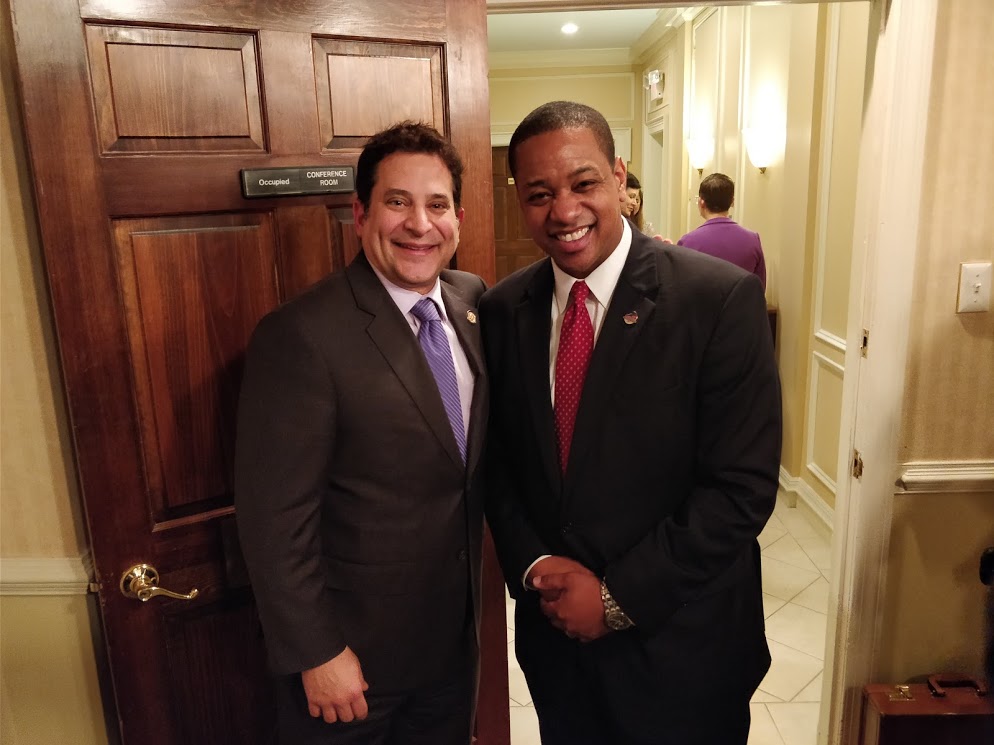 With Lieutenant Governor Justin Fairfax at a reception for NARAL