In Defense of Thomas Jefferson

MY AGENDA:
My Bills
My Legislative Agenda
My Budget Requests to the Governor

Two weeks ago, at 7:54 am on Sunday January 24 -- just as the massive snow storm was ending -- a Dominion Power electric transformer located on the corner of 18th and Fern Street in Crystal City (Arlington) failed, causing it to heat up rapidly. Pipes containing the mineral oil which normally cools this transformer leaked a massive 13,500 gallons of this mineral oil. Dominion reported the incident to the Virginia Department of Environmental Quality (DEQ) almost 9 hours later at 4:40 pm.

I believe this incident -- which, as far as I know, was not reported to the public until yesterday when I reported it to you at my Town Hall Meeting -- was the source of the eight-mile-long, ten-foot-wide oil sheen that reached down the Potomac from the airport down the coast of Alexandria and reaching almost to Mount Vernon.

The United States Coast Guard has ordered Dominion to give a sample of their mineral oil to them, and we should be able to confirm whether or not the transformer failure was the source of the oil spill by Monday or Tuesday.

If this incident is the source of the oil spill -- and, although still unconfirmed, I believe it is -- the oil escaped containment and made its way through storm sewers or other means to Roaches Run Waterfowl Sanctuary in Arlington (the pool bordered by the Airport and the 14th Street Bridge, Route 1, and the GW Parkway) and from there out to the Potomac.

When constituents informed me Wednesday evening around 6:15 pm about the oil spill, I immediately worked to confirm the reports were true, contact DEQ and the Virginia Department of Emergency Management, and get the spill contained. I notified you on my Facebook page, and I contacted the press. The spill was contained within Roaches Run by the next day. But I have to wonder, if the public had been notified sooner, whether or not less damage to the river and wildlife would have been done.

Whatever the source -- and, as noted, I believe it to be Dominion -- I will do my best to make sure that the negligent party cleans up everything and pays for damages. And I will be looking into how we can regulate containment of these mineral oil spills from transformer failures in the future to prevent this sort of incident from happening again. (It happened a month ago in Harrisonburg, Virginia and five years ago in the Potomac from a Pepco Transformer.)

I was pleased that a day later, the Washington Post reported on the oil sheen and my efforts to combat it.

WATCH VIDEO: I spoke on the oil spill in more detail at my Town Hall meeting yesterday.

Despite clear progress made in other states and around the world, it is still legal in Virginia in 2016 for bigots to (1) fire employees based solely on their sexual orientation; (2) refuse to rent to lesbian, gay, bisexual, and transgender people, and (3) refuse access to customers to public accommodations--restaurants, movie theaters, and even bathrooms--just because these bigots disagree with who a person is or who they love.

That's why I proposed a bill that would end this discrimination once and for all on the basis of sexual orientation or gender identity in housing, employment, and public accommodations. The vast majority of Virginians and Americans oppose this discrimination.

My first bill passed the House of Delegates! The Firefighters' Union asked me to author a bill that would allow Emergency Medical Services to cross state lines in an emergency. We all remember on 9/11 how DC and Maryland firefighters came to Arlington to douse the fires at the Pentagon. But legally, they had no right to do so. My bill allows paramedics from other jurisdictions to come into Virginia -- and from Virginia, to neighboring states -- through an interstate compact. In an emergency, we can't be hampered by state boundaries. I'm proud to say that Delegate Chris Stolle agreed with my bill and rolled it into his HB 222, which I chief co-patroned. The bi-partisan bill passed the House of Delegates, and I'm confident it will pass the Senate and soon be signed into law by Governor MacAuliffe.

In the two years since Virginia enacted its Photo ID law, thousands of registered Virginia voters have had to to cast provisional ballots and then come a second time to the voter registrar's office to fill out a form and have their picture taken. This was a hardship to elderly and hard-working voters, and about 3/4 of provisional voters never finished the process. My proposal would have allowed these voters to simply have their photo taken at the polling place. As cameras are easy to obtain, it would have allowed every registered voter to come once to the polling place and vote...and at no cost to the State.

The Republican reaction to the idea of letting all registered Virginia voters who showed up on Election Day to actually have all their votes counted without a cumbersome process was something akin to the Wicked Witch of the West's reaction to water. They refused to even listen to the registrars across the State (including in rural Republican areas) who strongly support my proposal. Making voting easy, fraud-proof, and inexpensive with little hassle is apparently what this Republican Committee was designed to prevent!

Most of you are familiar with my family’s story. My sister was murdered by her husband, and the courts awarded him custody of my niece and nephew because under Tennessee law at that time, killing their mother did not qualify as "child abuse". The first bill I ever wrote was to change that law, and my unanimous success on it persuaded me I could make a difference as an elected official.

So obviously, improving the child custody laws in Virginia to prevent child abuse has been a top priority of mine. HB 1009 would have ensured that a court takes into consideration the violent acts of parents when determining the best interests of the child in a custody dispute. Women from all across the Commonwealth testified in favor of my bill. I hope you will watch their powerful testimony in the video below.

I hate to admit I was surprised when Republicans turned this bill into a partisan affair and rejected it on a party-line vote. This sort of thing should be non-partisan. My bill in Tennessee passed a divided legislature there unanimously and was signed into law by a Republican Governor. When it comes to protecting children from abusive parents, we should be able to cross party lines in Virginia as we did in Tennessee.

But rest assured: I will never stop fighting to protect victims of sexual assault and domestic violence. 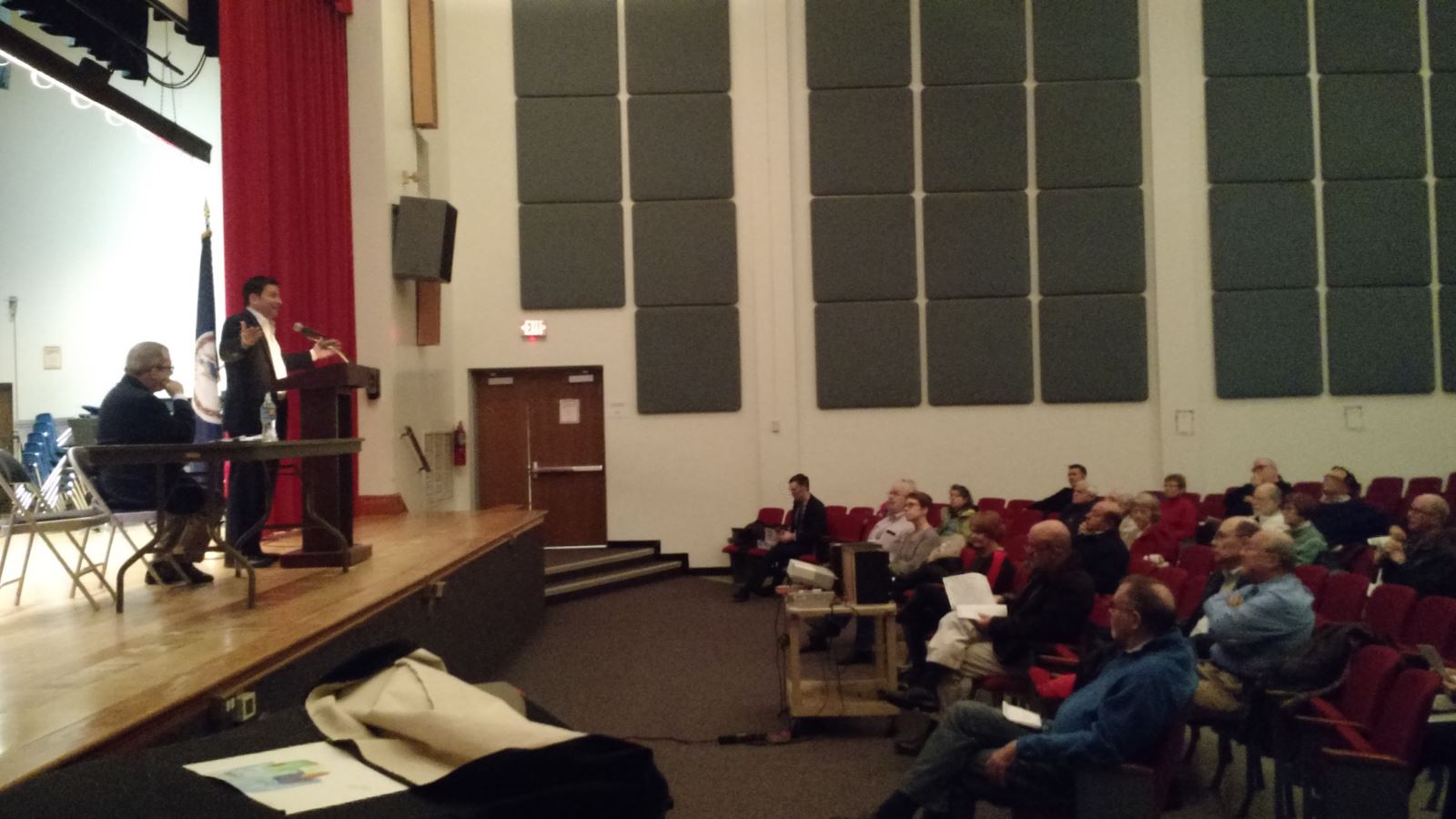 Thank you to everyone who came out yesterday to my Town Hall Meeting with Senator Adam Ebbin!

We had a great discussion on a wide range of issues: not just on my bills but on the recent gun deal, pending legislation on animal shelters, and the pending constitutional amendment on charter schools, just to name a few of the many topics raised.

My constituents are so knowledgeable about so many things. They asked good, hard questions. And we jointly informed each other. What a joy it is to represent the 45th. I don't know how legislators with less informed constituents even do it.

For those who weren't able to make it, I plan to have a town hall in March as well. And of course, you can always email me or call me during session to let me know your concerns.

I had two bright young students from Virginia Tech stop by the office on their lobby day. I really enjoy meeting constituents of all ages and discussing their issues and hopes. 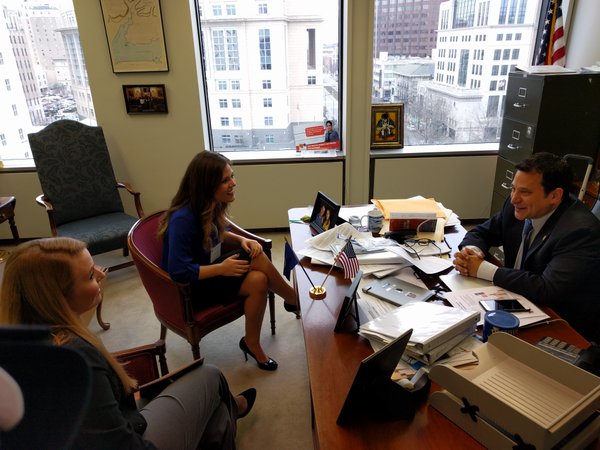 My First Floor Speech: In Defense of Thomas Jefferson's Statute on Religious Freedom

Thomas Jefferson’s Statute on Religious Freedom, one of the oldest sections of the Virginia Code, stands as a monument to religious tolerance. It was the precursor to the First Amendment and perhaps the single greatest law ever written in Virginia.

That’s why I chose as my first floor speech to oppose a bill that would presume to improve Thomas Jefferson’s immortal words. While the proponent of the bill meant no harm, I don't believe in mucking with the long-lasting history and beautiful poetry of this great statute.

I was in the press a lot last week. Check out the many links to the left. And hey, if you actually read each and every word of my newsletter and watch some videos, let me know by email or on Facebook. I know many of you appreciate the detail!