Tomorrow I Announce Founding of the Virginia Transparency Caucus

The majority of legislation in the General Assembly is determined not in public view in the ornate historical chamber of the House of Delegates, but behind closed doors in committee and subcommittee rooms in the workmanlike General Assembly Building. Although these meetings are open to the public and press, the majority of witnesses tend to be only those with a vested interest in the legislation. Oftentimes, legislation is rejected without even a recorded vote.

I believe constituents have a right to know what their elected representatives are up to, particularly with regard to legislation they introduce. Many liberal Democrats agree with me. But not only them. Newly-elected conservative Republican Senator Amanda Chase (R-Chesterfield) also feels passionately about open government.

So tomorrow at 4 pm, Senator Chase and I are announcing the formation of the Virginia Transparency Caucus. Our endeavor has already received some press attention in a major Virginia newspaper. You can read the press release here.

I plan to uphold what I call the Gold Standard of Transparency by directing my staff to video-record the proceedings on each of my bills as they come before subcommittee and committee. That way, every constituent can know exactly what was said and done on each of the 20 or so bills I introduce.

Yesterday: My Oath of Office

Friday it rained and today it snowed. But yesterday was a stunningly beautiful day as family, friends, and supporters from Northern Virginia virtually filled the House of Delegates' chamber to watch me take the ceremonial oath of office and give my first speech on the floor of the House of Delegates.

My profound thanks to all of the constituents, family, and friends from near and far (including those who drove in from Wyoming!). I only regret that I had just one half-hour, I could have used more time. I have a pretty full agenda! You can watch my speech here, here, and here. 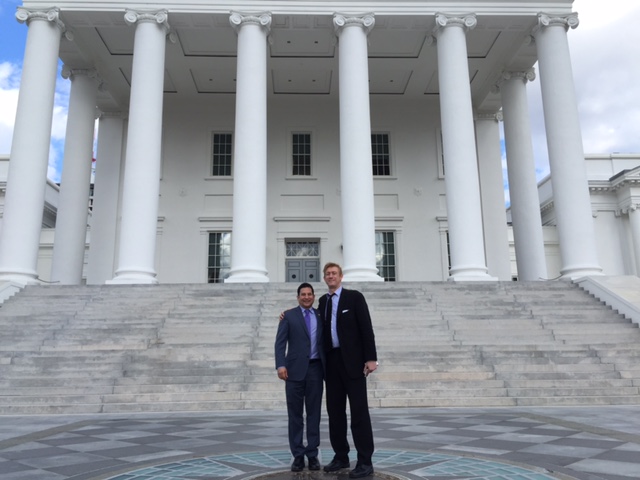 Dave and I in front of the Capitol. 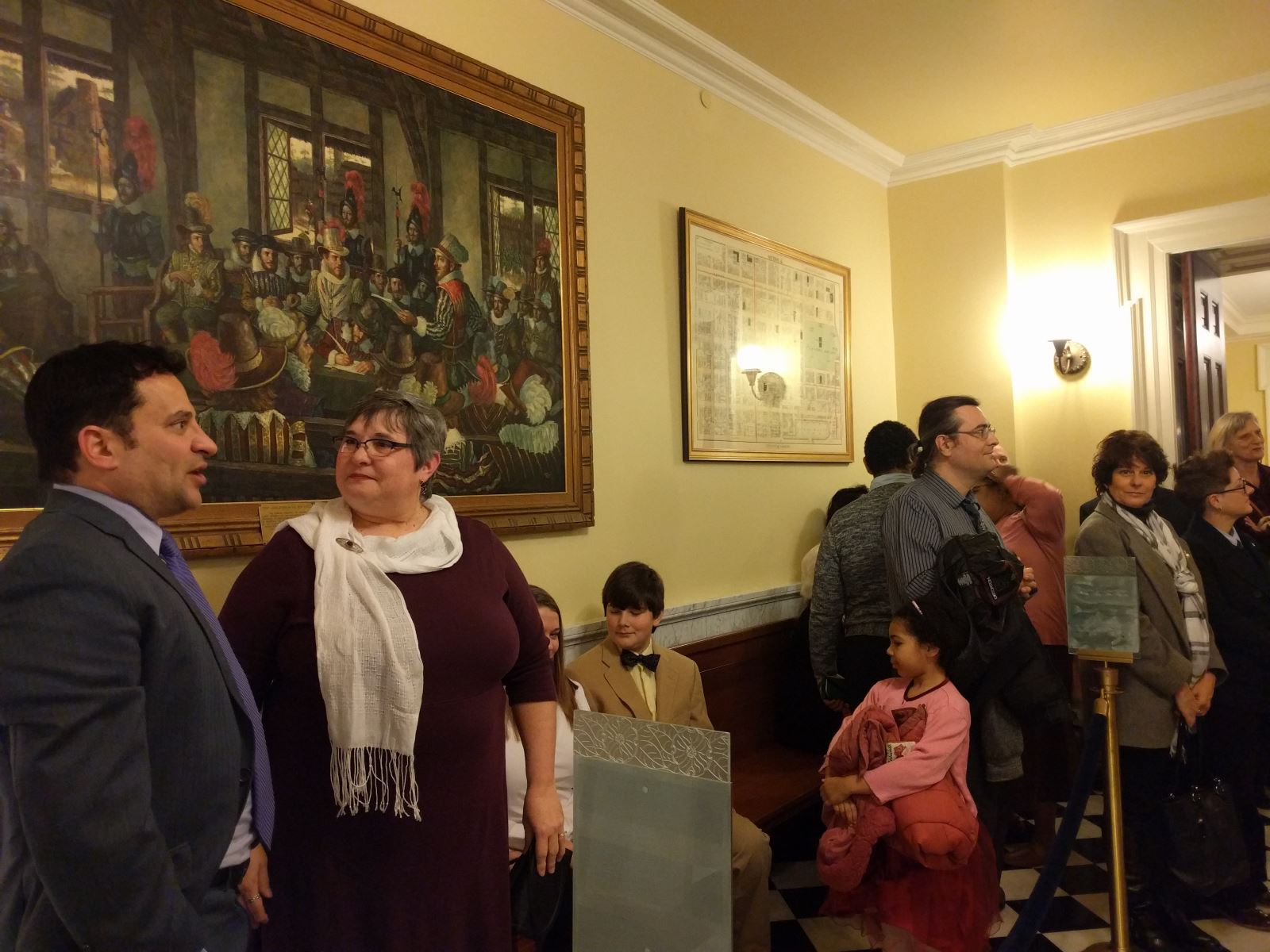 Many friends made the trip 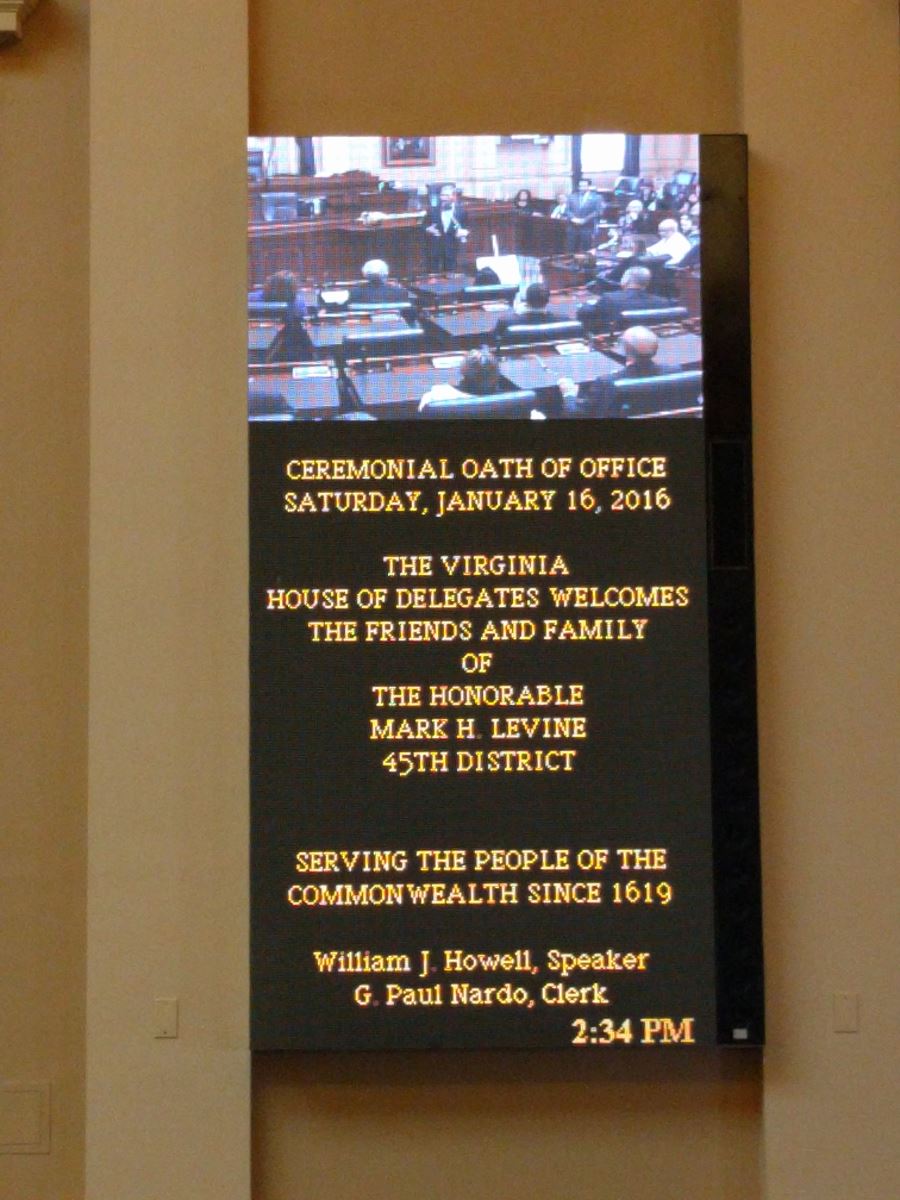 Proud to stand in a long line of public servants - since 1619! 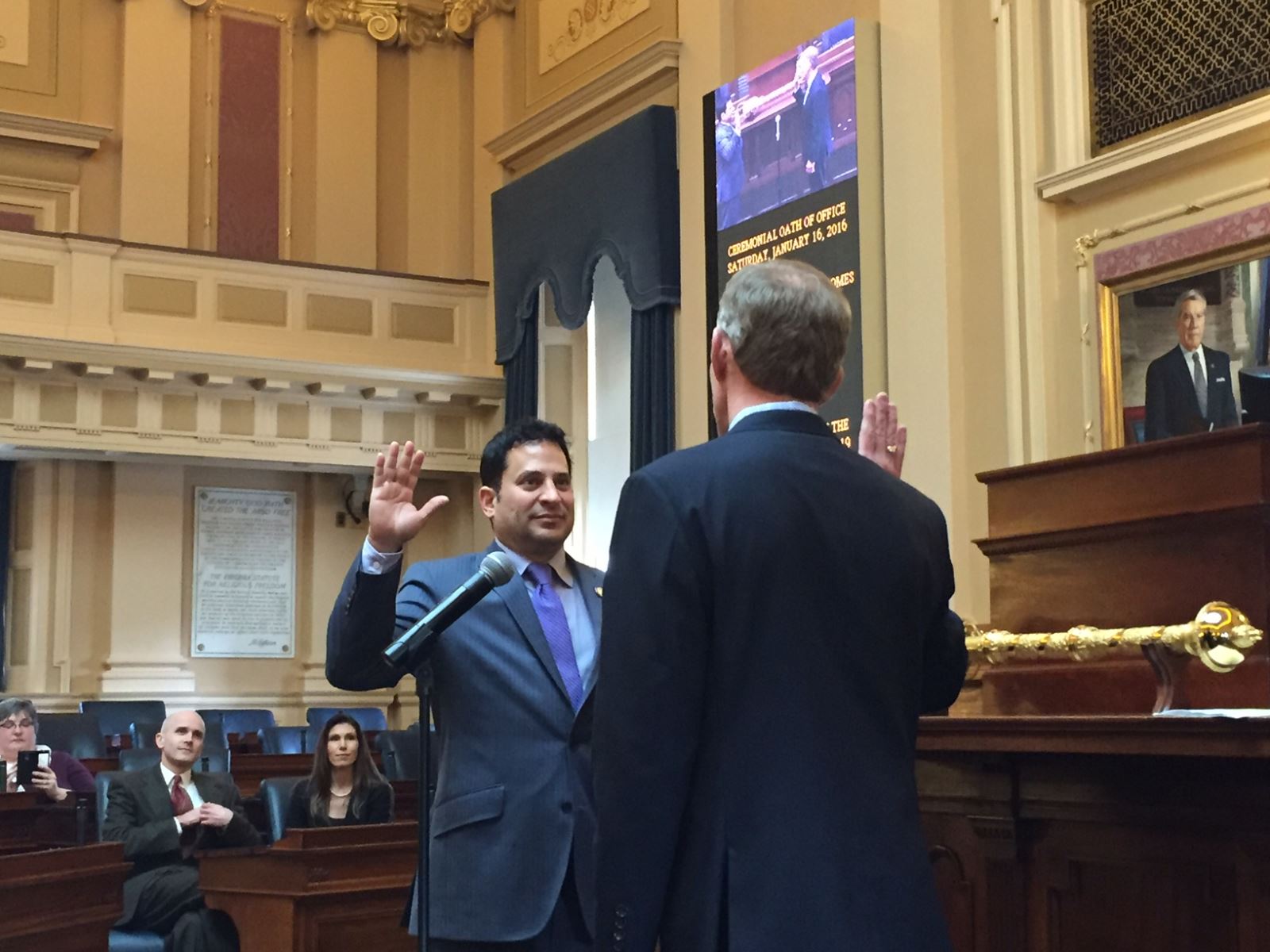 Taking the Oath in front of friends and family 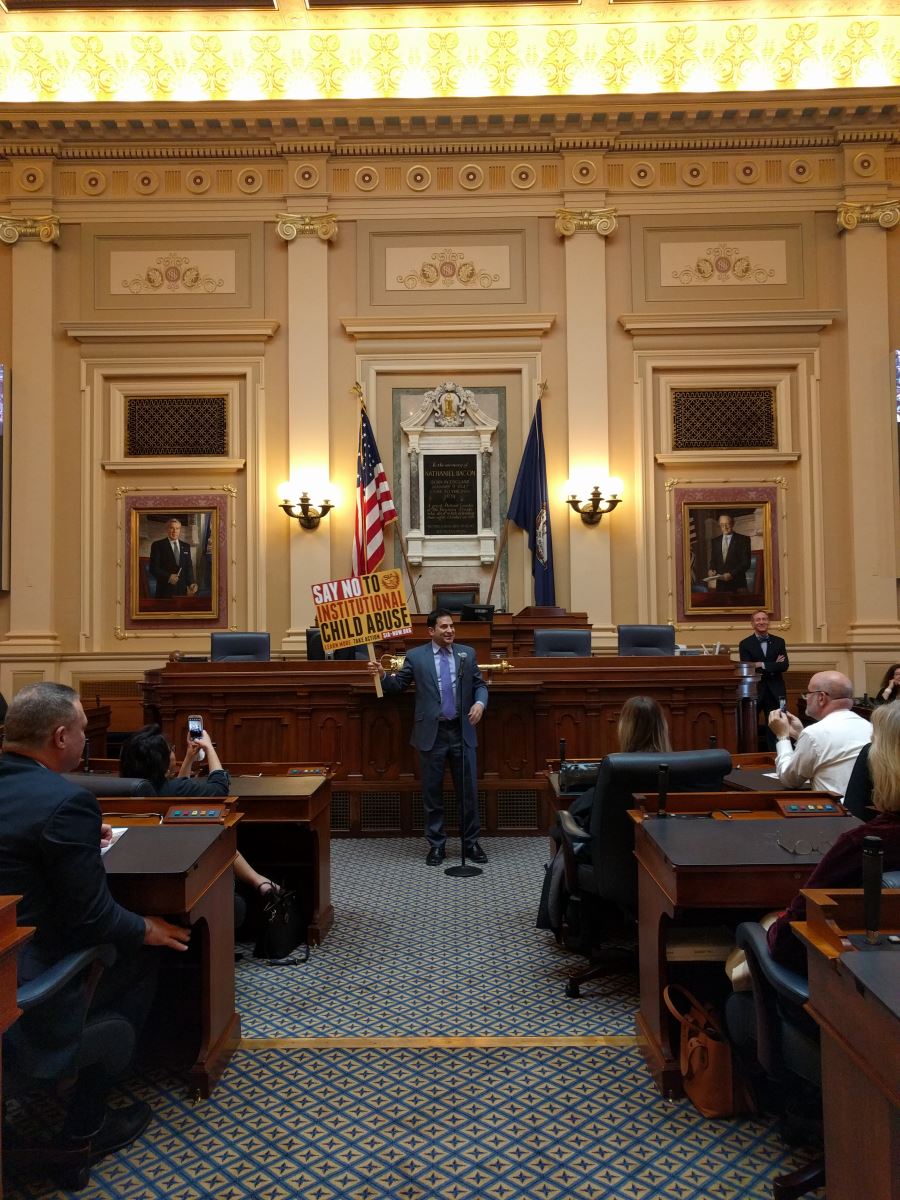 Speaking on an issue very close to my heart.

Session formally convened on Wednesday the 13th of January. After swearing in, we elected leadership. I'm pleased to announce that I was placed on two influential committees: Health, Welfare, and Institutions and Science and Technology.
I've already met with many constituents, lobbyists, and fellow elected officials. I can say that I am having the time of my life, and I'm looking forward to my first full week! 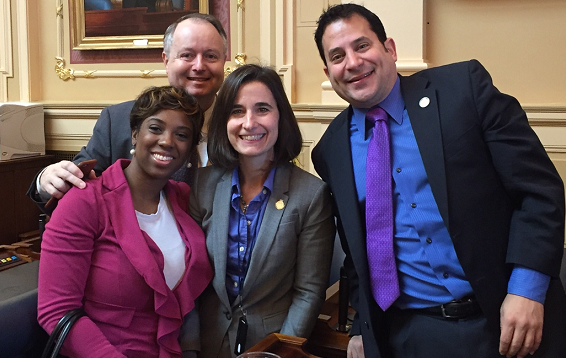 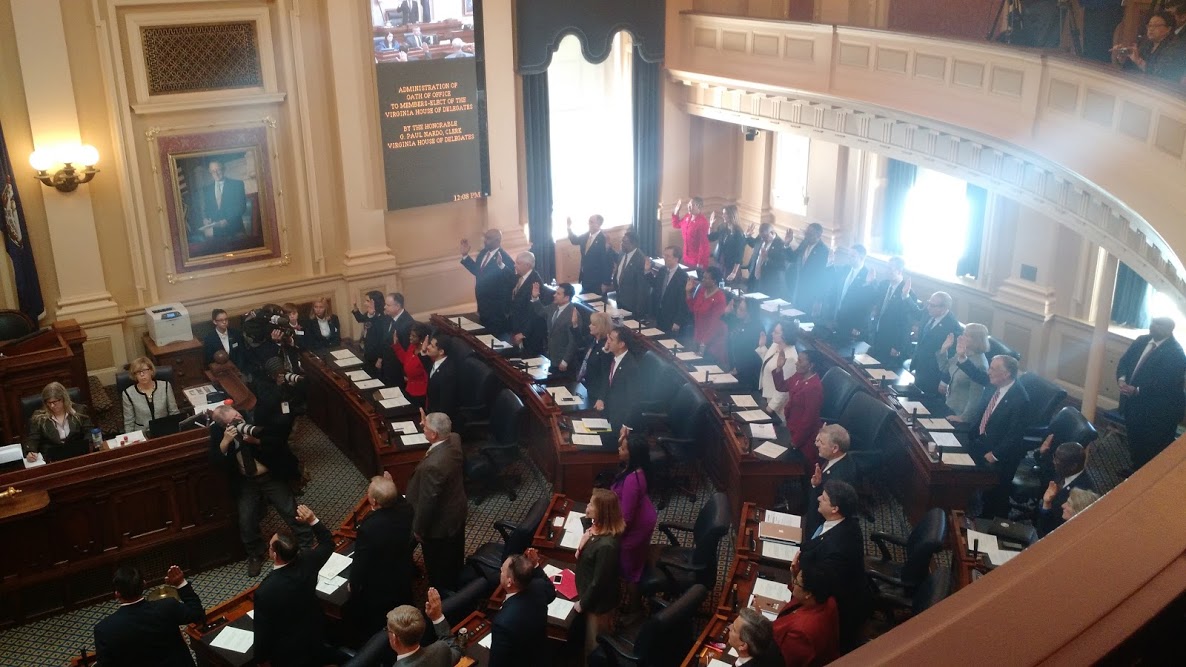 Mark Taking the Oath of Office 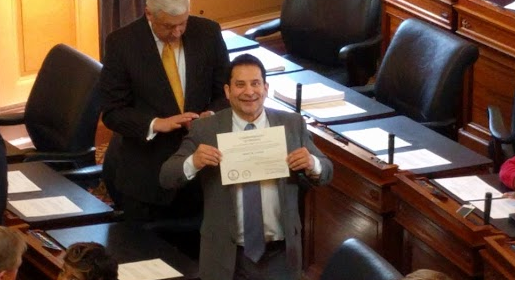 My campaign promise to make raising the minimum wage my first piece of legislation has been filled. On Thursday, I spoke at a joint CASA and ProgressVA event at the Bell Tower on Capitol Grounds on HB 995. You can watch my remarks here. 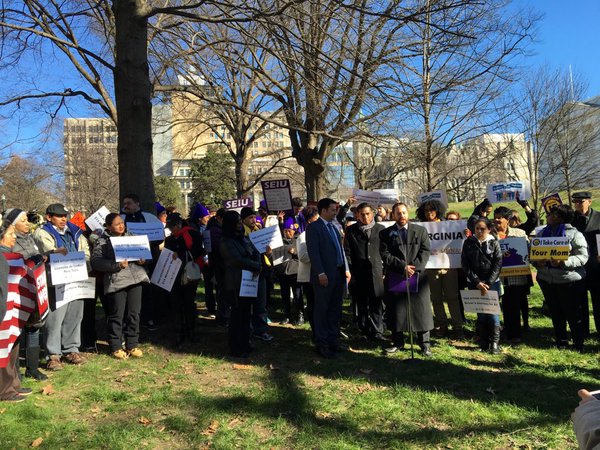 Mark with CASA and ProgressVA

As always, I look forward to working with all of you to help make Virginia a better place.