Mark was in the news SO MUCH this week that the email database couldn't handle all the information!

So we will send it in a follow-up email. Sorry!

Please join me for lunch RIGHT NOW at an informal get-together at Los Tios, 2615 Mount Vernon Avenue, in Del Ray (Alexandria). I always like to know what's on the minds of my fellow Alexandrians.

Yesterday was amazing: the largest protest march in American history. But I don't have to tell you that. Because of most of y'all were there! We not only had three times the pitiful numbers at the Trump inaugural in DC, but when you add up the protestors nationwide, we had more than 4 million Americans standing up for women's rights yesterday (and another quarter of a million worldwide).

I know, due to the massive crowds, that many of you could not make it in time to hear me speak to the Virginia Contingent of the rally on the National Mall before the march. But thank you to the hundreds that did. If you missed it, click below to hear what I said. 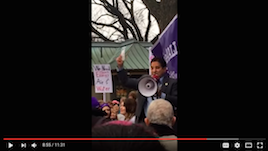 Last weekend, in Alexandria, we could not quite compete with the Women's March, but we still had quite a very large crowd by our standards as 1,000 people from Alexandria, Arlington, and throughout Northern Virginia came together to demand affordable health care at the Charles Houston Recreation Center. I spoke, along with Congressman Don Beyer, Congressman Gerry Connolly, Senator Mark Warner, Delegate Patrick Hope, and so many of our local leaders. If you missed what I said at the rally, check it out below: 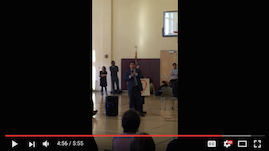 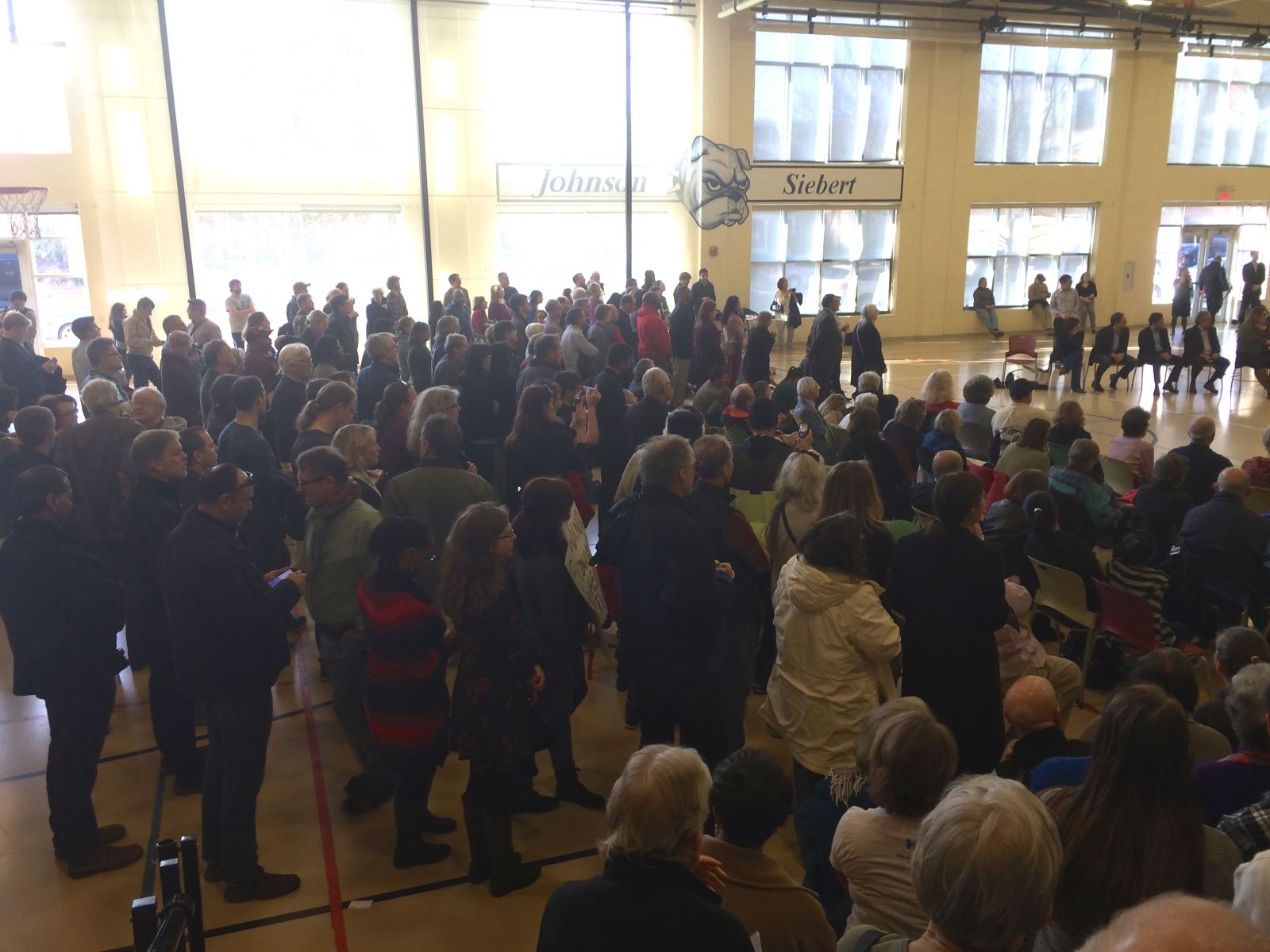 The large, rowdy crowd inspired me to work even harder every day to protect health care! 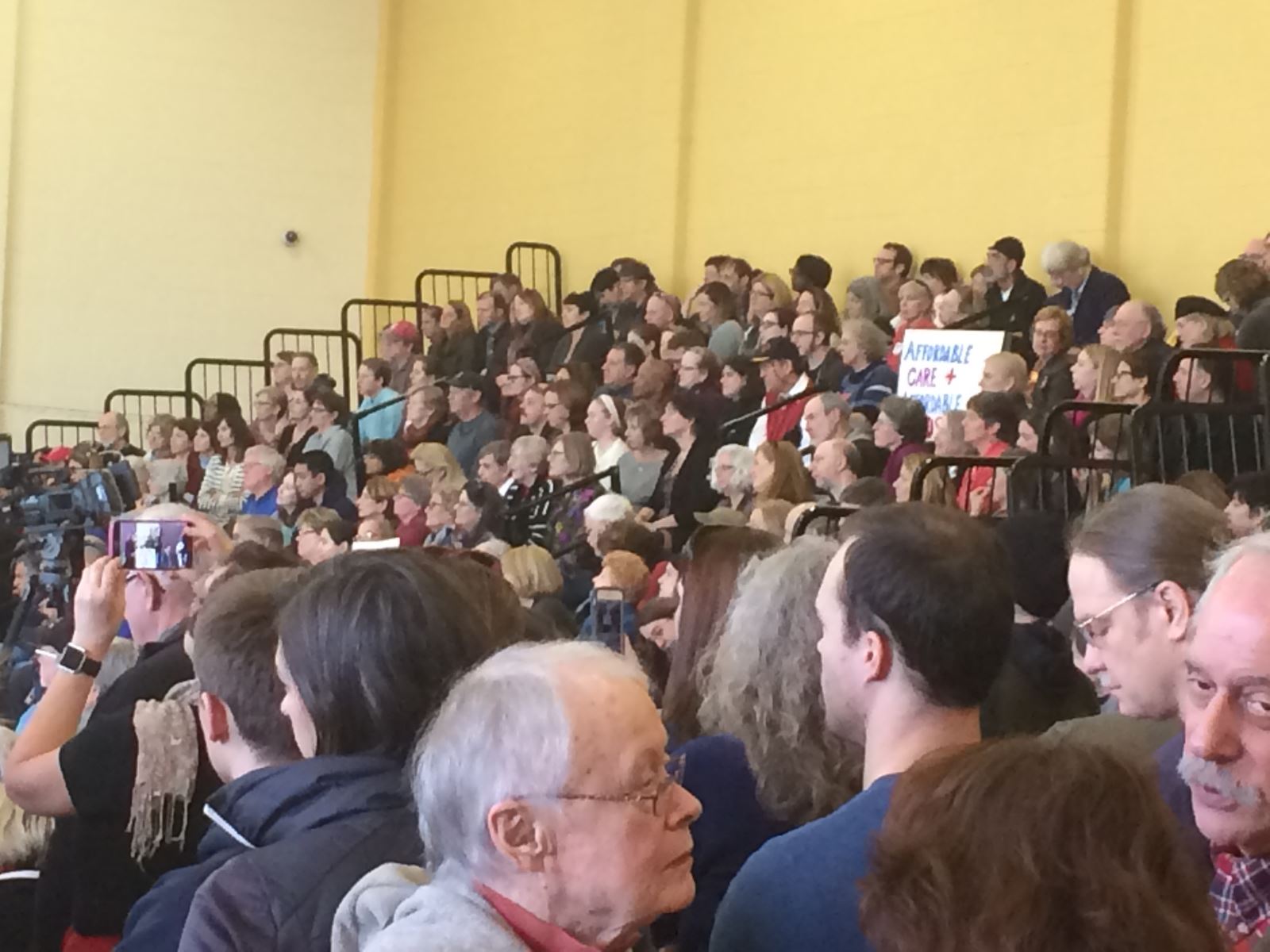 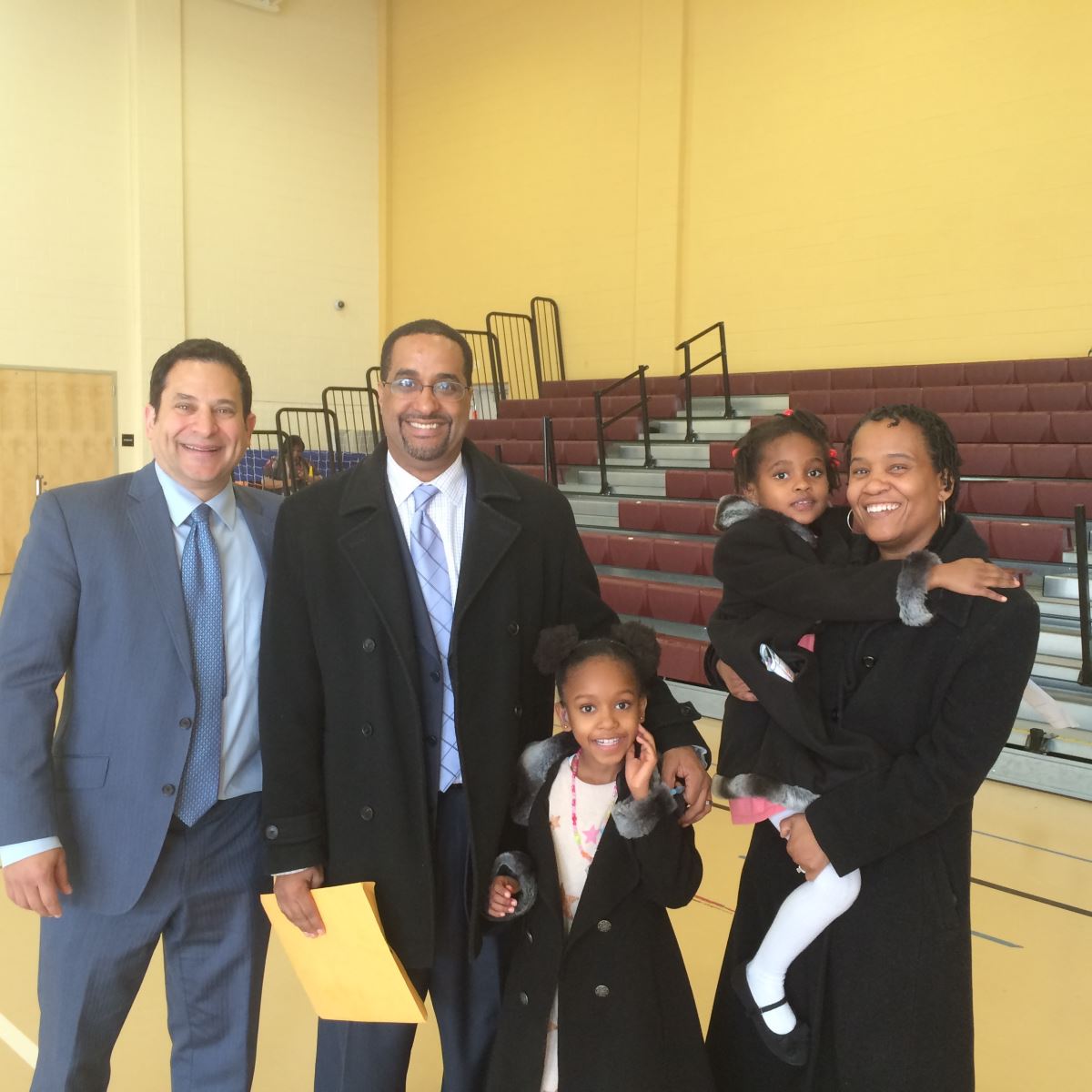 After the rally, I had a photo with Kelly and Carroll Hebron and their kids.

Am I biased? Or are the kids in Northern Virginia cuter than elsewhere?

The Week in Richmond:
My Bills Proceeding through Committee

Perhaps the one bill I introduced that got most the news coverage was my proposal to require any candidate for President of the United States to disclose ten years of past tax returns and ten years of foreign gifts, presents, and emoluments if he or she wishes to appear on the ballot in Virginia.

But I also have legislation:

So far, five of my bills have seen action in Committee and Subcommittee. Below are links to video footage of these hearings (which I committed to provide when I founded the Virginia Transparency Caucus last year). Here are those bills, in summary:

The Republicans blocked the bill without debate, in all of two minutes.

In disputed custody cases, current law allows courts to consider as evidence any past history of abuse which a parent may have, but only if the abuse was directed at a family member of the child. My bill would make clear that any abuse -- even directed at non-family members -- should be considered by a court.

I found a mother and son from Southwest Virginia willing to drive four hours each way in order to deliver moving testimony to the subcommittee.  Members on both sides of the aisle were moved by Tyler and Misty's testimony, because this is not a partisan issue: all could see abusive parents are not good parents.

Although the Subcommittee has yet to take action on the bill, it is my hope that after our extensive discussion, it will be passed by the Subcommittee on its way to becoming law. Stay tuned for more details!

My legislation, held over from last year, would have made discrimination on the basis of sexual orientation or gender identity illegal in employment, housing, and public accommodations.

As you may have heard, Del. Bob Marshall introduced a bill this year that would have taken Virginia even further than North Carolina's infamous bathroom bill. I've been getting emails and phone calls from throughout my district ever since that terrible bill was submitted, and I haven't been alone. I know that my Republican colleagues have been getting an earful from their constituents as well, and I'm pleased to announce that your hard work paid off! On Thursday, the Republicans caved to overwhelming public pressure and defeated Del. Marshall's bill.

But minutes after killing the bathroom bill, Republicans rejected equality for all Virginians under the law. They continue to encourage people to force their bigoted agenda on innocent people. I don't believe that who you love is your employer’s business. Or your landlord’s. I believe anyone who works hard and plays by the rules should be able to provide a good life for his or her family. I know you do, too. I pledge that I will keep fighting until we ensure that all Virginians can live without fear of being fired or evicted because of who they are and who they love.

I firmly support police body cameras. In difficult situations involving use of force by law enforcement, it helps all of us to know exactly what happened so that justice can be served.

Last year I introduced an ambitious bill on body cameras, with detailed requirements concerning use of cameras, storage of footage, etc.  This year's bill was a minimal attempt to get all parties on board: if a police department chooses to implement body cameras, the bill would have required that the department have a written policy on body cameras adopted after public comment. Uniquely in an environment of distrust, my legislation was supported by both Virginia law enforcement and the NAACP.

However, even this bare-bones policy met with skepticism, and the bill died once more in subcommittee. I will try again next year.

Virginia is the only State in the United States that prohibits its People from re-electing Governors. My proposed Amendment to the Virginia Constitution, held over from last year, was simple: if  voters like their Governor, they should be able to keep him/her for a second term of office. The Amendment would not apply to the current Governor or anyone running in 2017, since it first takes effect for the Governor elected in 2021. The Committee took the Amendment under advisement and will vote on it later in the session.

Hundreds of Virginians joined me to discuss the need for common-sense gun laws. 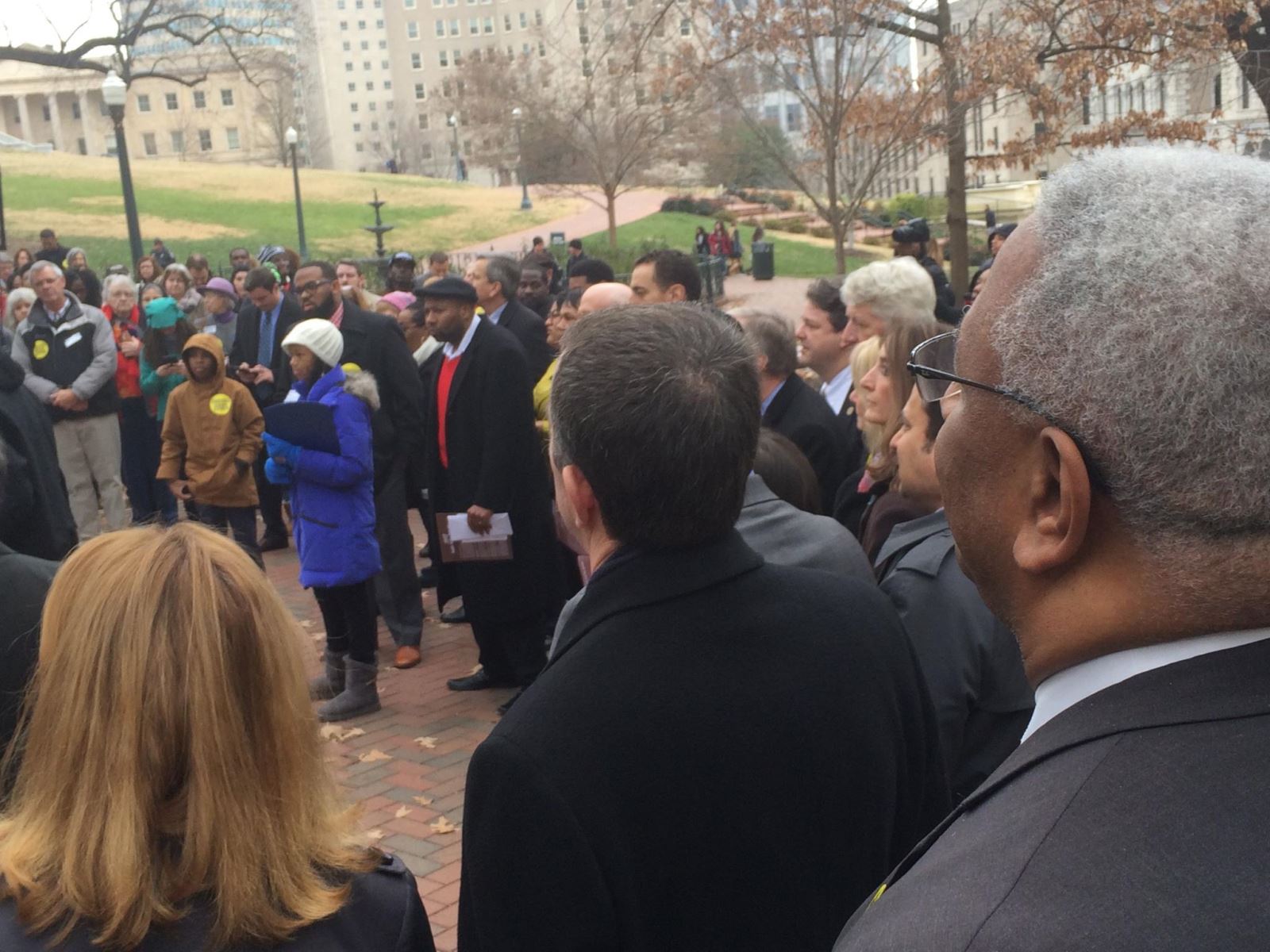 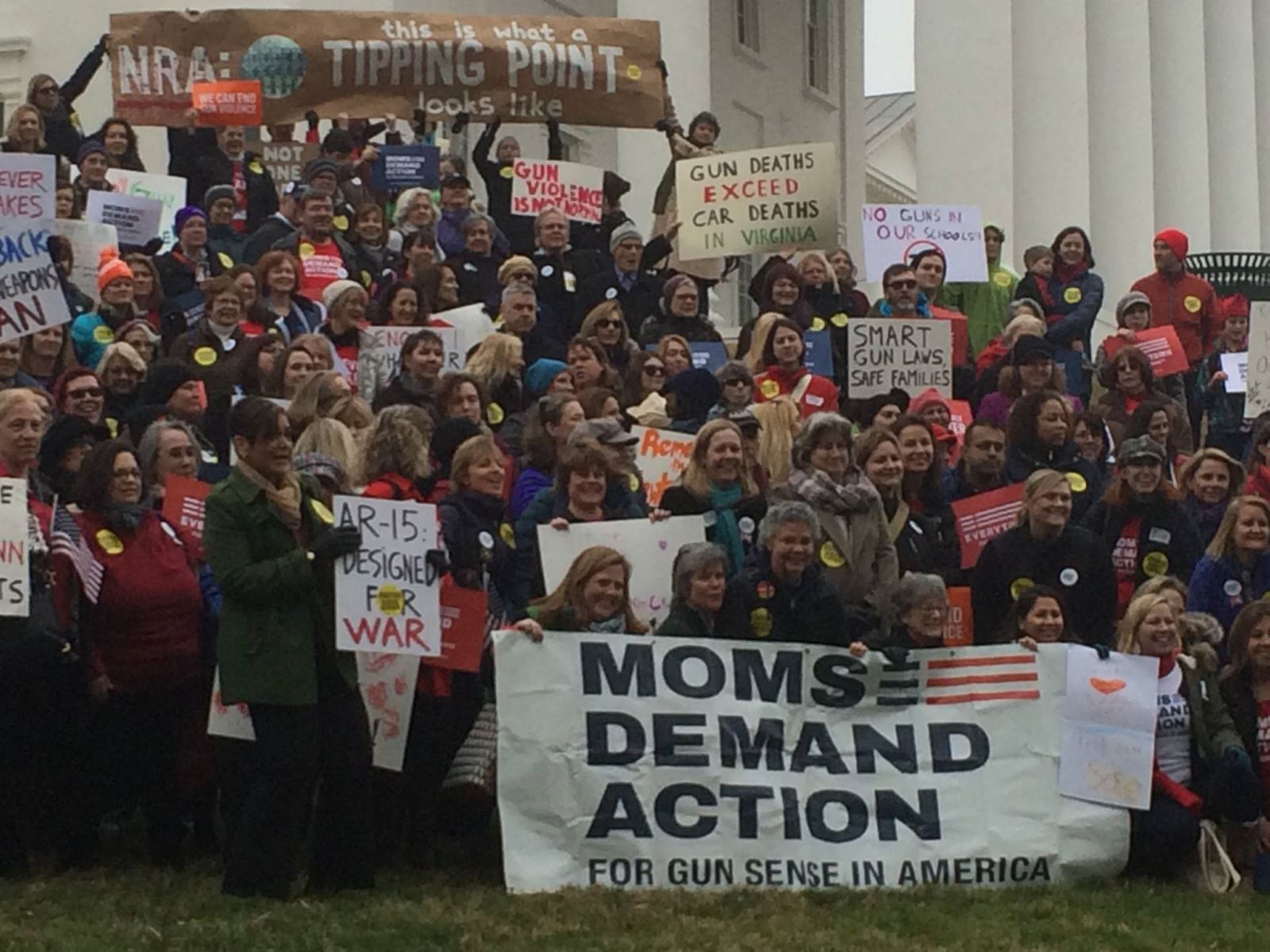 Reverend Dr. Kate Walker and congregants from the Mount Vernon Unitarian Church in my office. 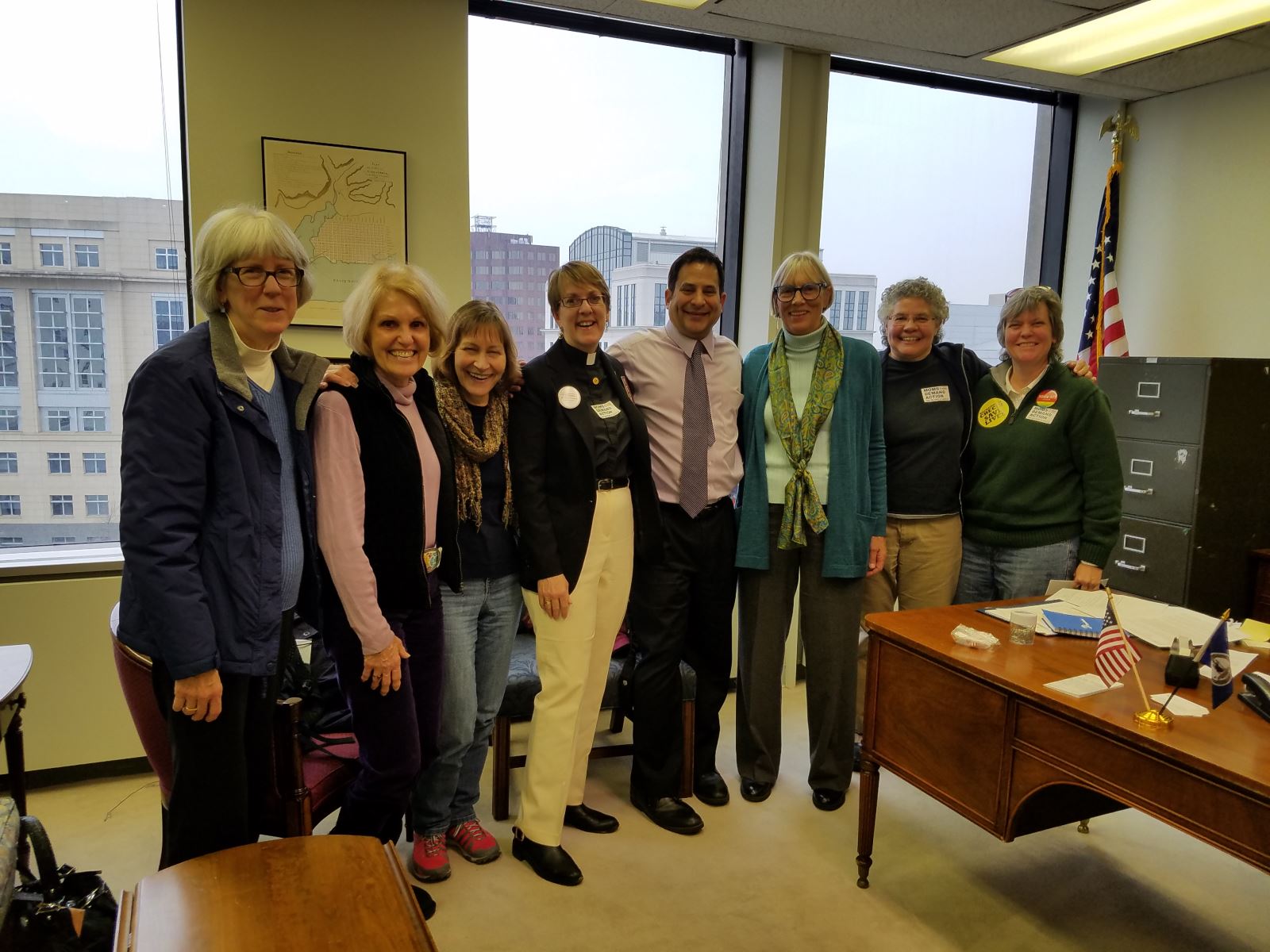 My heroes, Barbara & Andy Parker and Anne Haynes, have not given up over their personal tragedies but have instead transformed their searing pain into action to help all of us in Virginia. 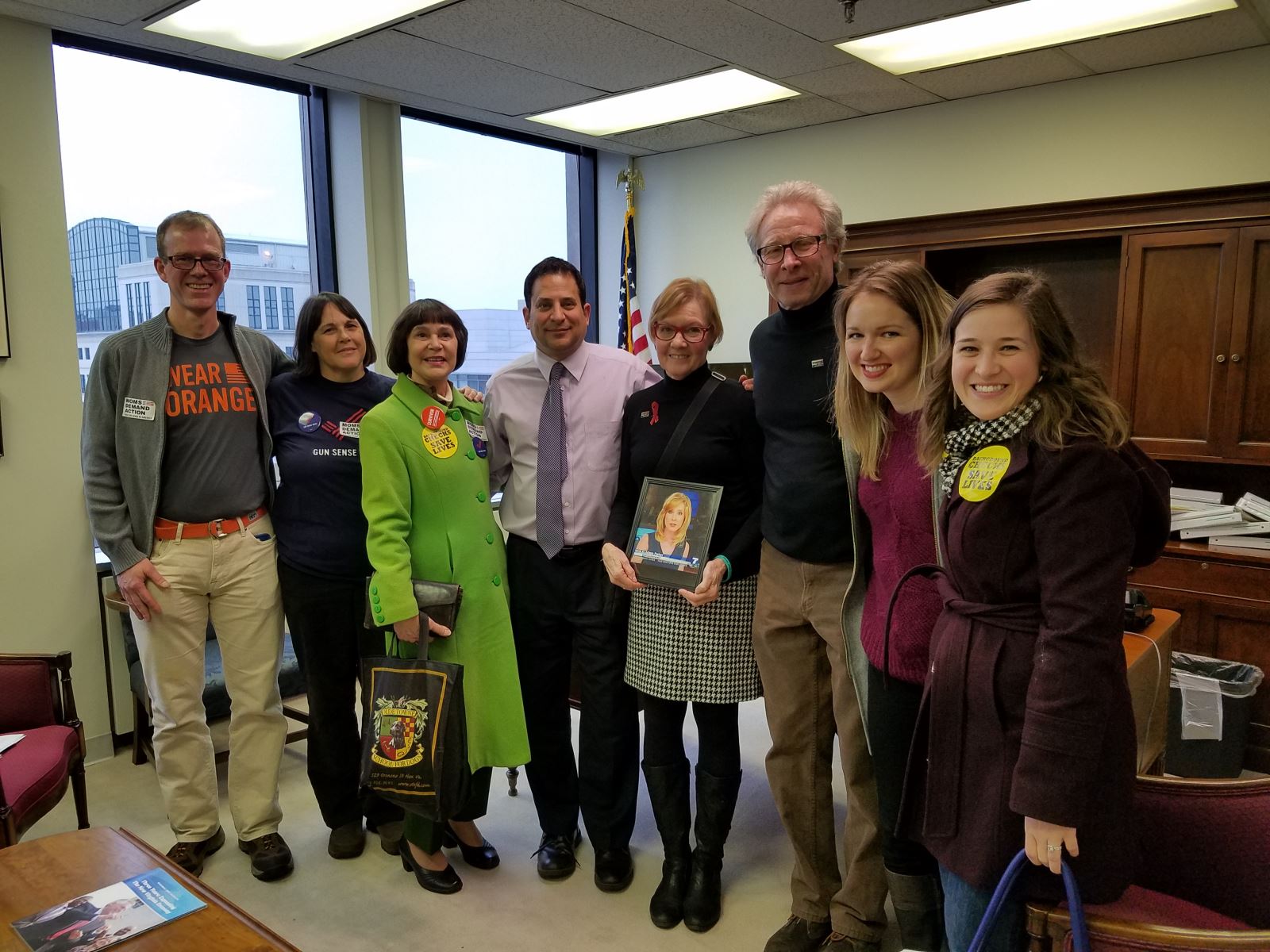 I also had three constituents come to the office to discuss their opposition to gun-safety measures, including some of the ones I had proposed. Because I have a policy to not allow guns in my office, I declined to meet with the two of them who refused to meet or talk with me unless they could do so face to face while carrying a life-threatening weapon.

I did, however, have a respectful discussion with one constituent who disagreed with me on gun policy but did not insist on carrying a weapon into my office.

One of the highlights of my week was the opportunity to give 11-year-old Christopher Stanley Ramirez, a constituent from the Cora Kelly School, a copy of the US Constitution. 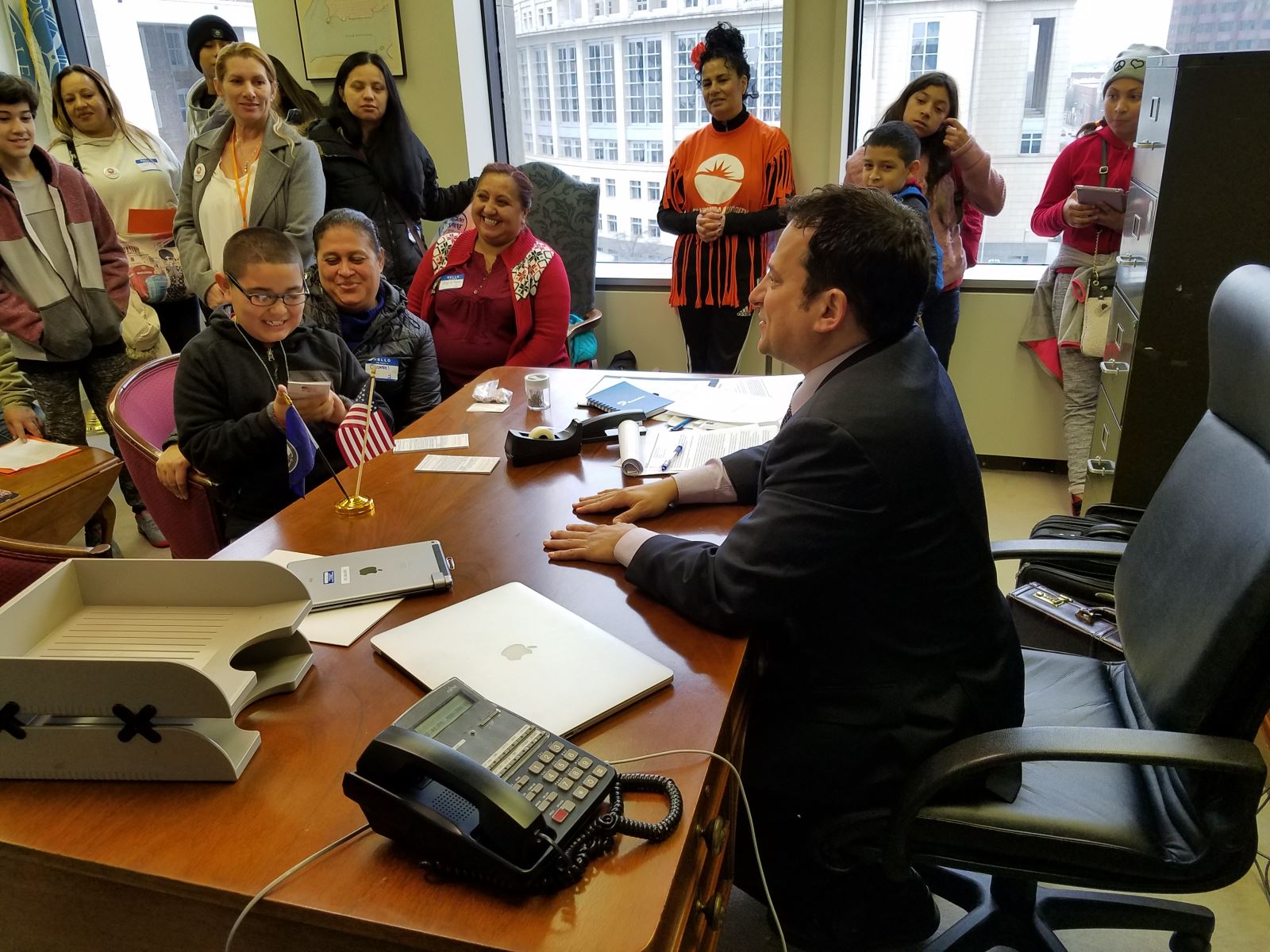 Christopher came with his mother (Cristabel) as part of a large group from the New Virginia Majority to discuss the need for immigrants to have driver's licenses so they may travel to work and school. 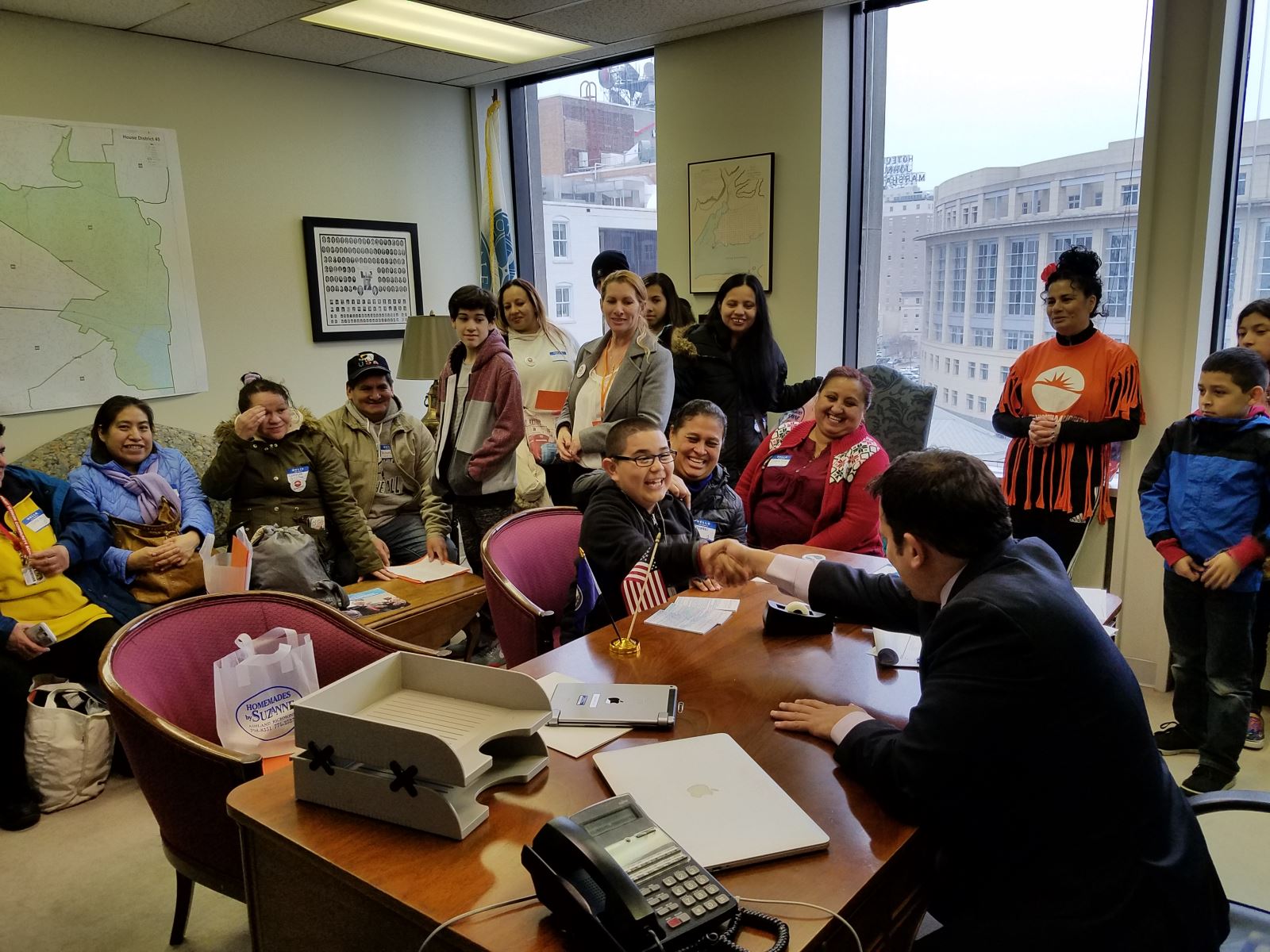 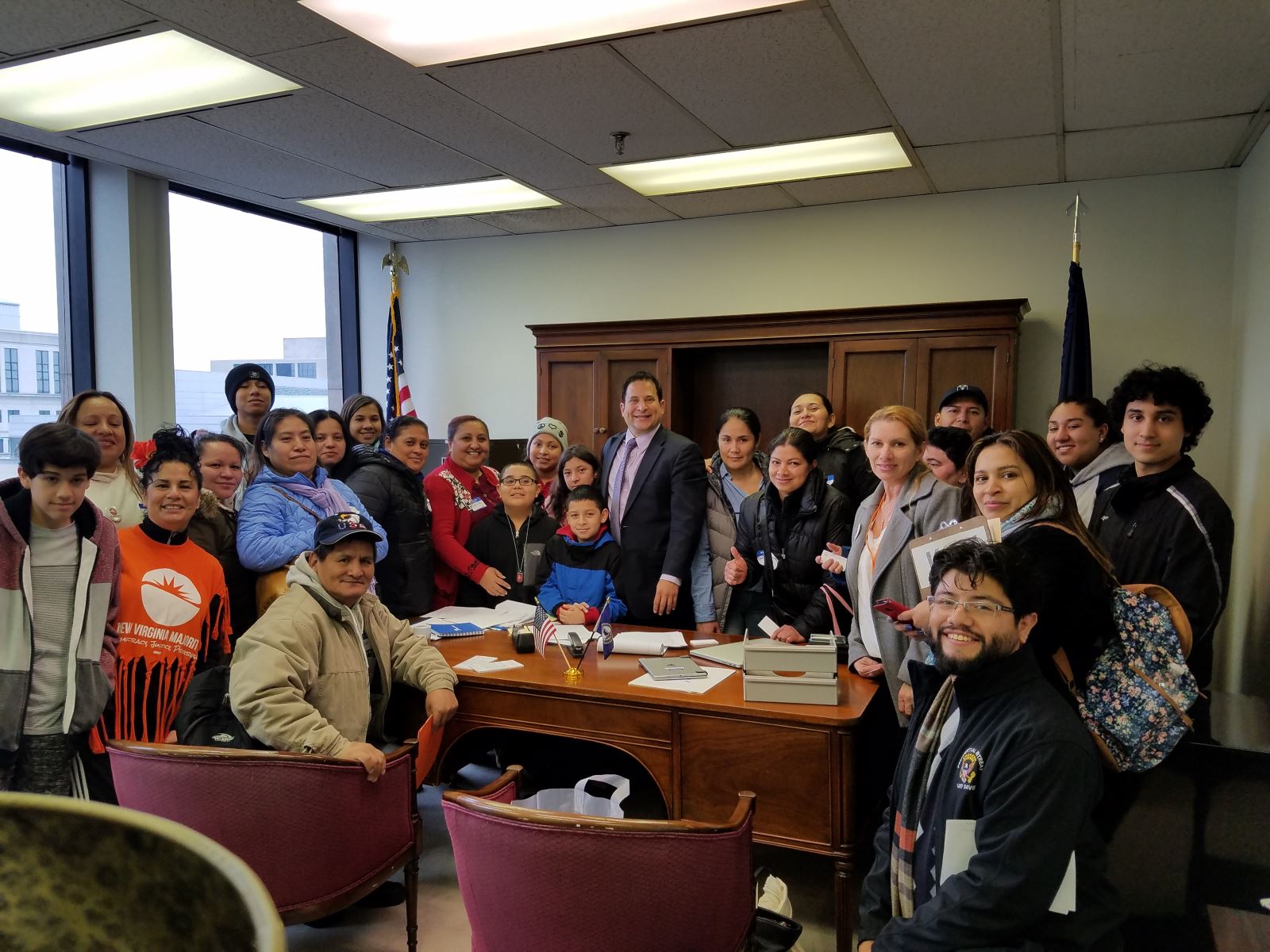 Constituents also came by to discuss health issues like affordable health care, cancer research, healthy diets, and nursing. I meet with everyone when I can. And when I am in Committee meetings or the Assembly Session, my staff meets with everyone that I cannot. They pass all the information to me. 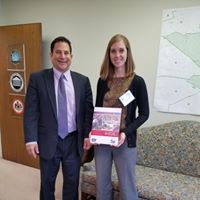 A picture in my office with Cathryn Burby from the Cancer Action Network. Other health-care groups visiting our office included the American Heart Association, the Visiting Nurses Association, and the Arlington Free Clinic. 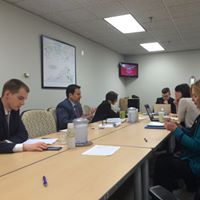 The women's Health Care Caucus is led by Delegate Kaye Kory and I'm delighted to join with her efforts to protect women's access to health care, including their reproductive rights.

And that's just a few examples...

My staff and I also spoke with constituents from the Alexandria Economic Development Commission, the Federation for the Blind, the Language Equality & Acquisition for Deaf Kids (LEAD-K), the Center for Alexandria Children, and the Humane Society, among many others.

Thank you to everyone who makes the trek to Richmond to share your concerns with me!

And Lastly, from the Floor of the House of Delegates: Defending Working People from GOP Attack

In their first week in Richmond, Republicans passed a bill in the House of Delegates on a party-line vote that would exempt large franchisors like McDonald's or Hardee's from liability for their employees. It's unconscionable to me that anyone would think that service-sector employees shouldn't be able to sue their billionaire bosses when they've been wronged by these large corporations. We Democrats stood together to oppose this bill. Once the Governor vetoes it, I'm confident we 34 Democrats can (by one vote) sustain the Governor's veto and thereby protect working-class Virginians.

Next week, on the Floor, I expect to vote against a Republican proposal to force our state agencies and localities to underpay their employees. You would think after the national election, Republicans would understand that working people matter. But no. They continue to insist that hard-working Virginians make wages below the poverty line, even when their employers are willing to pay them more!

My Democratic colleagues and I stand with the working families of Virginia, and I am committed to helping people find good jobs at good wages. As Democrats, bringing good jobs to Virginia is our highest priority, and we will do everything we can to fight off these attacks on the wages and working conditions of hard-working Virginians.

Saturday, January 28 at 10:00am
Town Hall with Senator Adam Ebbin 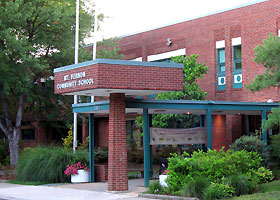 Sen. Adam Ebbin and I will fill you in on everything happening down in Richmond and take your questions on the issues that matter to you. Please come by and make your voice heard.
It is always my honor and privilege to serve you.