As you know, unlike most other states, Virginia has elections in June and November every single year.

In fact, early voting has already begun. In-person absentee voting for the June 11, 2019 Democratic Primary Election continues through Saturday, June 8.
(PLEASE NOTE: You can NOT vote on Sunday or Monday.)

For my constituents who are still undecided on how they'll be voting, I have made endorsements in each of the three jurisdictions I'm proud to represent. If you have questions about why I've made my choices in any of these races, just ask me.
Or email me.

Folks I've Endorsed in the 45th

I have no ill words to say about any of the candidates opposing the three folks I'm endorsing in the Democratic Primaries on Tuesday.

I just know that all three of the public servants I am endorsing have a progressive vision for the office they seek and the experience and skills to bring their vision into fruition.

The Clerk of Court plays an invaluable role in helping Alexandrians access the courts and justice. The Clerk of the Court handles every document in every lawsuit filed in Alexandria, as well as life events from birth to marriage to death. In addition to managing hundreds of thousands of current and historical court records, the Clerk also issues concealed-carry permits for guns and probates wills (proving they are authentic).

In my view, the Alexandria Clerk's office has fallen behind the times. Alexandria is one of the few jurisdictions in the Commonwealth of Virginia that does not allow most court papers to be filed electronically. Greg will bring us into the 21st century. He also has experience as an administrative lawyer and judicial office manager that I think gives him the know-how to get the job done efficiently.

Since he began his race, Greg has reached out to people all across Alexandria and studied what works well in Arlington, which has a very well-run Clerk of the Court under the able leadership of Paul Ferguson. I'm confident that Greg will have an open ear to suggestions (and even criticism) that all elected leaders should have when serving the public.

I particularly value Greg’s commitment to helping non-professional people navigate our complex legal system. There are many administrative tasks that simply do not require an Alexandrian to hire a lawyer to do. If the Clerk can help you probate a simple will or file an amicable no-fault divorce, you should not have to spend thousands of dollars on a lawyer.

Greg’s progressive values fuel his determination to make sure the Clerk of the Court serves everyone in the community, whether they use the Court once in a decade or every single day. Greg is smart, fair, detail-oriented, and a hard worker. I’m proud to endorse him for Clerk of the Court. 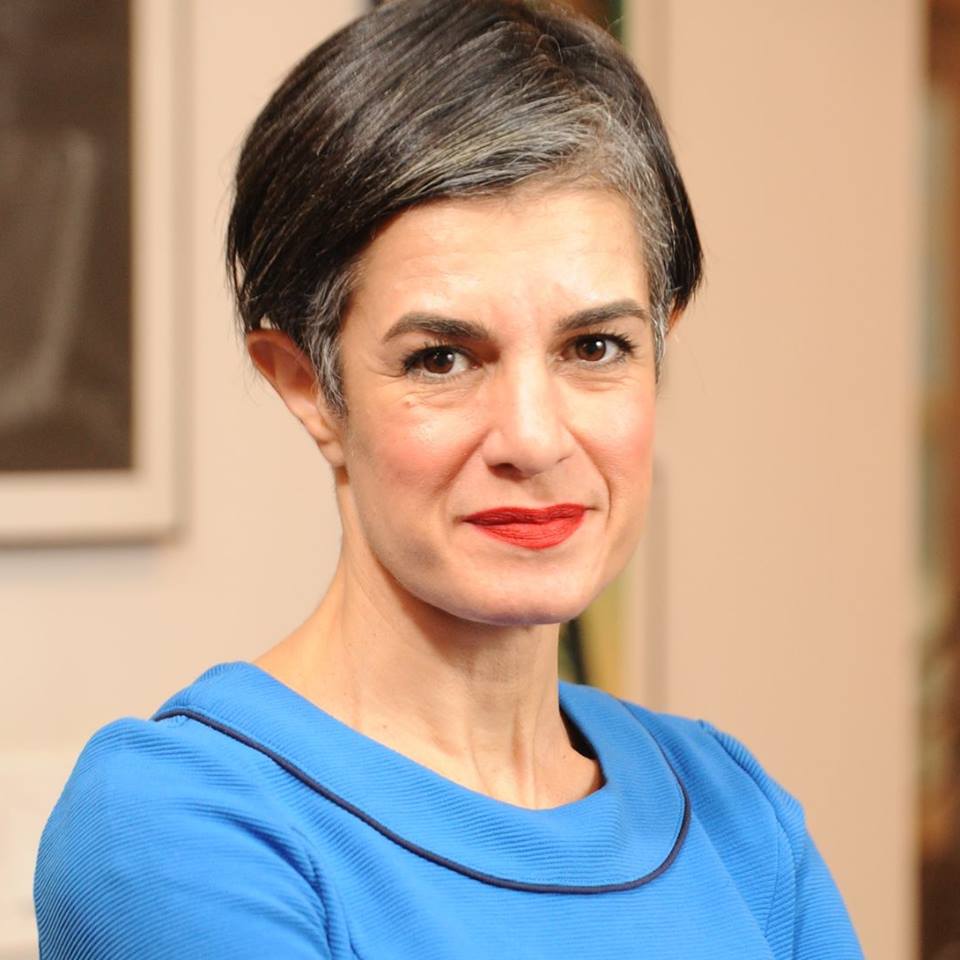 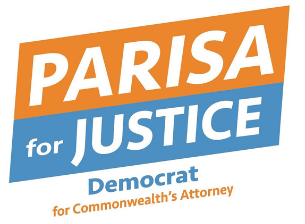 When it comes to a Democratic Primary in Arlington, voters have the opportunity – nay, the responsibility – to choose the very best person to represent our values. We can elect someone who will go beyond begrudgingly doing the right thing when it comes to issues like cash bail, open-file discovery, and voting rights. We need someone who can lead the way in reforming a criminal justice system that, all too often, prosecutes the poor, vulnerable, and unsophisticated while allowing rich and influential people to escape justice.
I’m confident that Parisa Dehghani-Tafti has the vision to take Arlington, and Virginia, in a bold direction as Commonwealth’s Attorney: one where mental health and drug addiction are seen as treatable afflictions more than offenses to be punished; one where slick financial crimes like wage theft and elder abuse are taken more seriously than petty, non-violent victimless offenses; and one where sexual and domestic assault suffered by someone who knows the perpetrator is treated as gravely as attacks by a stranger.
With her legal work on innocence protection, who can doubt Parisa’s commitment to protecting the innocent from being railroaded? But in my discussions with her, I’ve found she shares an equal passion for locking up those who pose a danger to our community and prosecuting those who prey on the powerless. Parisa understands that our safety and sense of security are of the same paramount importance to Arlingtonians as our disposition towards due process and equality under the law. I’m confident she will work to correct – but not shatter – the hapless defendant who is more trapped in life circumstances than dedicated to a life of crime. But I’m also satisfied she will have the full attention of the suffering crime victim seeking a restoration of justice.
I would expect Parisa to work hand in hand with the Arlington Delegation to Richmond as we seek profound criminal justice reform to combat racial disparities, mistreatment of immigrants, and the criminalization of poverty. We need a solid voice by our side if we take over the legislature this fall and work to remake Virginia to protect the vulnerable. She can, for example, help us reform Virginia laws to stop prosecuting marijuana possession – and start prosecuting unscrupulous employers.
I don’t take endorsing candidates in primaries lightly. And when someone challenging a competent Democratic incumbent seeks my endorsement, I hold them to a very high standard.
To meet that standard, I would need to find someone who could set up a prosecutorial system in Arlington that seeks to become the model for the Commonwealth, perhaps even the nation. It would take an out-of-the-box thinker to do this heavy lift: someone who has worked her entire life to find and plug holes in the system and someone with an openness to exploring creative solutions and working with neighboring jurisdictions.
That’s a very high standard, but I believe Parisa can reach it. I therefore endorse her candidacy.
I want to thank Theo Stamos for her 32 years of dedicated service to Arlington. In many jurisdictions in Virginia, Theo would be the best prosecutor such a jurisdiction could hope for.
But in Arlington, we can do better. 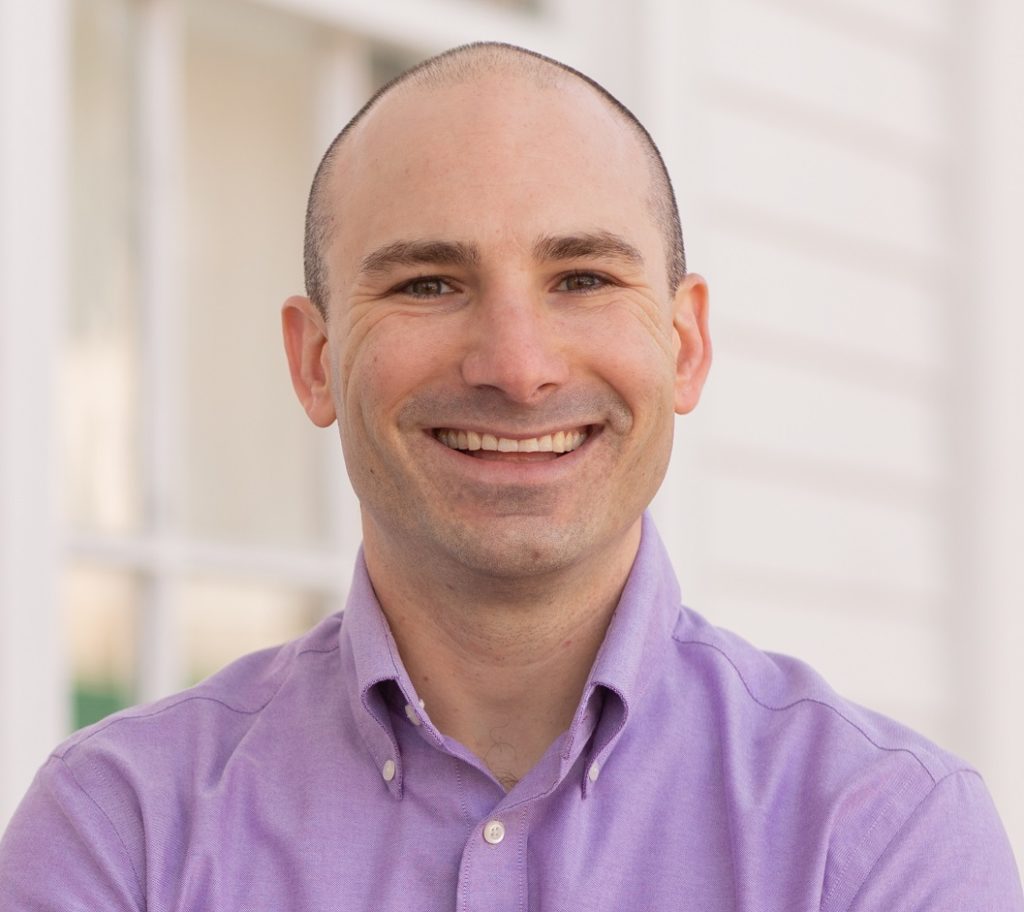 I have seen the best and the worst of our criminal justice system.
I have spent a lifetime advocating for justice, both in my years of service in the Virginia House of Delegates and in my decades of citizen activism and investigative journalism. As a trial attorney, I learned how the courts really work, and I know that justice does not always prevail.
I know that white citizens with resources and connections often get better results than those who are poor, black, immigrants and/or unschooled in the legal system.
I also know, as someone who lost a family member to a brutal murder and almost lost my parents to attempted murder, what it’s like to be a victim. I know how desperate a survivor of crime can be to make sure that a good prosecutor removes from our communities those who pose a clear and present danger to our personal safety.
I’m confident that Steve Descano shares my values and the values of our community.
Steve is dedicated to real criminal justice reform so that everyone has equal rights under the law:  poor and rich, black and white, immigrant and citizen, both those sophisticated in the legal system and those mentally ill and unable to understand it.
I’m also confident that Steve will focus on the horrific violent crimes and the criminal exploitation of the vulnerable we need him to focus on to protect our community. He won’t use up precious resources sending unruly kids or drug addicts to jail; he will opt instead for rehabilitation, which is less expensive and far more productive for the offender and the community where he or she resides.
Fairfax needs a prosecutor who understands our community’s values and is dedicated to protecting our safety while rehabilitating those who just made a mistake. We need someone who will truly apply equal justice under the law.
I believe that prosecutor is Steve Descano. 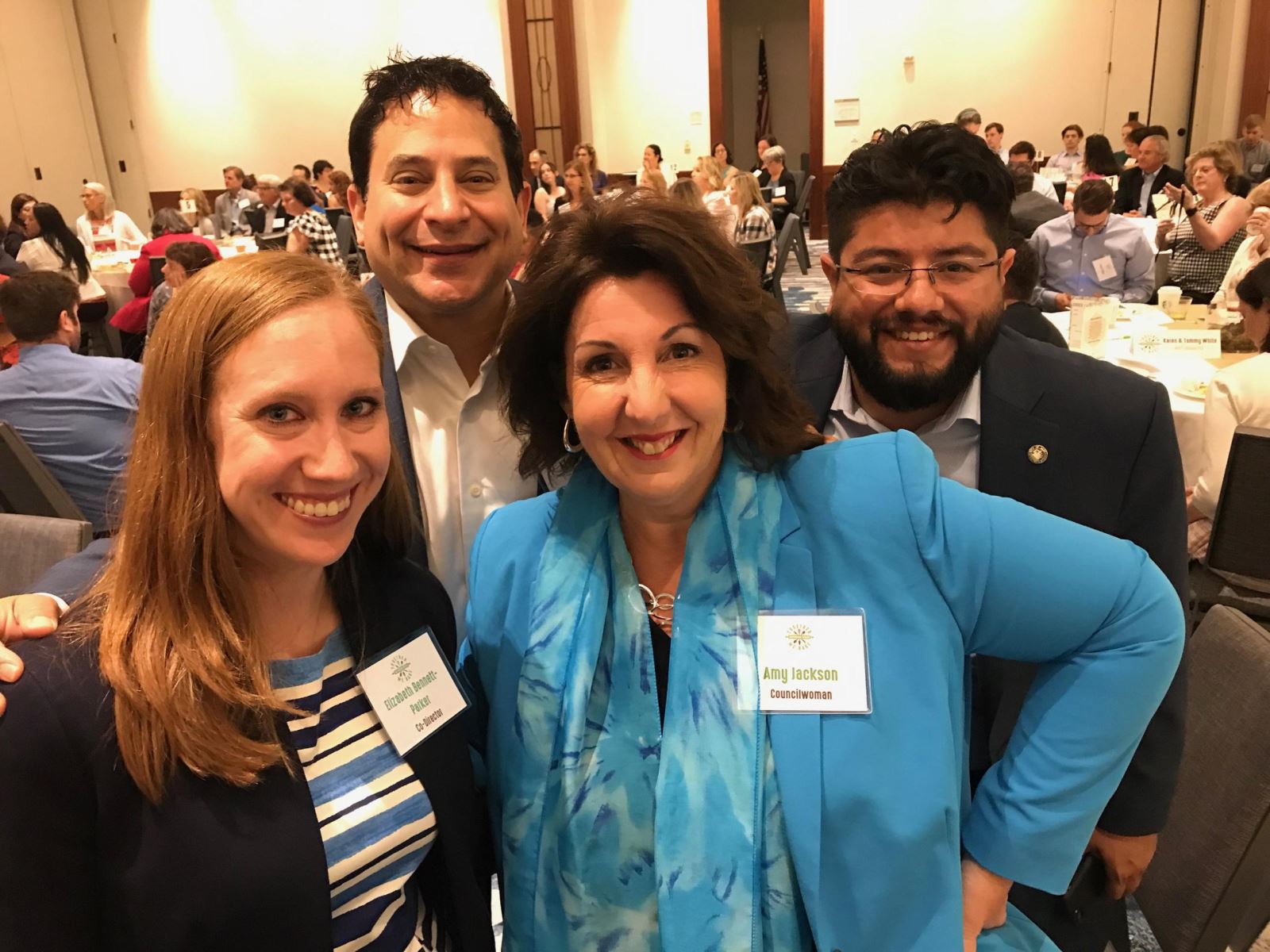 Supporting Together We Bake
with its Co-Director Alexandria Vice Mayor Elizabeth Bennett-Parker
and City Council members Amy Jackson and Canek Aguirre.
The stories of helping women get back on their feet were inspiring.
They reminded me of how often abuse and poverty continues from generation to generation
and how the right help from one's community can break the vicious cycle. 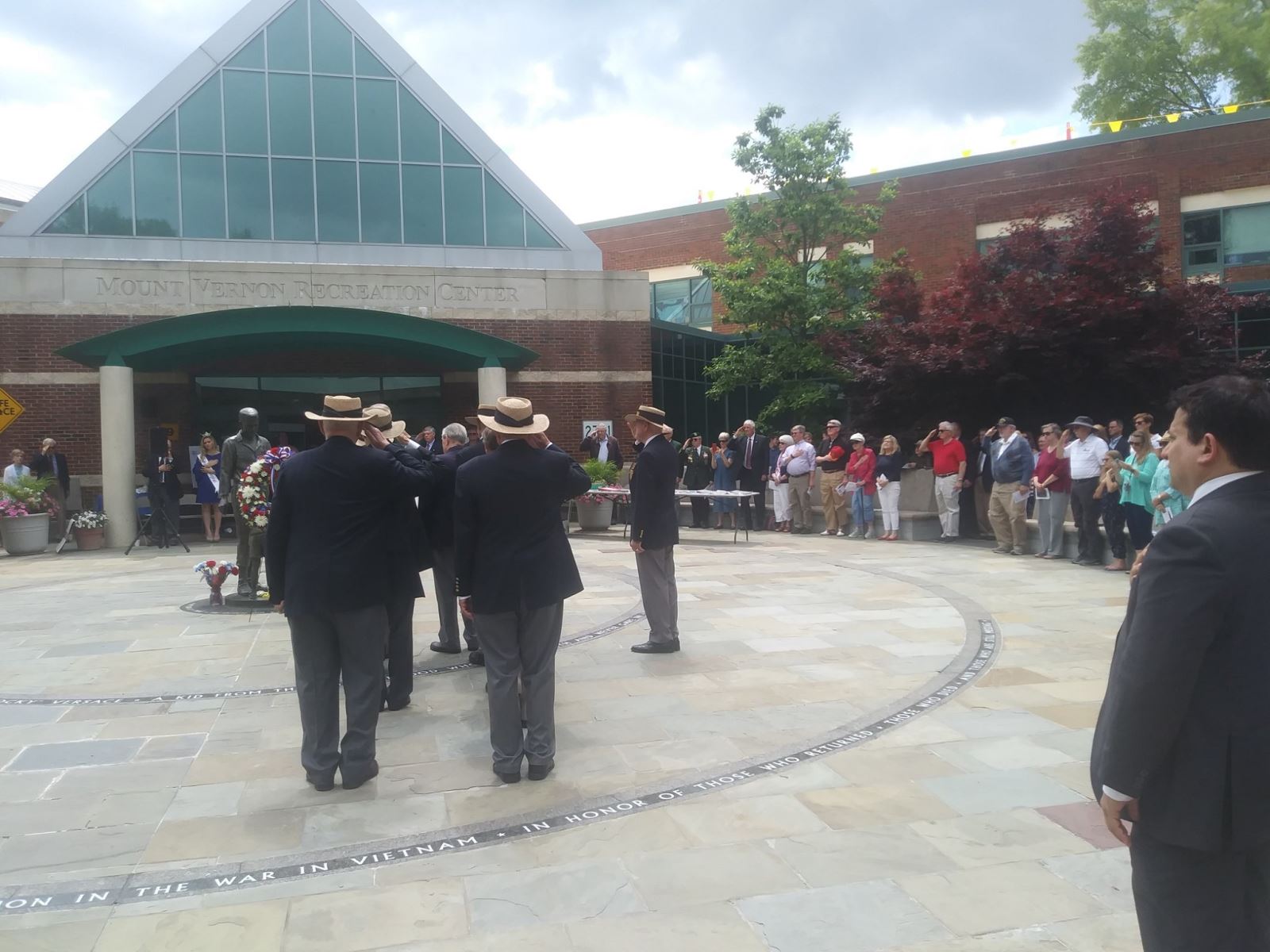 We had a large crowd at Alexandria's annual Memorial Day ceremony.
The names of Alexandrians who died in service of our country,
including Medal of Honor recipient Rocky Versace, were read aloud. 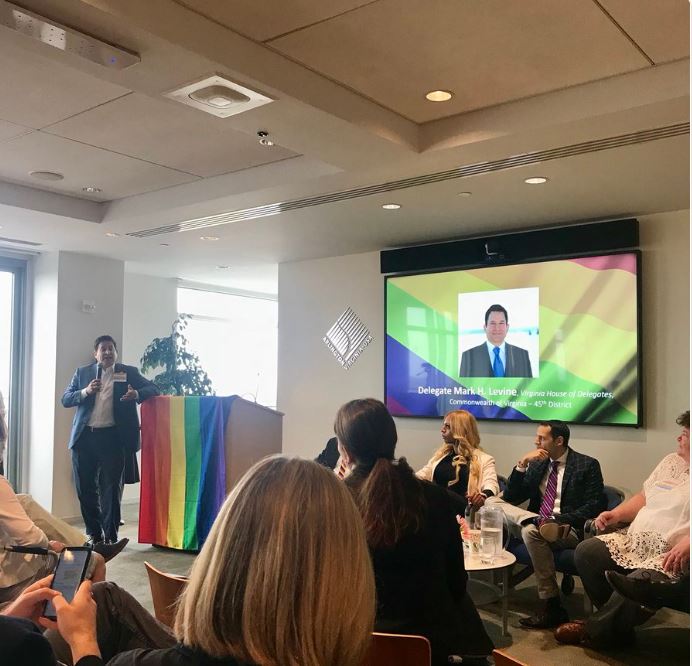 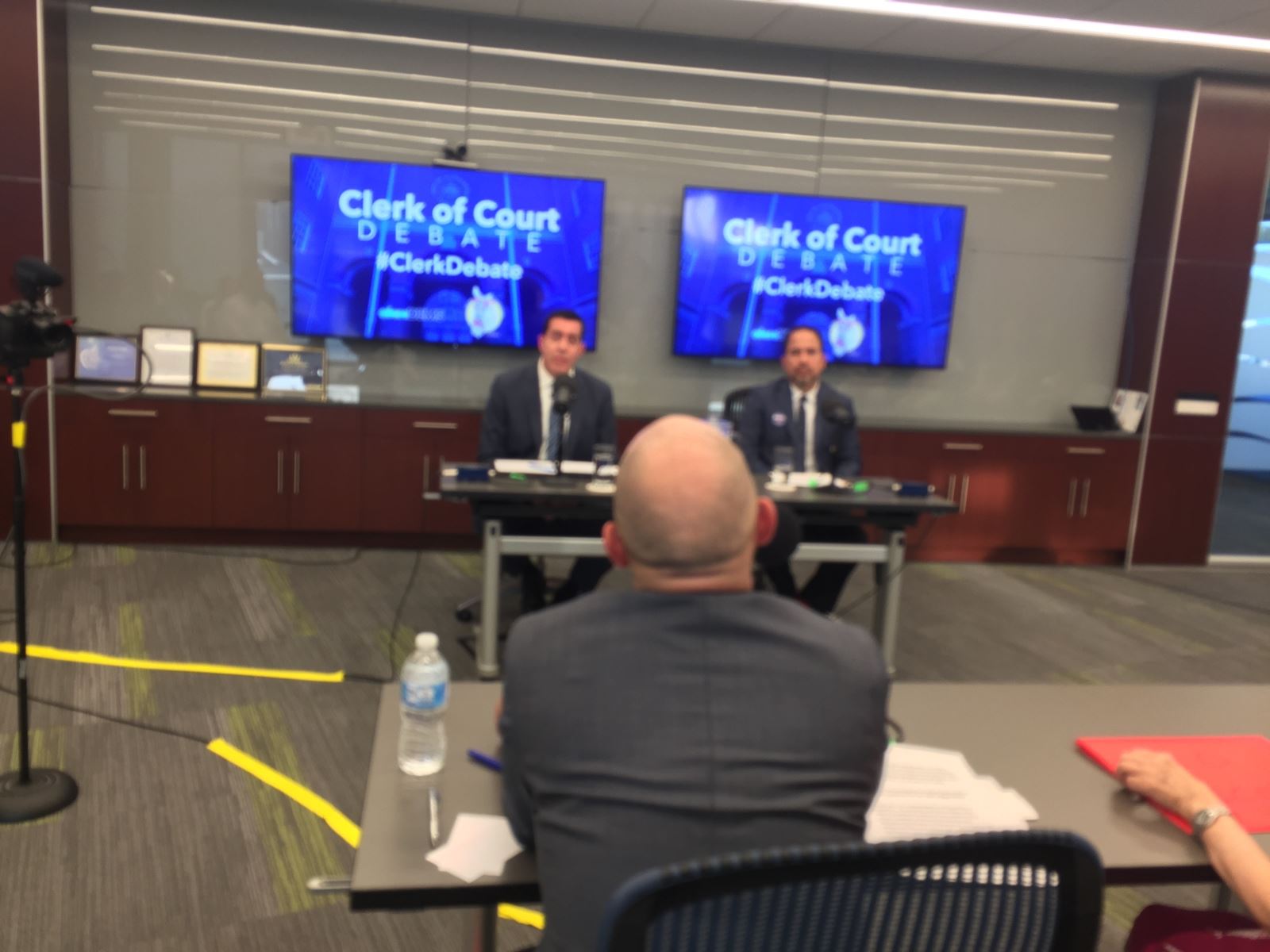 Lots of folks at the June ADC meeting. 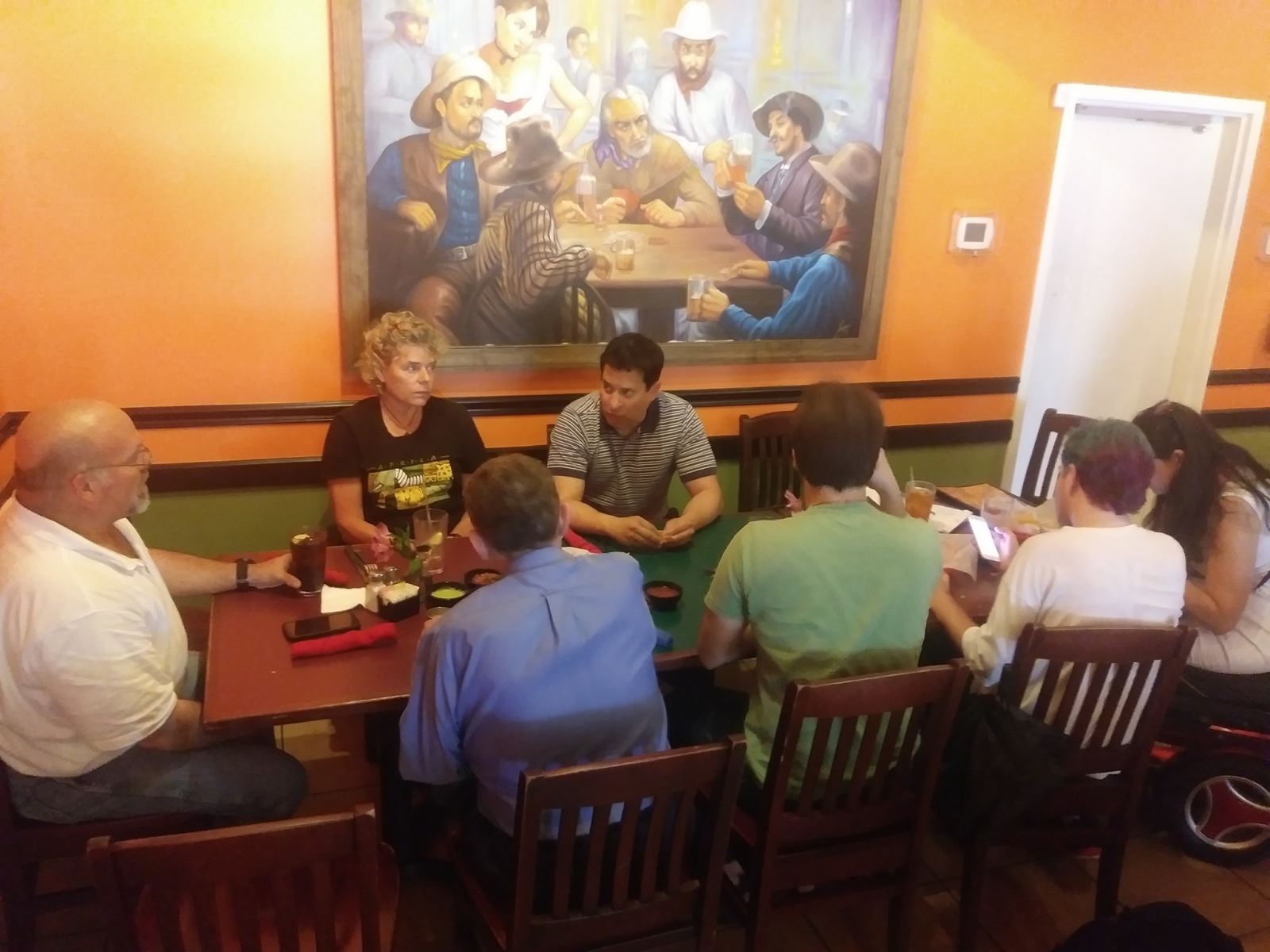 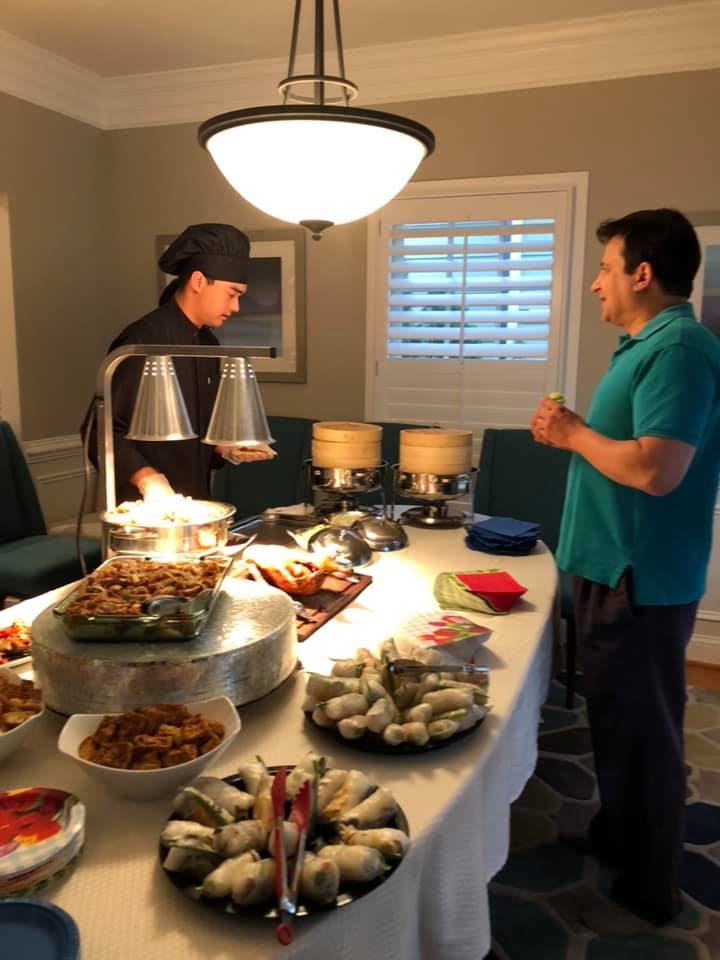 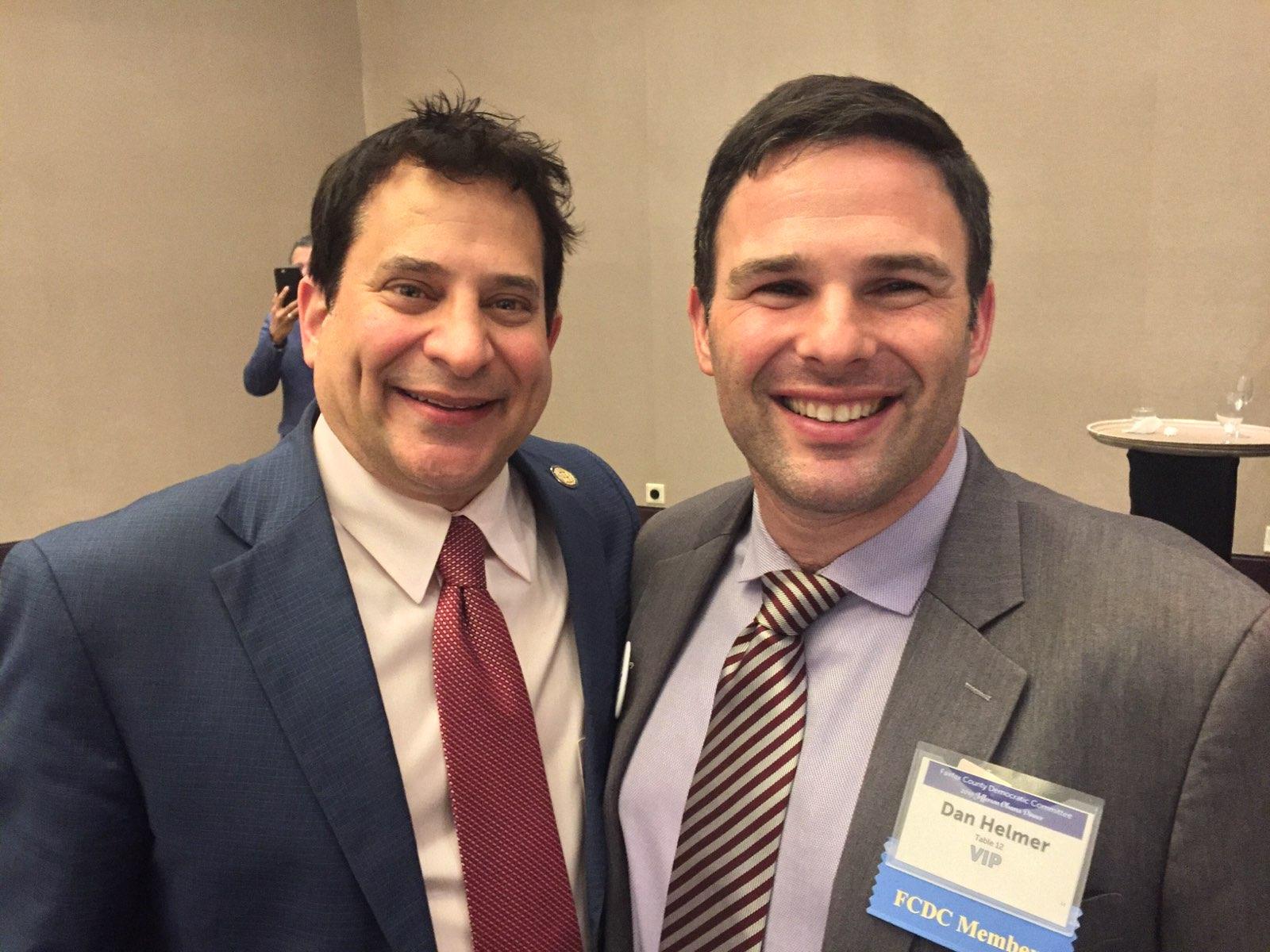 With Dan Helmer, House of Delegates candidate for Western Fairfax and Prince William,
at the Fairfax County Democratic Committee's Jefferson-Obama Dinner.
I've been working to help Dan in his fight to take on Republican Tim Hugo. 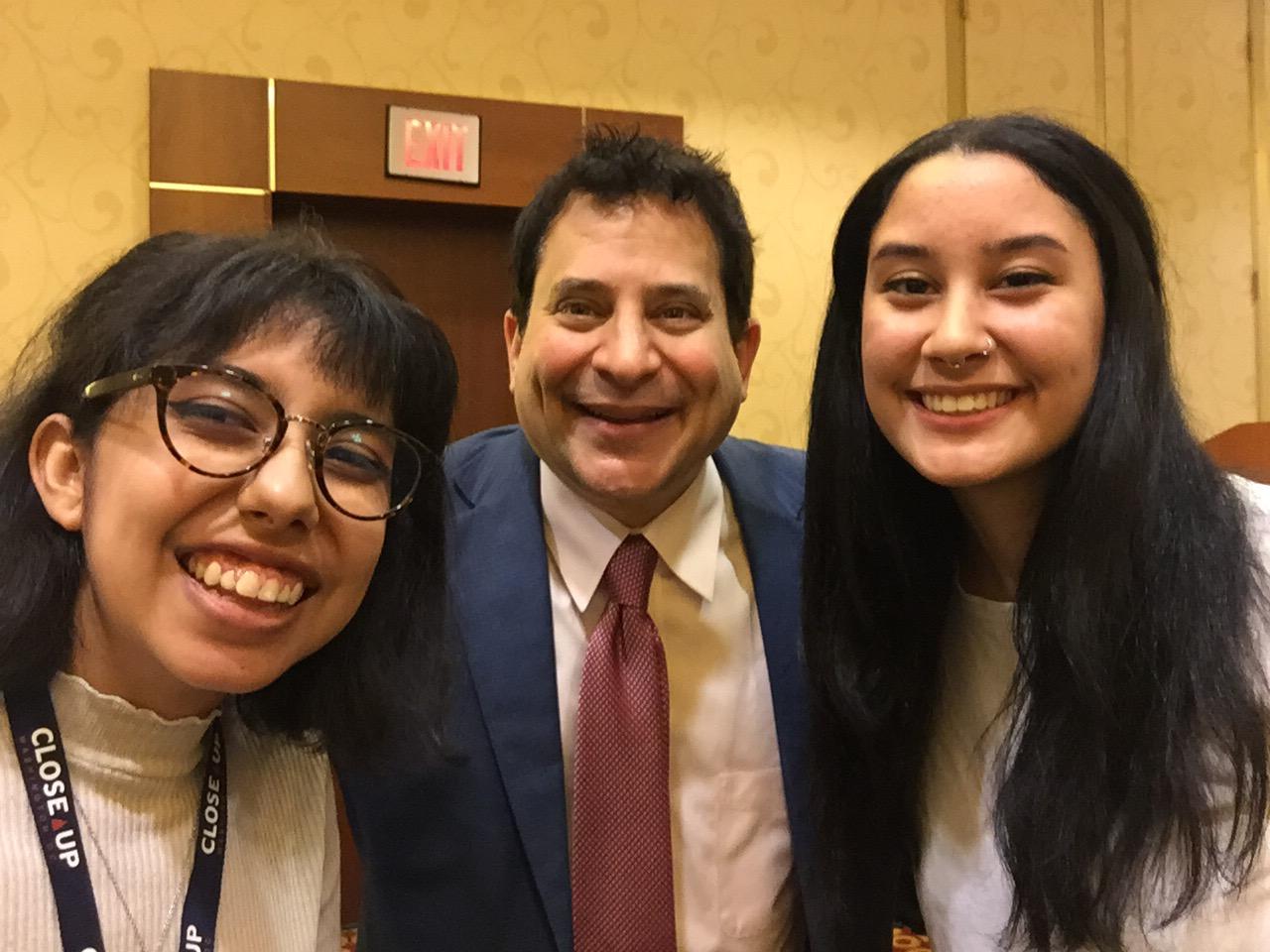 With high school students from Tulsa, Oklahoma after I participated in a liberal-conservative debate for the Close Up Foundation. I have done these debates for 18 years. 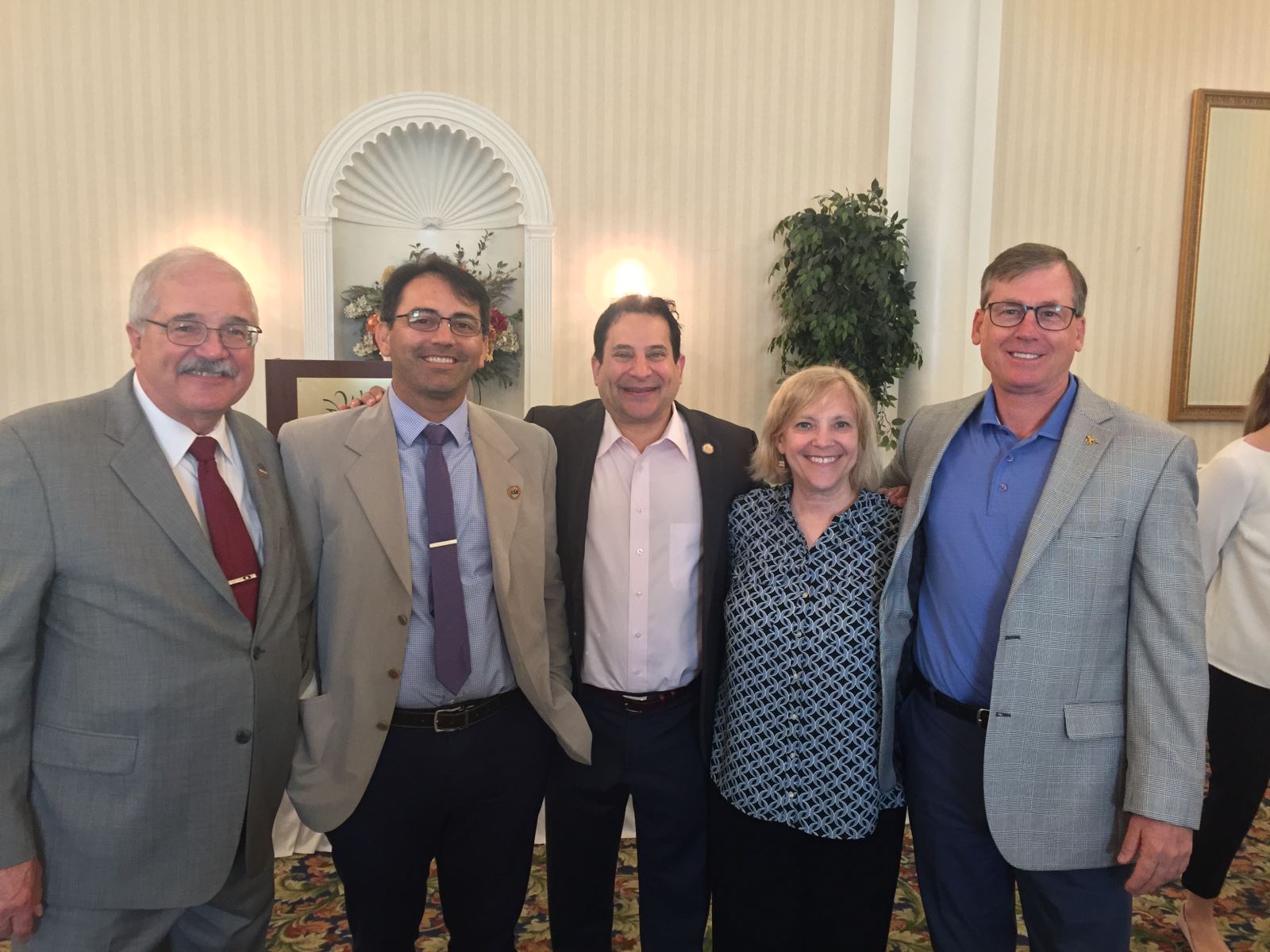 With my friends in Labor at IBEW Local 26's Get Out the Vote Breakfast.
_____
And below you'll find some pictures from my
3rd Annual Rainbow Democrats Extravaganza: 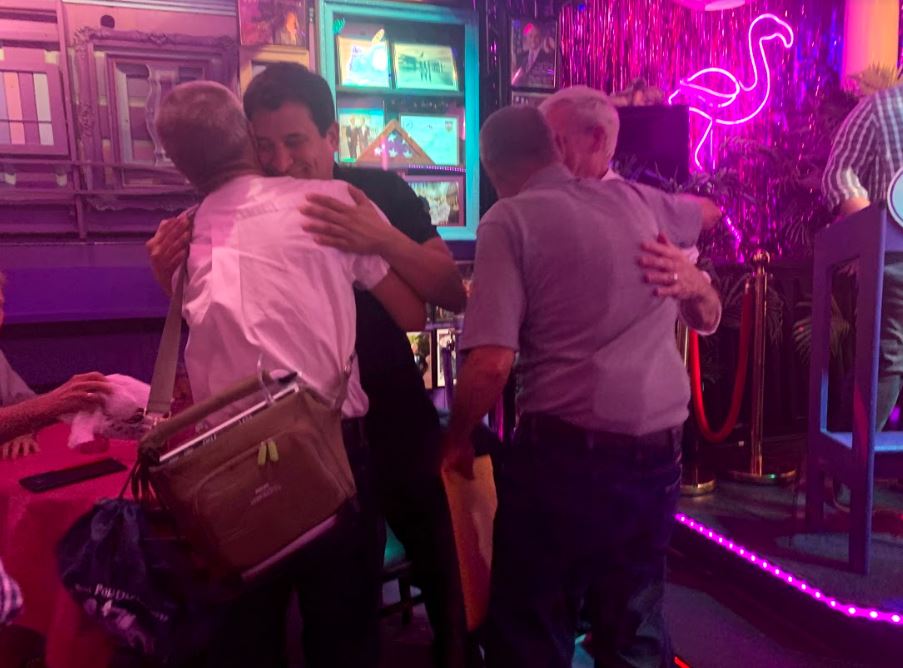 Don Davenport was at the Stonewall Rebellion. He spoke movingly
about how hard life was for the Rainbow Community a half century ago. 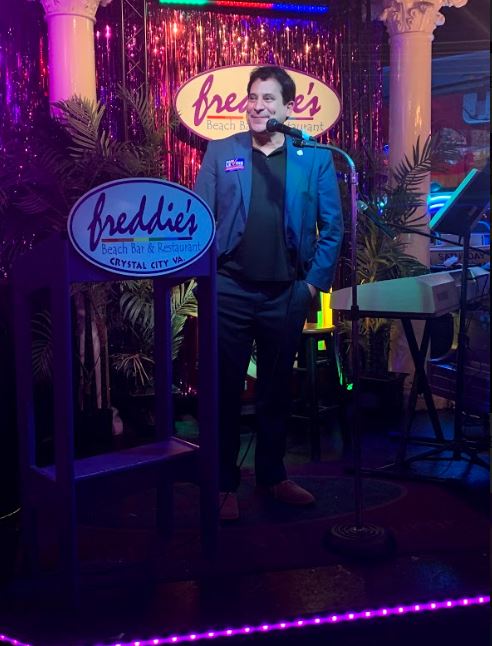 I shared my personal coming-out story. 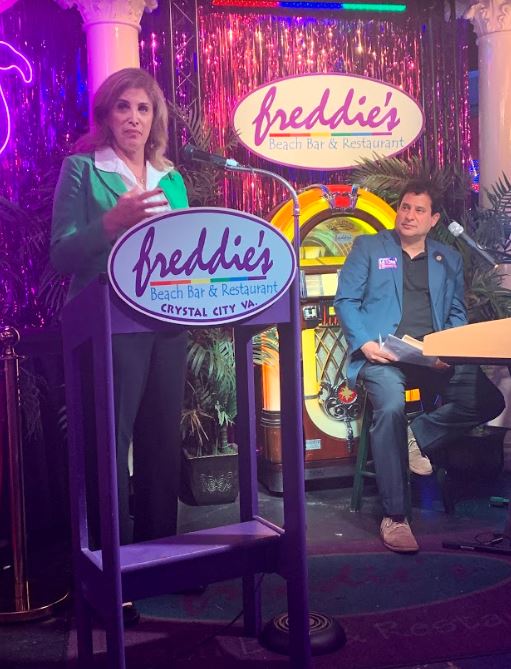 My constituent, former Assistant Deputy Secretary of Defense Amanda Simpson,
is the highest ranking trans person ever to serve in the United States Government. 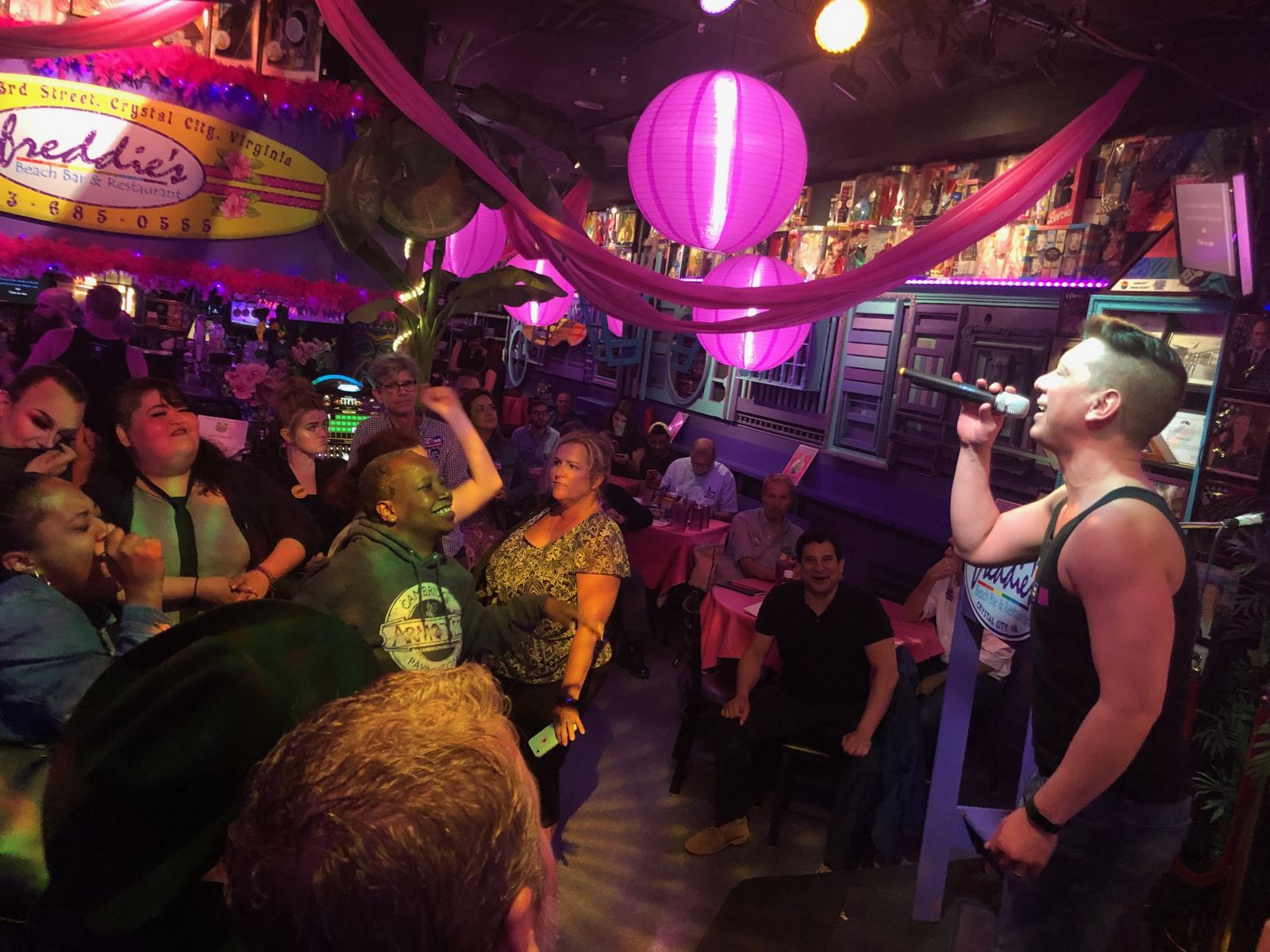 Matt Mullineaux had Freddie's rocking. As did... 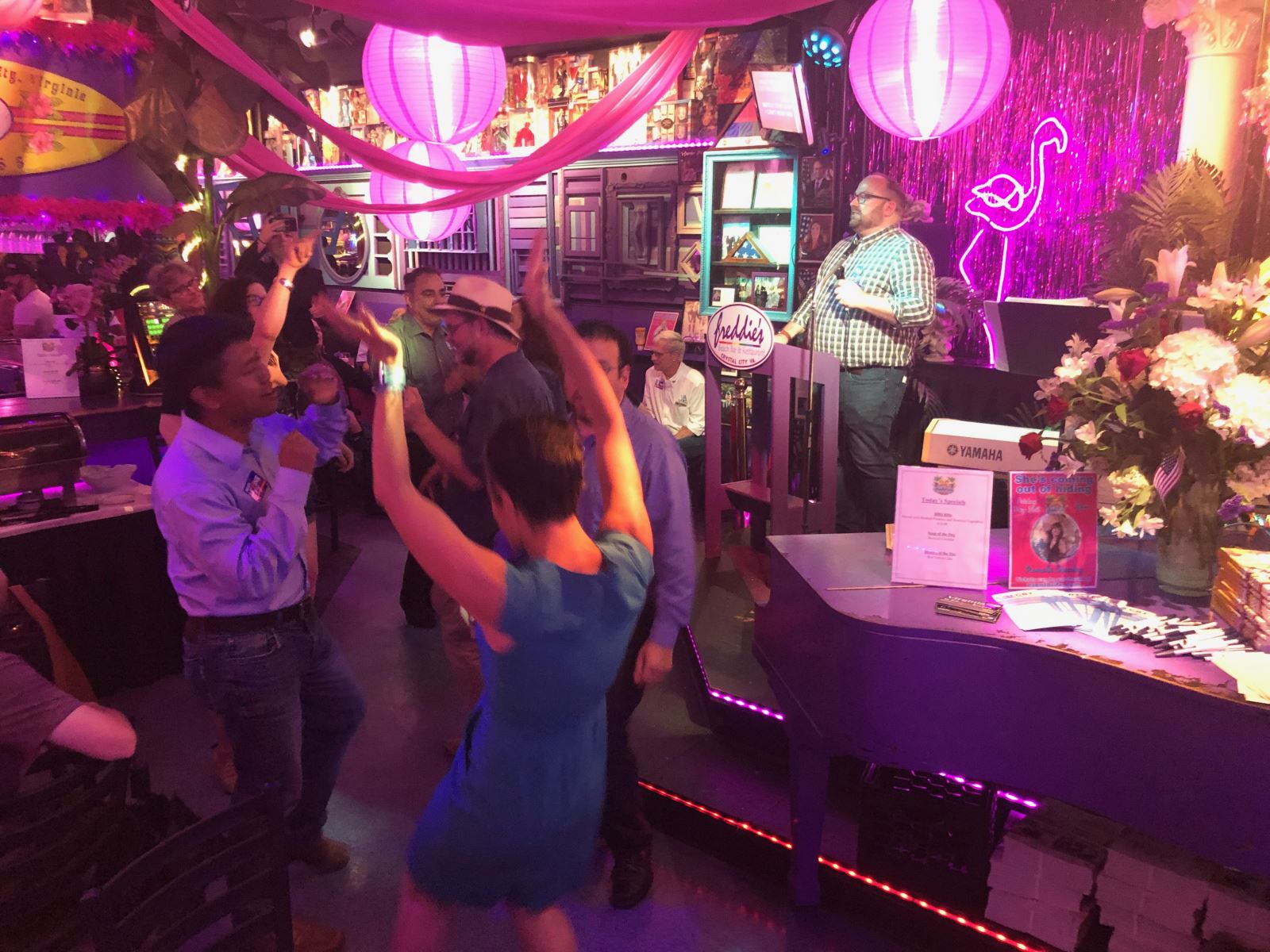 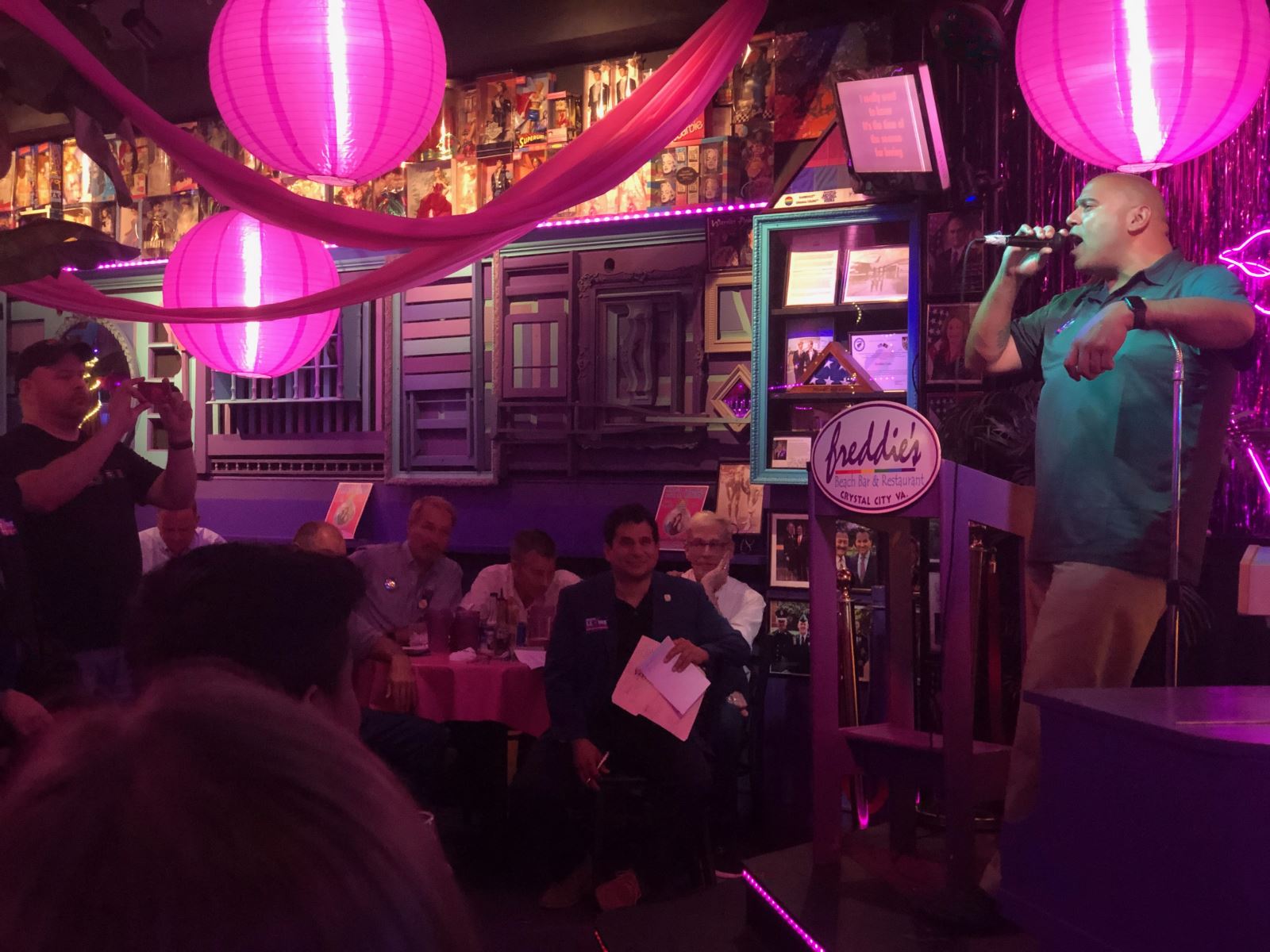 Thursday, June 6
6:00 - 9:00 pm
Blue Alexandria Dinner
The Westin Alexandria Old Town
400 Courthouse Square
Alexandria
Tuesday, June 11
PRIMARY ELECTION DAY
Polls open from 6:00 am - 7:00 pm
As usual, I will be visiting every one of the 23 polling locations
in every one of the 23 precincts
of the 45th District I'm so proud to represent.
I hope to see you there!
SAVE THE DATE!
Saturday, July 13
Fifth Annual Fireworks on the Potomac
My House!
North Old Town, Alexandria