All 55 of us gathered in Richmond to elect the new House leadership.

Last Saturday, all 55 members of the new House Democratic Majority gathered in Richmond to elect the next Speaker of the Virginia House of Delegates.

I am thrilled that we elected my friend Eileen Filler-Corn as Speaker. She is the first woman, and first Jewish Delegate, to hold the position.

We also elected two other members of the Leadership team. My friend, Alexandria's own Charniele Herring, was elected House Majority Leader. She is the first African-American and first woman to hold the position in the state legislature's 400-year history. My Arlington delegation compatriot Rip Sullivan was elected Caucus Chair.

I know all three of these Delegates well. I work well with them and trust them. And I am excited to have them leading the Democratic Caucus as we move Virginia forward. This is the most diverse caucus that there has ever been in the General Assembly's 400-year history. No General Assembly majority has ever looked more like the people of Virginia than the current House Democratic majority.

While Delegates Filler-Corn, Herring, and Sullivan are the House Democrats' leaders, it is you, my constituents, who give me direction.

That's why, the day after our historic House Speaker election,
I reported to you, my bosses, at Mark's Monthly Meetup.

A good crowd--roughly 75 of you--came to Los Tios in Del Ray to give me my marching orders for next year. We talked about a broad range of issues, including ratifying the Equal Rights Amendment, gun violence prevention, fighting climate change, affordable housing, strengthening workers' rights, reproductive rights, reducing healthcare costs, and raising the minimum wage. But we also talked about some less high-profile issues that are nonetheless very important to the people of Virginia such as making voting easier, expanding rural broadband, protecting immigrants, giving localities control over what they do with Confederate memorials, and the Dillon Rule.

One of the biggest topics of discussion was the redistricting reform constitutional amendment that we will likely be voting on this coming session.

As you may know, and as I explained to the crowd on Sunday, I will be voting against the constitutional amendment. This can be a complex issue, but my opposition to the amendment comes down to this: I oppose the amendment because, as drafted, I fear it would make gerrymandering worse in Virginia. The current Constitutional Amendment relies on the Virginia Supreme Court -- appointed by the illegally-racially-gerrymandered former Republican majority -- to draw our new district lines.

Simply put, I don't trust them.

I described some of my concerns with the measure in my annual end-of-session letter, available here, but as I believe in transparency, I encourage any constituents to email me or otherwise contact me directly (see "Contact Mark" in left-hand column) to learn more about my stance on the redistricting amendment, I also encourage you to attend one of two upcoming public forums where I will be discussing the redistricting amendment.

Come here me speak on Redistricting

This Sunday's League of Women Voters event will feature brief presentations on redistricting by numerous members of the General Assembly, so it should be a good way to learn where a number of us stand on the issue. However, it is not necessarily the best venue for an in-depth, back-and-forth discussion about the merits of the amendment.

That's why I also encourage you to attend a debate I'll be having with Brian Cannon, Executive Director of OneVirginia2021, on December 11, during which we will have an in-depth discussion of the pros and cons of the constitutional amendment and whether or not appointees of the former illegally-gerrymandered Republican-majority legislature should draw the lines in Virginia for the next decade and possibly decades more.

I say no. I think there's a better way.

My friend and fellow member of the Arlington delegation in the House of Delegates Delegate Patrick Hope will moderate the conversation between Brian Cannon and me, and we will be taking questions from the audience.

The scene outside the Capitol during the July 9 Special Session on Gun Violence
that House Republicans adjourned after just 90 minutes.

Late last week, Republicans in the General Assembly canceled a planned hearing of the Virginia State Crime Commission on gun safety that was scheduled for this week. You'll recall that, after refusing to vote on any gun safety bills at the Governor's Special Session called for that purpose in July, Republicans in a less than 30-second meeting of the Militia, Police, and Public Safety Committee (on which I sit) referred them all en bloc to be studied by the Crime Commission. After making sure they would get paid for the session, they adjourned it. The entire session lasted less than 90 minutes.

When I presented my bill to ban assault weapons, bump stocks, high-capacity magazines and other things that have no business being on our streets to the State Crime Commission, I called the Republicans out for holding a sham hearing.

As you can see in the video below, they weren't too happy about that.

Click image above to watch my 3-minute remarks before the Crime Commission.

As soon as I started pointing out the process was a sham, the Republican Chair of the Committee admonished me that "staff is going to undertake an exhaustive review of the concepts, the issues, and the solutions." Delegate (soon to be former Delegate) Tim Hugo then immediately called for the ayes and nays seconds into my presentation.

I persisted. I pointed out that if a single Republican had any interest in any gun violence prevention effort, we could get a bill passed by Labor Day. Senate Majority Leader (soon to be former Majority Leader) Tommy Norment raised a "point of order." He said "the purpose" of the hearing was so "that staff may have an introduction and undertake a more detailed study to determine the recommendations, not to argue the politics."

Did staff undergo an "exhaustive review" and a "detailed study"? Nope. The study is three pages long and makes no policy recommendations. This is not the fault of the crime commission staff. They were ordered to not to make policy recommendations by the GOP majority. The ridiculously short "report" can be found by clicking here.

The Republicans (who are still in control until January) then canceled the November continuation of the July Special Session. They did exactly what I said they would do: nothing. And although they were incensed that I said it, it turned out to be a 100% accurate description of the situation.

And, come January, we will.

Every two years, the Democratic Party of Virginia requires a reorganization of every local party Committee in the Commonwealth of Virginia, and 2019 is that year for the Alexandria Democratic Committee (ADC).

At its October meeting, the ADC voted on and passed our Call to Caucus to comply with the reorganization. If you missed it, you can read about it here. Here’s what will happen.

Complete your new Membership of Associate form and return it to the ADC office, either online or via mail.

You can complete your Member or Associate form online at:
https://www.alexdems.org/membership

Note that Full ADC Members are required to be registered to vote in the City of Alexandria and attend monthly meetings, which usually occur the first Monday of the Month at Minnie Howard School (3801 W. Braddock Road). If you know you are unable to attend meetings, please use the Associate form; you can change later on if circumstances change.

You can also snail mail your paper application to:

Or email it to: office@alexdems.org

Here are the paper application forms for both Member and Associate.

This request may be made via snail mail or via email to office@alexdems.org

There is a FIRM DEADLINE of November 25, 5 PM to submit your application and payment. The Vice Chair of Finance is personally requesting that you submit as soon as possible so that there is adequate time to process all of the paperwork. If you miss the deadline, you will not have an opportunity to join until the January 6, 2020 meeting where you will need to do the usual two-step membership process. You will also miss the opportunity to vote for officers.

Thank you to the 120+ people who have already submitted their applications.

If you have questions about the process, please send them to office@alexdems.org 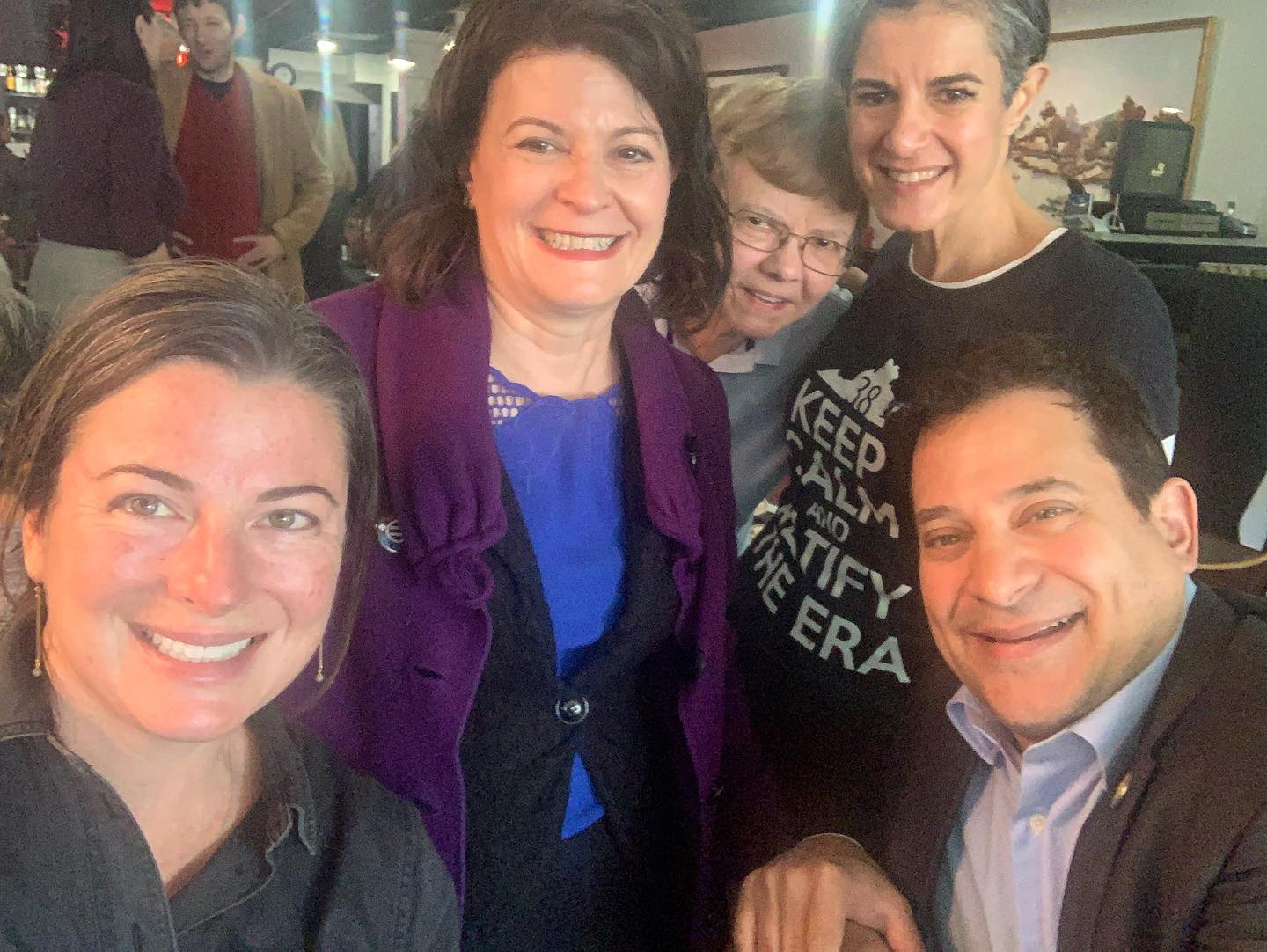 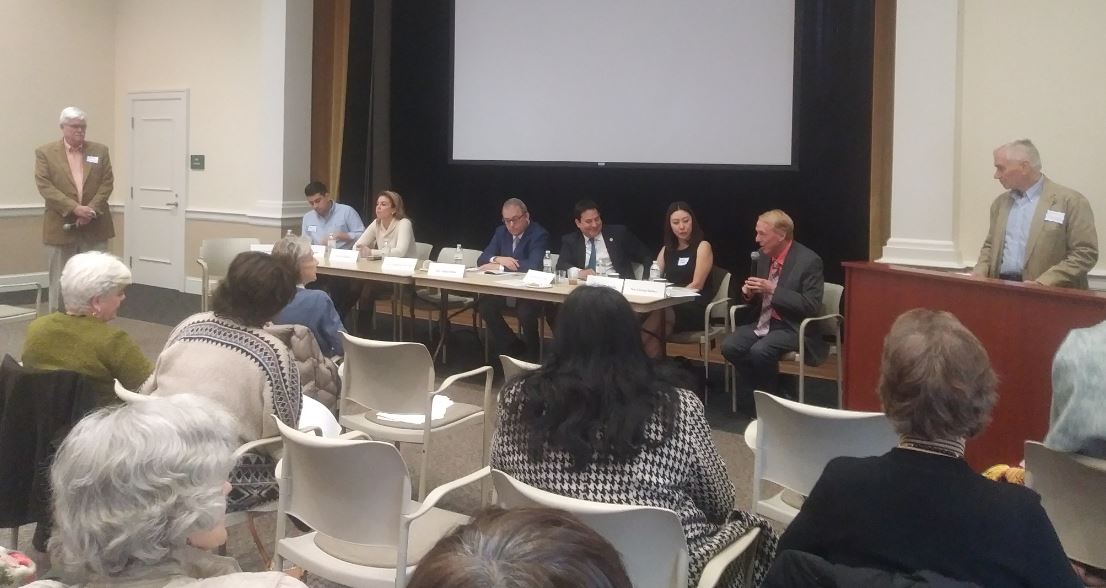 At the Legislative Forum on Aging Issues,
hosted by the Commissions on Aging of Alexandria and Arlington. 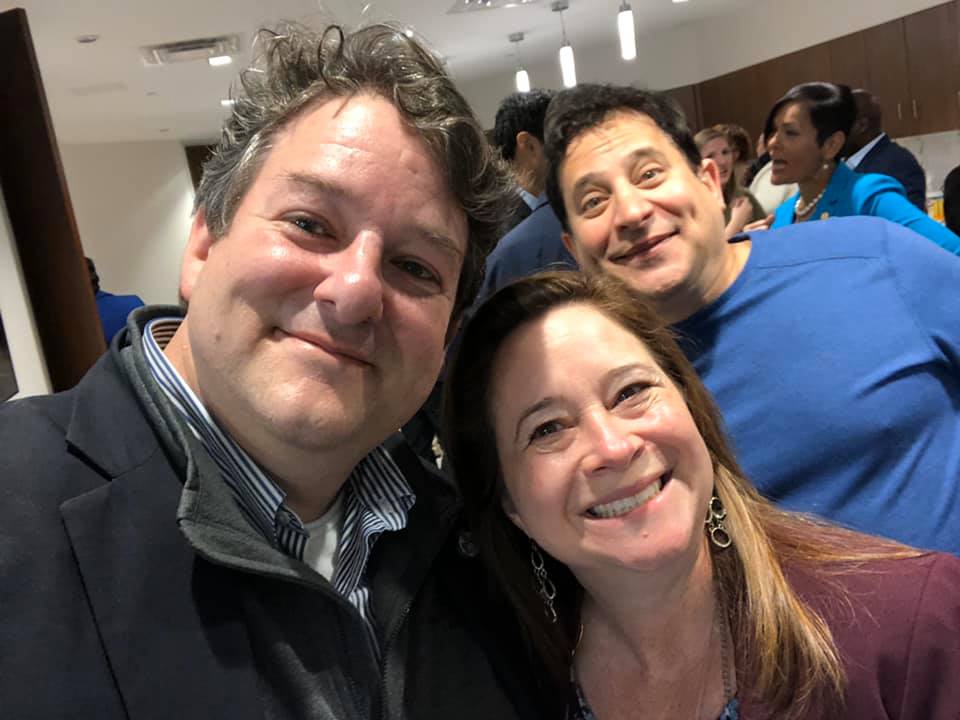 With Delegate Alfonso Lopez and Delegate-elect Shelly Simonds
in Richmond at the House Leadership elections.