By now, you know the Virginia Democratic Party strongly urges you vote No on 1: 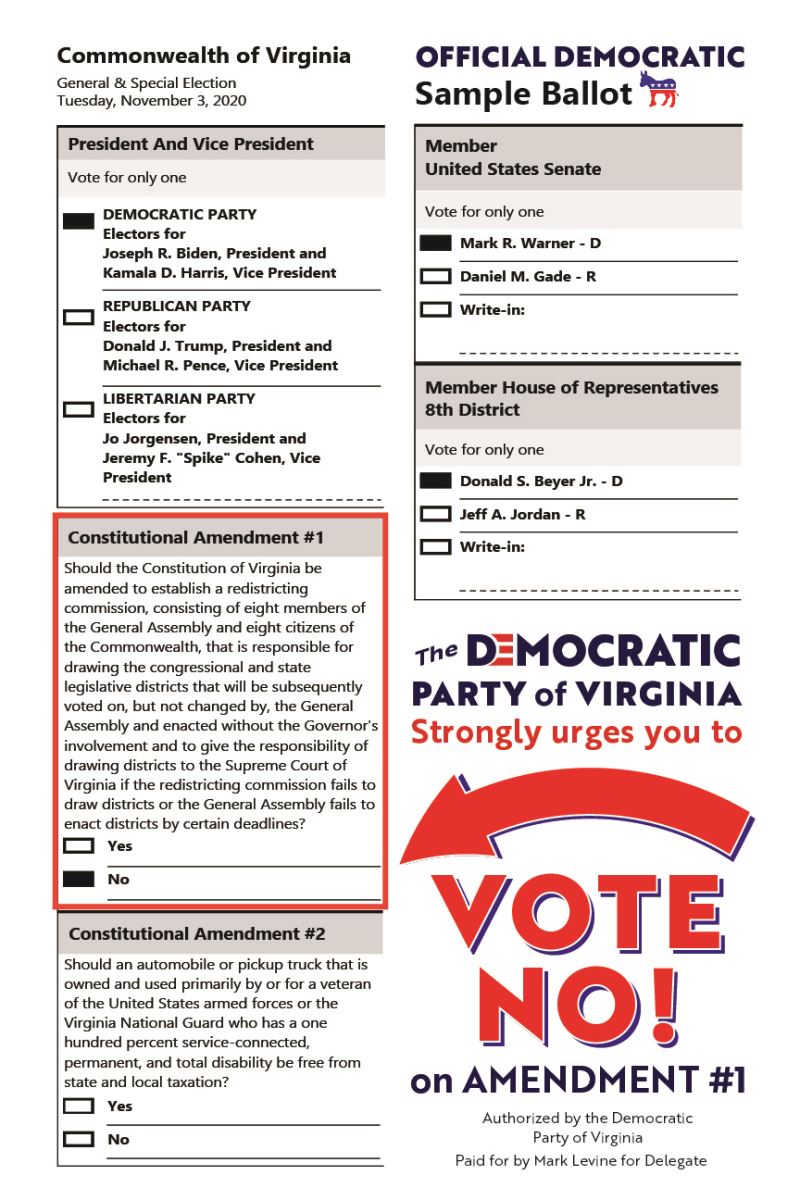 Did you know that Virginia organizations focused on on racial justice urge you to vote NO as well?

Read what Jamaa Bickley-King, the co-founder, president, and chairman of the board of New Virginia Majority has said:

Proposed redistricting amendment leaves some out.

Read what the Virginia State Conference of the NAACP wrote: 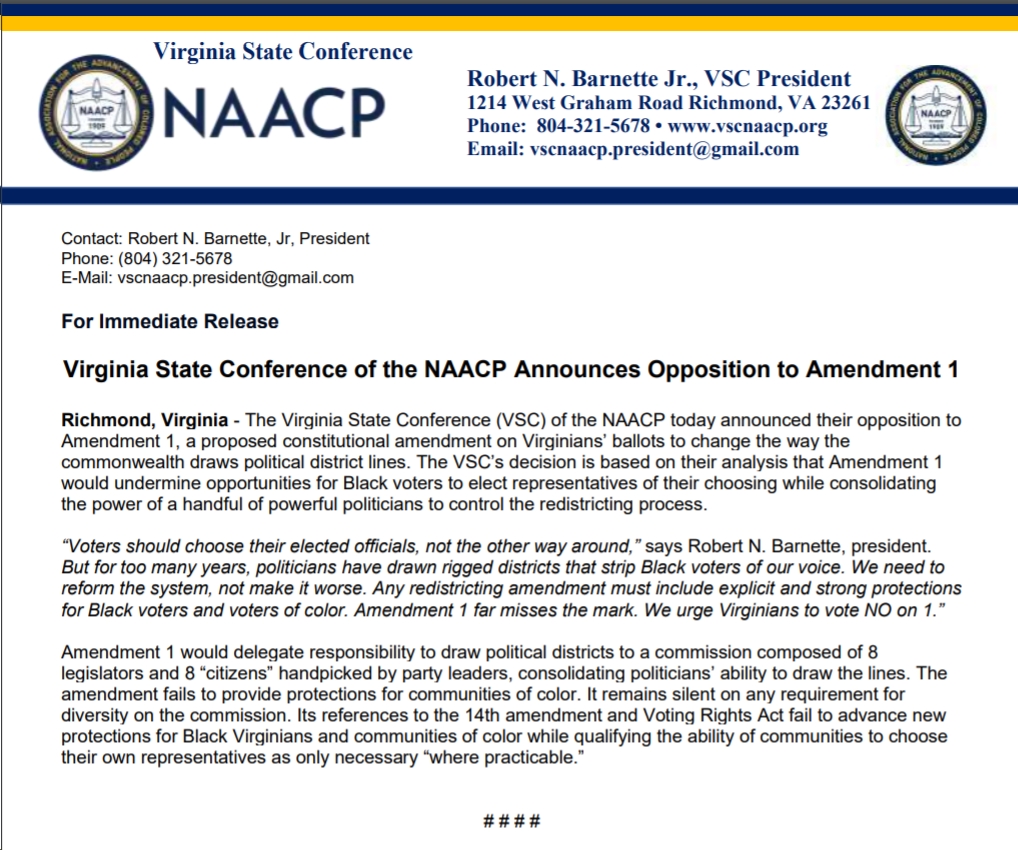 Other groups in the NO ON 1 camp include, but certainly aren't limited to:

And the following decided (with 80-90% of their members voting NO):

(The Alexandria Democratic Committee hasn't met since March due to COVID.) 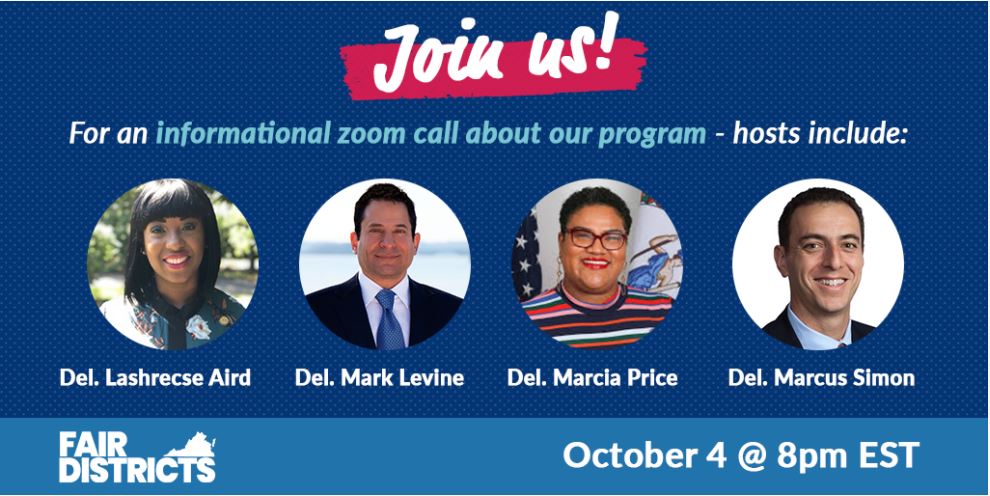 Learn why you should vote NO on Amendment 1 and how to get involved in the fight to defeat the pro-gerrymandering amendment. Fair Districts will have many informational sessions in the coming days, and one is tonight. RSVP here.

We hosted a conversation on Tuesday night. You can watch that by clicking here.

I am also happy to host my own individual conversation/Question & Answer session on Zoom. Please let me know if you would like one and when you will be available to come. I'll try to schedule them at a convenient time for folks.

What if you're still unsure?

No doubt Amendment 1 is convoluted and complicated. It was designed to be. When those who want to gerrymander Virginia are deceptively couching such an effort as "reform", things get pretty complicated.

But here are the basics:

2) Amendment 1 keeps legislators drawing their districts. Every so-called "citizen" on the commission set up by the amendment will be handpicked by party leaders. Want to apply yourself?  Sorry, you can't. Unless you're the spouse, child, family member, close friend, or business associate of one of the four party leaders, you won't be able to have any role in drawing Virginia's district lines. This is a commission consisting of four party leaders and the twelve people they pick to serve with them. Actually, it will be done by an even smaller group than ordinary gerrymandering. And legislators will have great difficulty bucking their party leaders who draw their districts.

3) Amendment 1 reserves no seat at the table for Black Virginians or any other racial, ethnic, geographic, or language minorities. There's no seat for communities of color, no geographic diversity, really no requirements at all other than knowing the party leaders. Also, independents and third parties are expressly and permanently excluded from ever having a role in redistricting. This makes it very easy for party leaders to make sure there are no independent voices in the Virginia General Assembly, either within or outside the established political parties.

4) Amendment 1 allows Republicans -- and Republicans alone --  to draw all the districts through its "poison pill" feature. Even if 14 out of the 16 commission members support a map, any two Senators or two Delegates can unilaterally scrap the commission. (This could be, for example, the two chosen by the chair of the Republican Party.) If that happens, there is no requirement of transparency, and all the districts would be drawn by the Supreme Court of Virginia with no restrictions on partisan political gerrymandering. The Supreme Court of Virginia has a 6-1 partisan Republican majority and consists, for example, of Ken Cuccinelli's right-hand man, a former Republican Delegate/Senator, the sister of a sitting right-wing Republican Senator. All of them would be allowed by Amendment 1 to favor Republicans. That's why Republicans see Amendment 1 as the key to their permanent takeover of Virginia's legislature, even when they don't win the majority of the votes. As the members of the Virginia Supreme Court are appointed to staggered 12-year terms by the Virginia General Assembly, Amendment 1 allows these conservative jurists to design the very legislature that ensures their reappointment forever.

6) Once Amendment 1 is in the Constitution, it's virtually impossible to remove. Amending the Virginia Constitution requires:

If Republicans use Amendment 1 to re-gerrymander Virginia back in their favor in 2021, Democrats will not have power to amend it again. Republicans could then lock themselves into permanent gerrymandered power the way they have in Wisconsin, Florida, Michigan, Ohio, North Carolina, etc.  But they would have an advantage in Virginia. Because, unlike those other states, the Virginia Legislature appoints the Virginia Supreme Court -- and because Amendment excludes the Governor from having any role -- this would be a permanent revolving door of court appoints legislature appoints court appoints legislature. And voters could never stop it, unless we got a massive supermajority (60%? 65%?) to defeat the statewide partisan political gerrymander.

I'm not willing to take that risk. Are you?

So what's the alternative?

1) In the 2020 Session, with a couple months of taking control Democrats in the Virginia General Assembly passed a new law (HB1255) that, if Amendment 1 fails, explicitly bans partisan political gerrymandering in Virginia. It also includes explicit protections for Virginia's racial, ethnic, and language minorities. It requires districts to be compact, contiguous, and to protect communities of interest. This ban on gerrymandering is already the law in Virginia and will remain in place if the Amendment fails. Unfortunately, if Amendment 1 succeeds, its provisions which allow partisan political gerrymandering take precedence because the Constitution trumps the law.

2) We can pass a nonpartisan independent citizens-only commission in 2021 in time for the 2021 redistricting. We have the votes to do it but only if Amendment 1 fails. Republicans currently support Amendment 1 because it puts the thumb on their scale. But if it fails, I'm confident they will come around to support a nonpartisan independent citizens-only commission, if only to avoid the Democratic majority from drawing the lines. (Of course, we still couldn't gerrymander due to HB1255.)

Can we beat this?

Despite the fact that our NO side is outspent 10 to 1, the amendment only has a 48% approval rating in the latest poll, down 24 points from 72% in January. Clearly, the more people know about the Amendment the more they are likely to oppose it.

We can beat this! But we need your help!

We need you to join the fight to make sure we don't enshrine gerrymandering in the Constitution.

While I will ask for finances to support the effort in a bit, your most effective way to help is your own grass-roots effort.

Send it to every Virginia voter you know. The message is clear:

And most importantly, we need your help at the polls!

As a former Precinct Captain, I've been handing out Democratic Sample Ballots for almost 20 years now. You smile and folks take the ballot, but unless there's a local election with unfamiliar names, 99% of the voters already know who they're voting for.

Not this time. We've found that 70%+ of the voters at the polls do not even realize Amendment 1 is on the ballot!  That's where you come in. When you explain why Amendment 1 is bad for Virginia, you'll find you convince 80% of the people or so who ask. Once folks get it, they vote no. In a two-hour period, you personally can change 50-100 voters minds just yourself. That's power at the polls!

State efforts are organized by FairDistrictsVA.com

Local efforts are all being organized by the good folks at No on 1 Alexandria, No on 1 Arlington, and No on 1 Fairfax.

I encourage all Alexandrians who care about stopping gerrymandering to volunteer with No on 1 Alexandria and donate to my campaign to support their work today. Below is Boyd Walker, longtime Alexandria resident and activist, outside the early voting location on Royal Street, right across from City Hall. 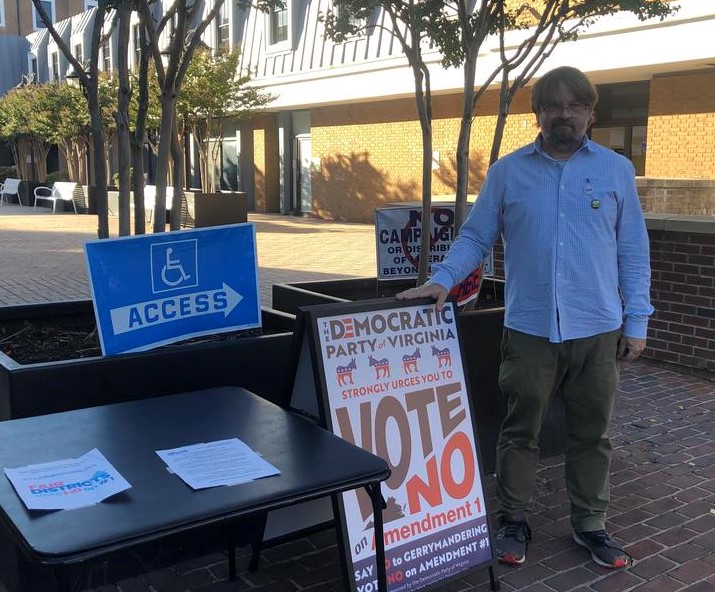 Boyd Walker, with a snazzy "Democratic Party says Vote No on 1" sign

If you've voted early in-person in Alexandria already, you may have seen Boyd, or Helen, or Alex, or Eleanor out front, talking to voters about why everyone committed to ending gerrymandering needs to Vote No on 1.

They have been having conversations with folks as they enter the polls, and they have been remarkably successful. And that's no surprise. The more people learn about the amendment, the more people oppose it. That's why a recent poll from the Wason Center for Public Policy at Christopher Newport University showed support for the Amendment cratering below 50% for the first time, to 48%.

What if I live in Arlington or Fairfax?

We definitely need your help!

How about Loudoun?  Prince William? Other parts of Virginia?

You can sign up to volunteer with FairDistrictsVA.com or your local Democratic Party.

If you've asked to volunteer and haven't heard back in a day or two, email me personally.

If You Help Us Defeat Amendment 1,
Your Money Goes a Long Way 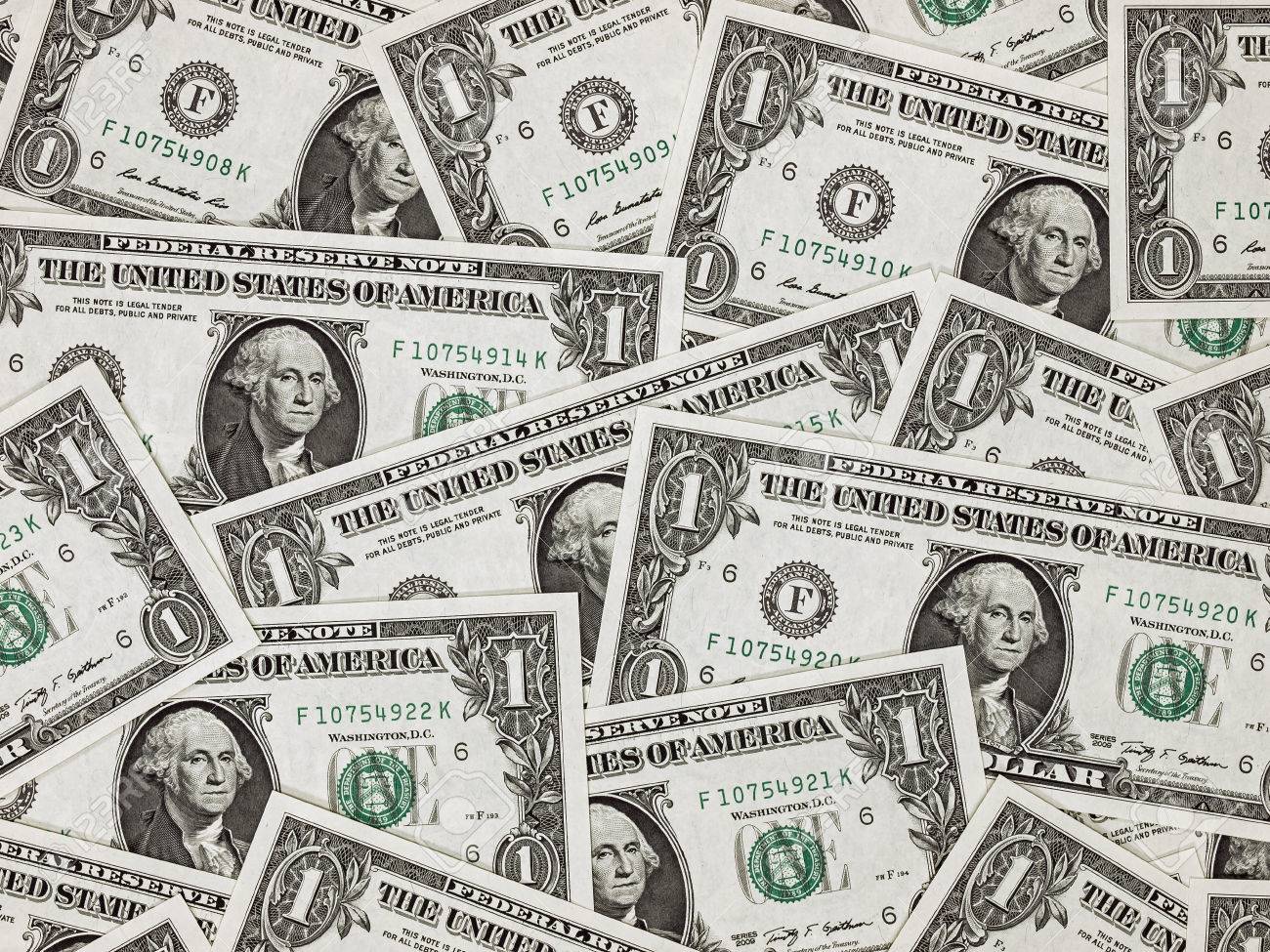 It's funny how political money works.
Donate $100,000 to Joe Biden's campaign, and it's a drop in the bucket in a multi-billion dollar effort.
Donate $10,000 to a Senatorial campaign, and it's helpful but small potatoes in a multi-million dollar effort.
Donate $1000 to No on 1, and it's a major infusion.
Even as little as $154 finances signs at the polls like the one below (which costs $40 for printing each side and $74 for the frame. it's in.)

In sum, every little bit helps!

Our opponents have milions, including $50,000 just this week
from big money, out-of-state right wing groups.

They're out-spending us 10 to 1.
Every dollar you send me today, I will give to local No on 1 campaigns.
Or you can donate directly to No on 1 efforts throughout Virginia.
Donate to Fair Districts VA to support our work reaching out to voters across the Commonwealth
about the dangers Amendment 1 poses to free and fair elections in Virginia.

Help us to defeat Amendment 1 today: 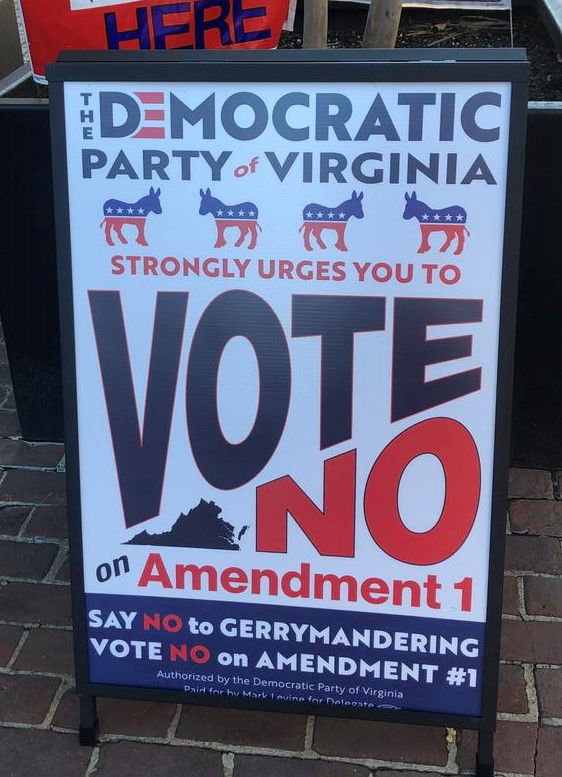 Donate to my campaign today to help pay for literature and put signs like this outside of polling places.

This sign was authorized by the Democratic Party of Virginia, but we must raise funds to put them out.

Learn why you should vote NO on Amendment 1 and how to get involved in the fight to defeat the pro-gerrymandering amendment. RSVP here.

We hosted a conversation on Tuesday night. You can watch that by clicking here.