Jefferson Davis Highway to be renamed in Arlington
(I speak in the telecast.)
FOX 5 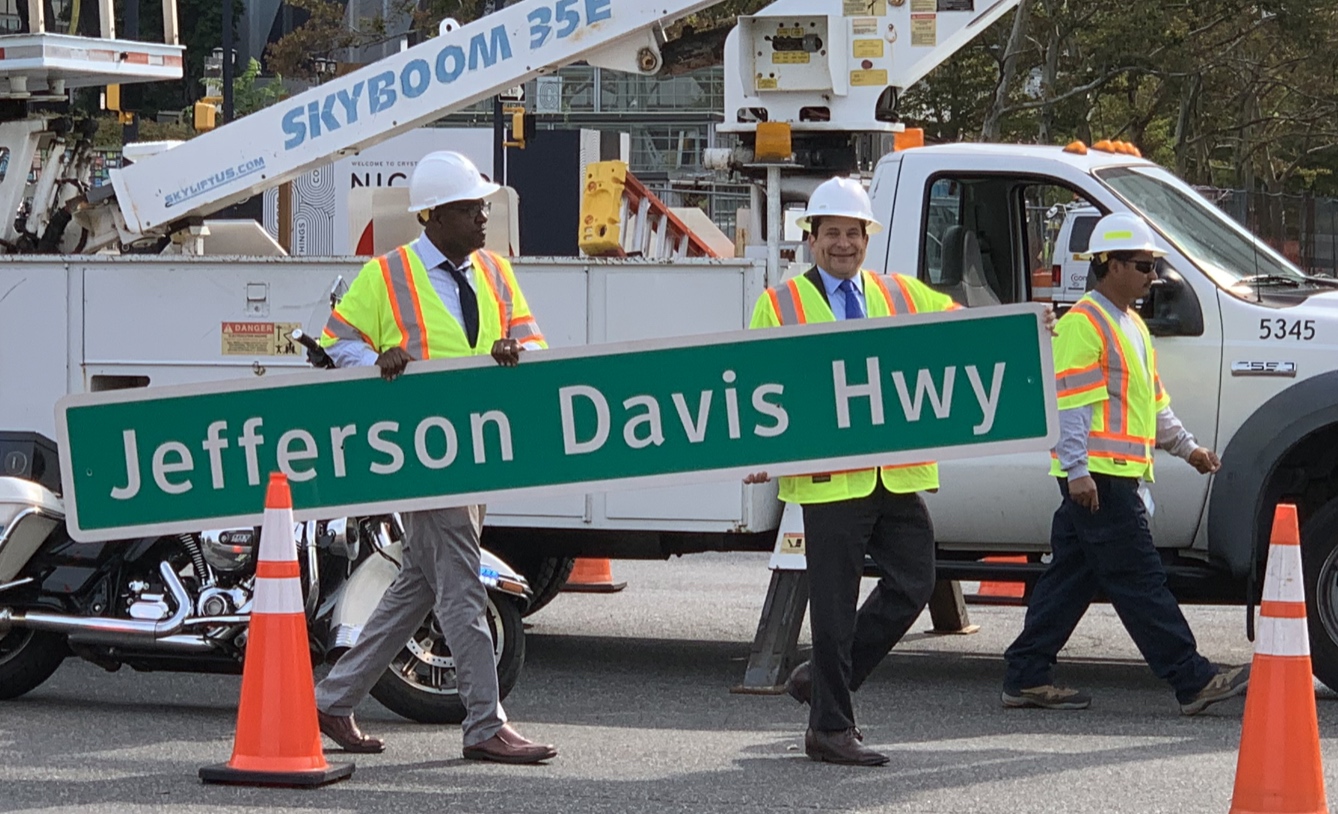 Thursday morning, Arlington County employees Jacque Hull and Terrance Funchess (pictured below) rose above Route One on a crane, and took down the street sign bearing "Jefferson Davis Highway." They replaced it with "Richmond Highway," its former name, a very ordinary name that is identical to its name in Alexandria and Fairfax and one no longer offensive to Arlington values.

I mention Terrance and Jacque because the sign change was a good reminder that, as important as it is for elected officials to advocate for the values of the communities they represent, it is our public employees who truly put those values into action. 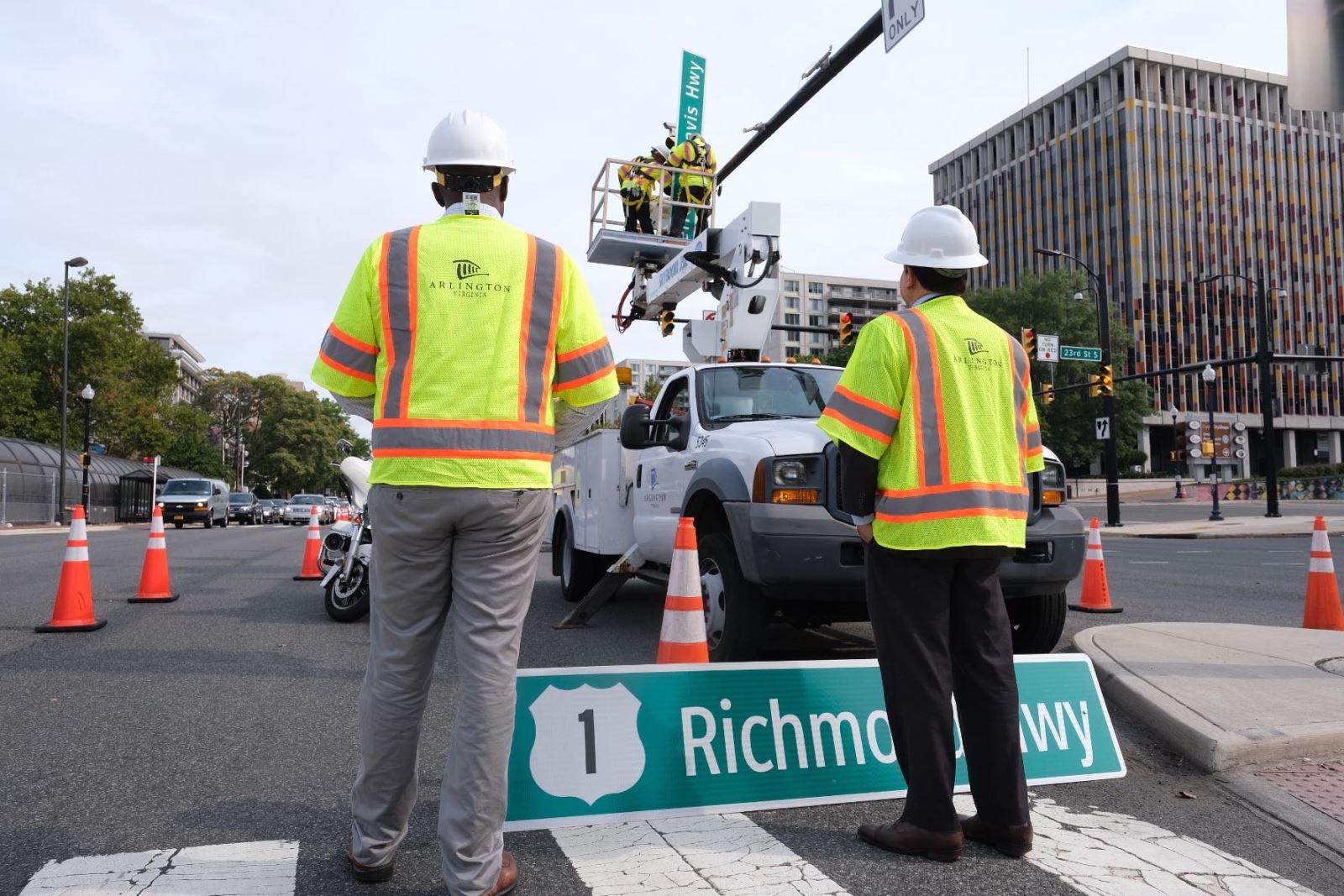 Arlington County Board Chair Christian Dorsey and I watch as Arlington employees Terrance Funchess and Jacque Hull take down the Jefferson Davis Highway sign above Route One.

Over the weekend, Arlington employees worked deep into the night so as to minimize traffic disruptions. As of today, all Jefferson Davis Highway signs should be down and replaced by Richmond Highway all along Route One in Arlington.

Read more about how we got to this momentous occasion here.

After the sign installation, I spoke briefly about the racist motivations behind the Virginia General Assembly renaming the highway in 1922 after the Mississippi traitor who led the Confederacy and the importance of having Route One's name reflect the values of our community through which it winds.

You can watch my speech by clicking here or the image below. 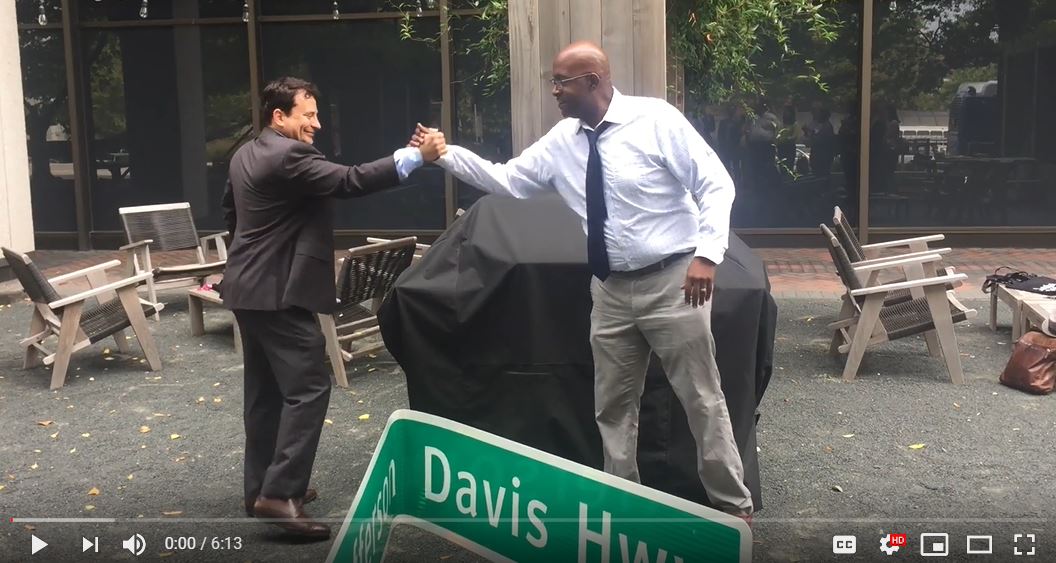 Click image above to watch my speech on the significance of ridding Arlington of Jeff Davis Hwy.

Again, I want to personally thank Attorney General Mark Herring for reviewing and then adopting my legal argument that Virginia legislative approval was unnecessary to make the change.

Again, I want to thank the Arlington County Board and the Commonwealth Transportation Board for unanimously requesting and approving the change.

This Friday, Help Flip the House with
Senator Mark Warner and Me 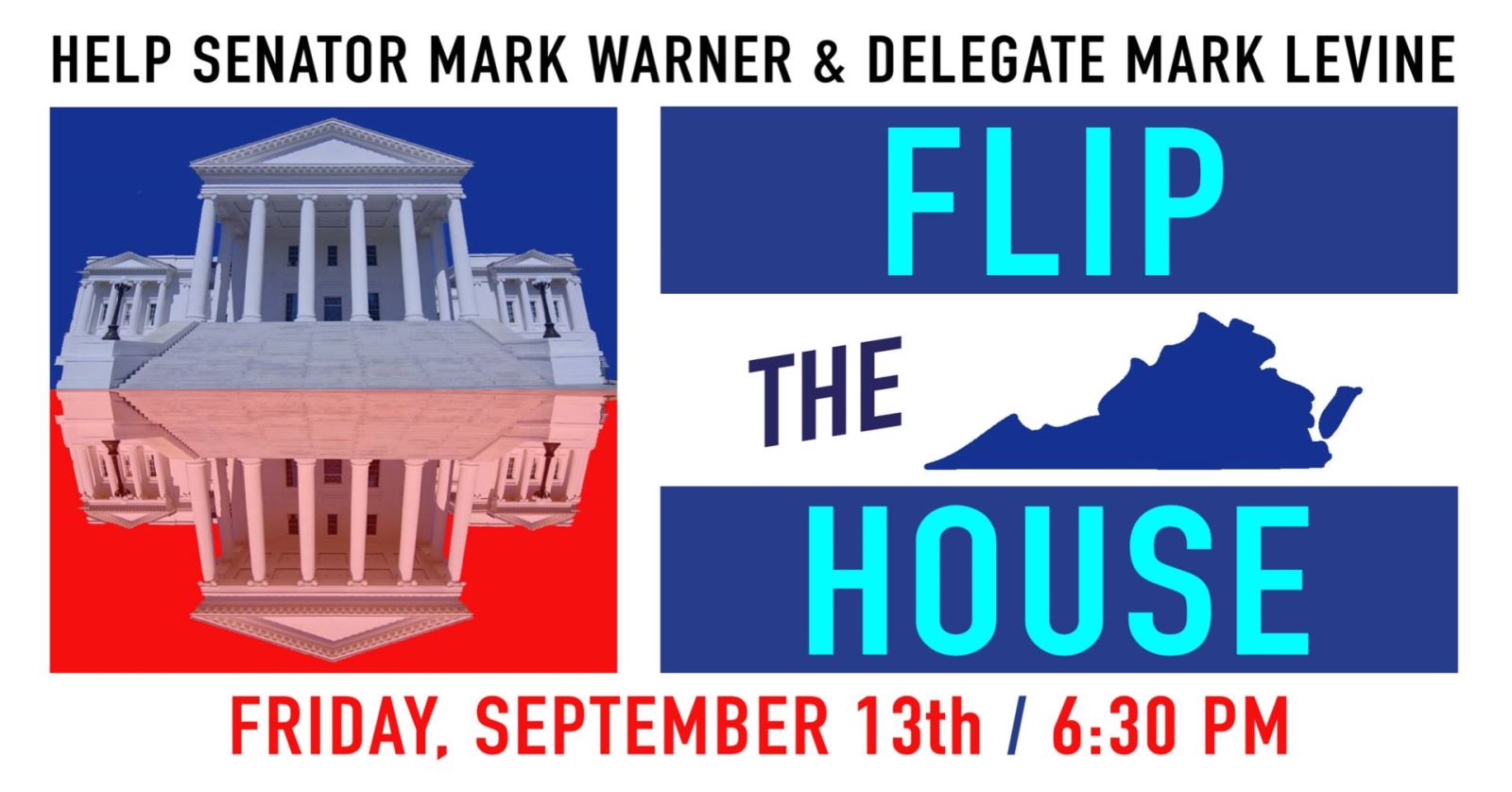 The future of Virginia is in your hands.
Think how you'll feel if you wake up on Wednesday, November 6th, the day after Election Day on Tuesday, November 5, and there's another drawing from a bowl as happened to Shelly Simonds two years ago for control of the House of Delegates.
Think how you'll feel if you know that you could have made a difference — either by canvassing or contributing — but you decided to let others do the work instead. And we came up just short...
Think how you'll feel if Republicans remain in control of the Virginia House of Delegates, so that even if Democrats flip the Senate, we go nowhere on gun-safety legislation, nowhere on the Equal Rights Amendment, nowhere on reducing the cost of health care or raising the minimum wage, nowhere on climate change, nowhere on criminal justice reform, nowhere on improving roads and education. Nowhere.
Now think how you'll feel if you stepped up to the plate, worked as hard as you could, and contributed as much as you could. Will tears stream down your face as you watch a bunch of newly elected Democrats join with us old-timers (that's right, I'm an old-timer now!) to make up the first progressive majority in the 400-year history of the Virginia House of Delegates?
If you're like me, you'll be crying either way on Election Night.
Wouldn't you prefer they be tears of joy?
Many of you are already working very, very hard and contributing your soul and your treasure to the flip. So why donate to Mark Levine for Delegate, a guy whom you may like but who's running uncontested? Why not give to other Virginia candidates? 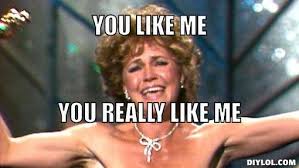 If you think I'm doing a good job as your Delegate, then giving through me helps me with my Caucus. It helps me make the case, through your contributions, that I should play an important leadership role. For example, I might want to be chair of the committee or subcommittee that handles gun-safety legislation. And if I raise a lot of money for caucus, I am more likely to make that happen.
2) More importantly, I give the money away.
I forward your contributions after expenses (hint: no credit-card expenses if you pay by check) to the Virginia House Democratic Caucus or, if you prefer, to any Virginia House candidate you specify.
Why go through me to the Caucus? Well, because we are in the best position to know— as push comes to shove — whom to actually give the money to. We do private polls up until right before the election. If a Democratic candidate is doing very well, she may not need our help. We don't need to waste money on those doing very well.
"I'll be damned if I'm going to pay for a landslide."
— reported wire to John F. Kennedy
from his father who was financing his campaign.
Conversely, if a beloved candidate is way behind and unable to break 40% in a solid red district, we may still love him, but we shouldn't finance him too much. We need to save our limited funds for someone like:

We need to take those 40-50 percenters and push them over the top.

The goal is to use our funds to get as many winning seats as possible. Spend too much, and it's wasted. Spend too little, and we lose the seat. And the more we raise, the more we don't have to make hard choices. The more we can dedicate to more candidates, including those who seem just out of reach.

You may well guess right if you give directly to candidates, but you may also guess wrong, and we have a team of professionals whose job it is to get it right. Admittedly, it's very hard to know exactly where to spend every last dollar. Sometimes politics is more art than science. But at least, with poll information and expertise, we are more likely to use the money knowledgeably and effectively. It's not like I claim complete expertise either. How the funds are distributed is ultimately determined by the entire caucus, based on a large number of varying factors.

I can think of several candidates whom we decided to finance at the last minute in 2017 that came through to win that we never originally expected to win. And I can think of another half dozen or so that were achingly close.

This is just a long way of saying that while you may enjoy hearing from me and from Senator Mark Warner (the Ranking Democrat on the Senate Intelligence Committee and the Senator most holding Trump's feet to the fire), the primary goal of the gathering is to raise money for a very important goal:

After four centuries, we can finally turn the page
and bring about the Virginia we've always dreamed of,
a Virginia where everyone has the opportunity to succeed.

Metro Re-Opened Today!
Blue and Yellow Lines Back in Service 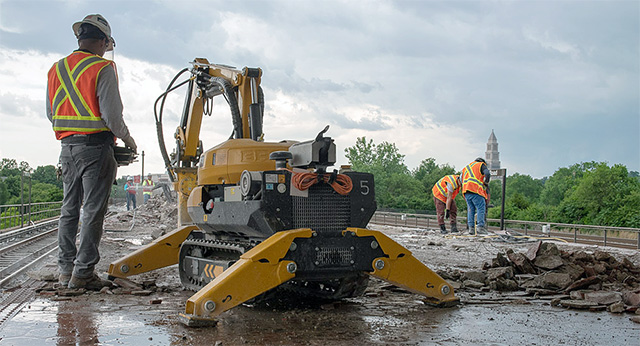 The Blue and Yellow lines opened today.
I haven't seen the new stations yet, but I'm told they look wonderful.

As I'm sure you know, all six stations south of National Airport underwent major renovations this summer. While some work will likely continue at each of the six stations into the Fall in order to finalize the station improvements, all six stations opened today.

Below are some of the improvements that have been and are being made to the stations:

In case you missed it, at a hearing on gun violence in August, Republicans unveiled their proposal that Virginia do exactly nothing to stop it.  To no one's surprise, they thumbed their nose at the Governor's call for an emergency special session and refused to allow the House or the Senate to consider any legislation to restrict gun violence — whether proposed by Democrats or Republicans — until after the voters make their choice on Election Day this November 5.

Republicans obviously think Virginia voters don't care much about gun violence. I told them to their face that I think they're wrong.

Most of the Delegates and Senators before the body used their time to describe their individual gun bills. Believing that to be a useless endeavor before a body controlled by Republicans that has been determined to do nothing for decades now, I took a different tack:

Watch my remarks by clicking here or on the image below. 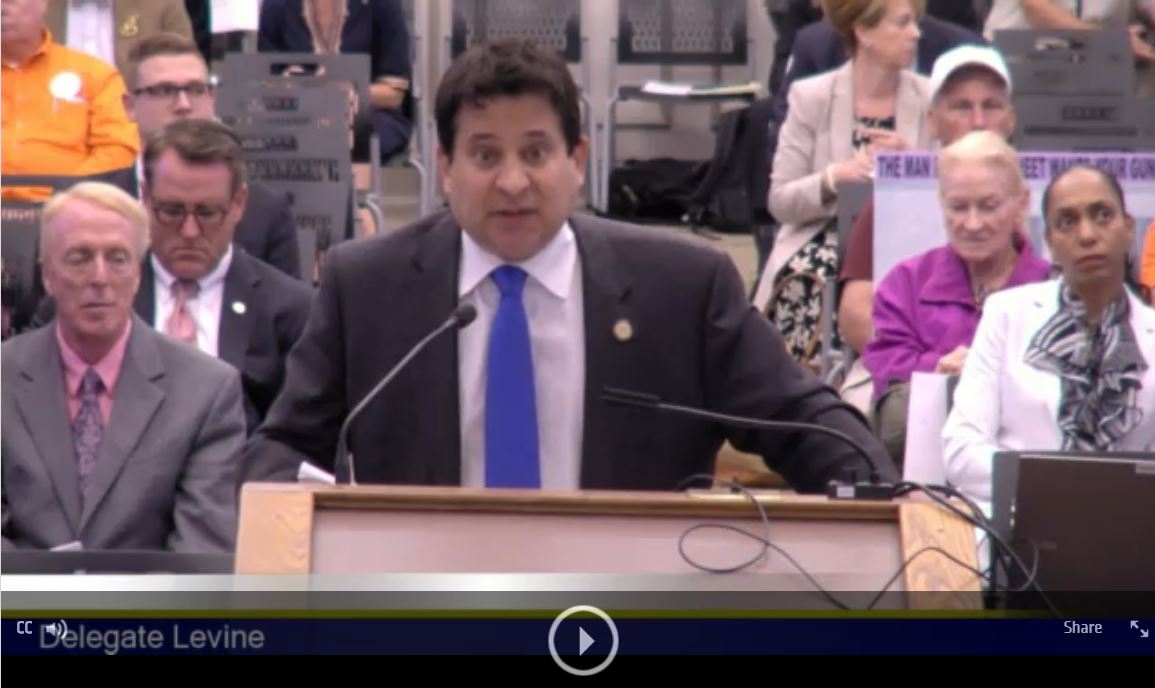 Click image above to watch my remarks before the Crime Commission.

It may not surprise you that Republicans were offended at my calling them out for inaction. That's why they repeatedly interrupted me. 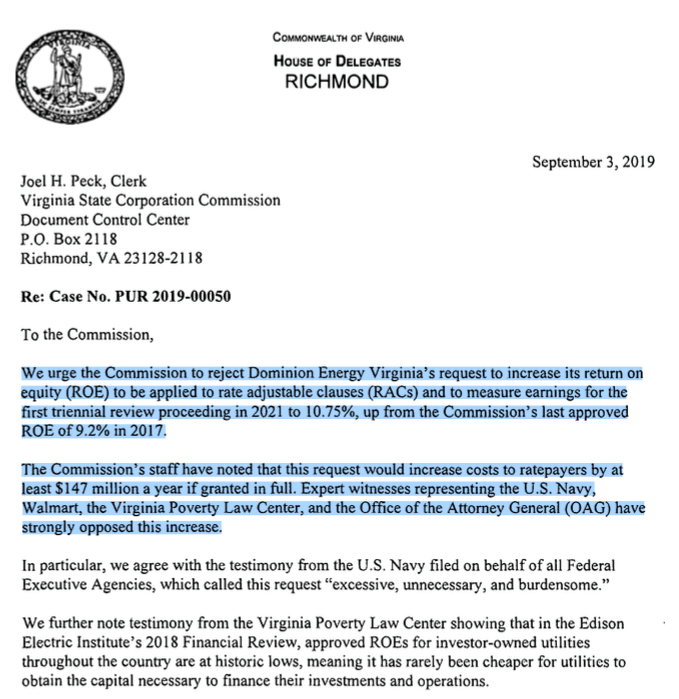 An excerpt from a letter that 36 of my General Assembly colleagues and I sent
to the State Corporation Commission urging them to not approve a utility rate increase.

Last week, I joined 36 of my General Assembly colleagues in sending a letter to Virginia's State Corporation Commission to request that they oppose Dominion Energy's request to increase its allowed profit level. If approved, Dominion's request for a 10.75% rate of return on equity would raise energy bills by $147 million in Virgina. We signees, all Democrats, joined the US Navy, Walmart, the Virginia Poverty Law Center, and Attorney General Mark Herring in opposing Dominion's request.

Click here to read our full letter to the State Corporation Commission.

Unfortunately, not a single Republican felt it necessary to try to hold Dominion accountable and stop them from ripping off Virginian ratepayers. That is because every legislator who has the courage to stand up to the energy monopoly and biggest political donor in the Commonwealth is a Democrat. 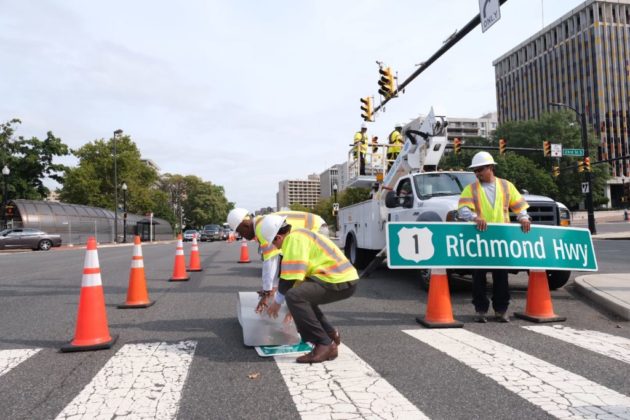 Arlington County Board Chair Christian Dorsey and I folded up the old Jefferson Davis Highway
sign that hung above Route One until Thursday morning. 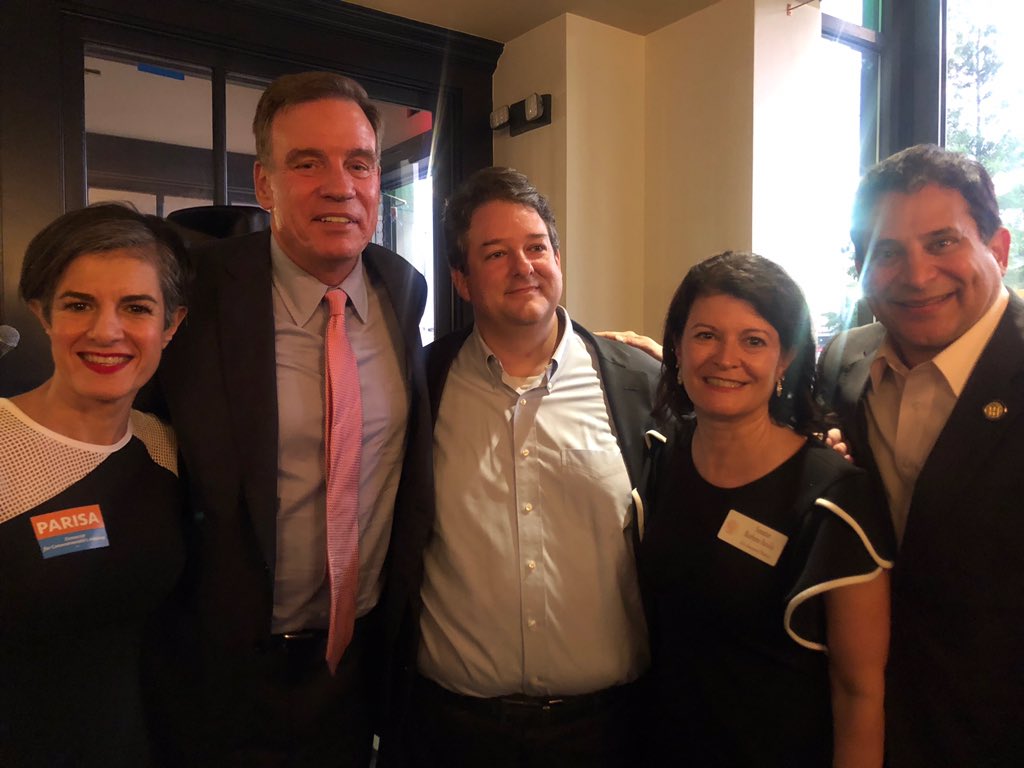 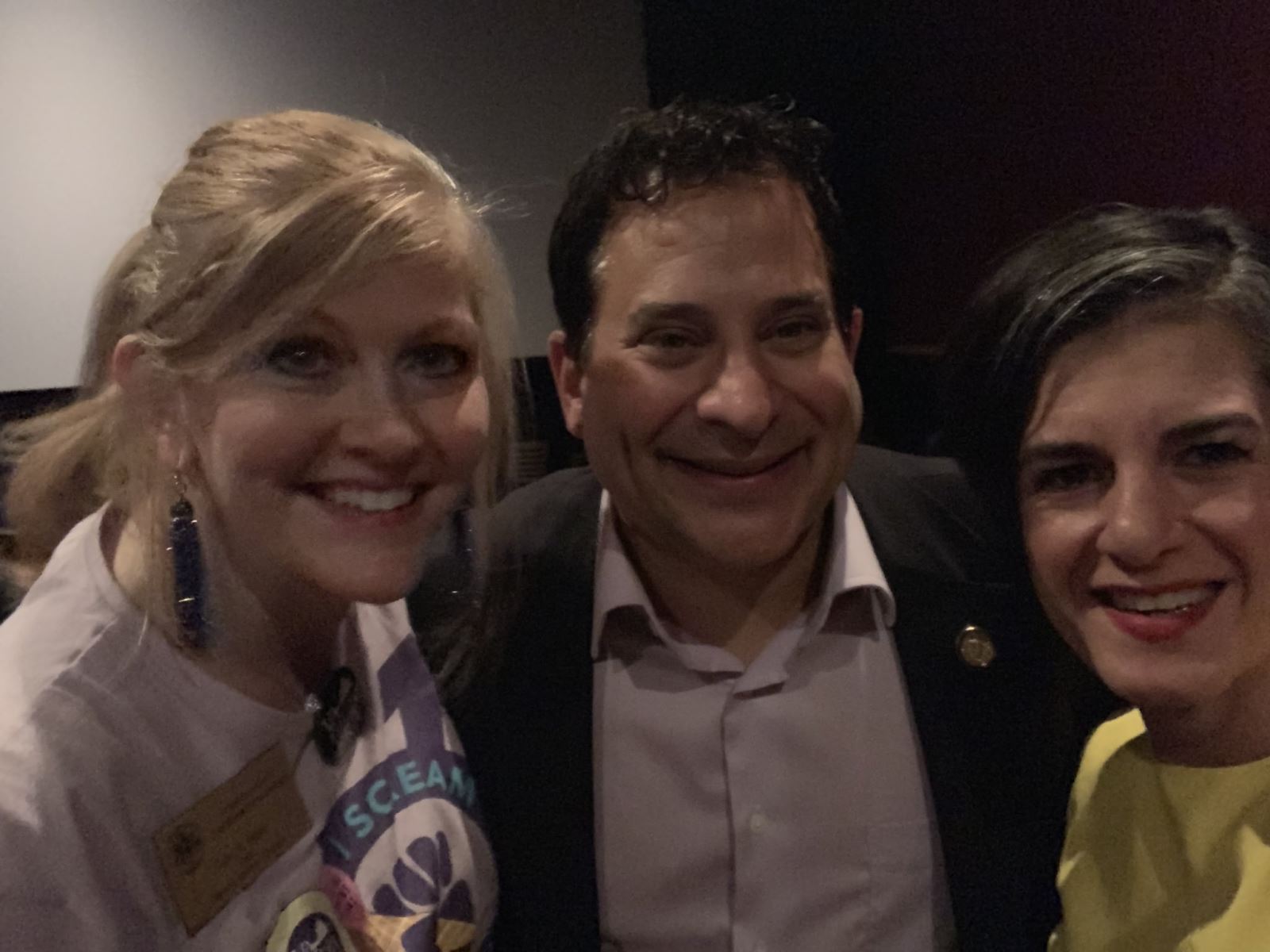 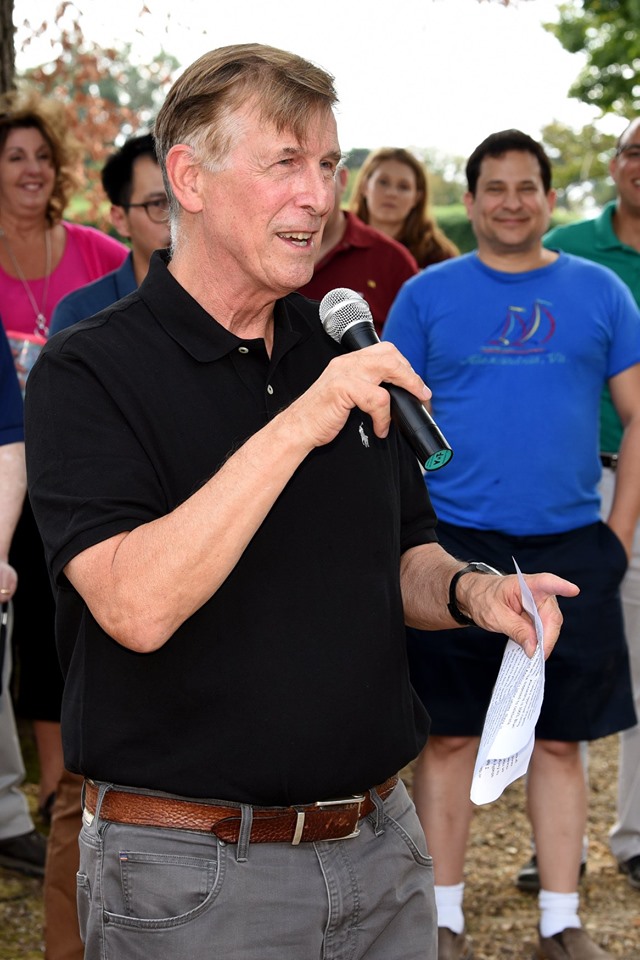 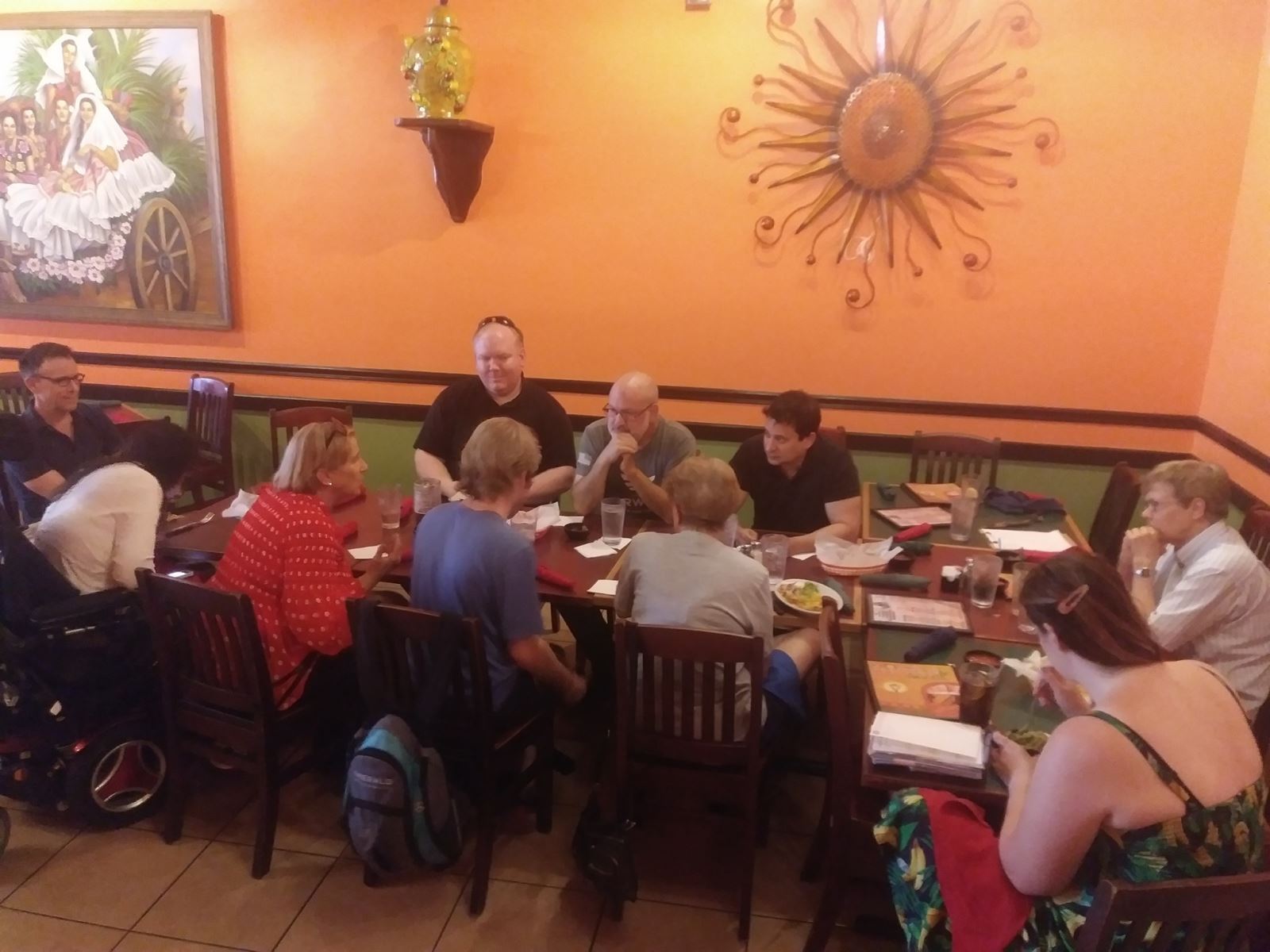 With constituents (and a few non-constituents) at the monthly meetup. 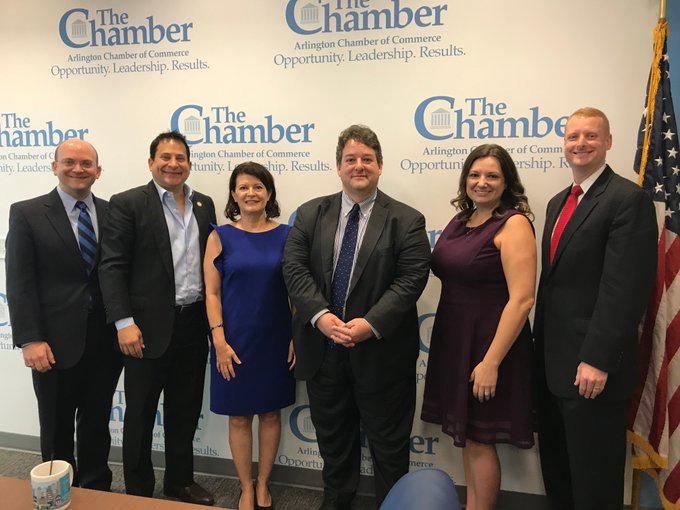 Senator Barbara Favola, Delegate Alfonso Lopez, and I spoke with the Arlington Chamber of Commerce's Government Affairs committee about what's in store for the 2020 legislative session. 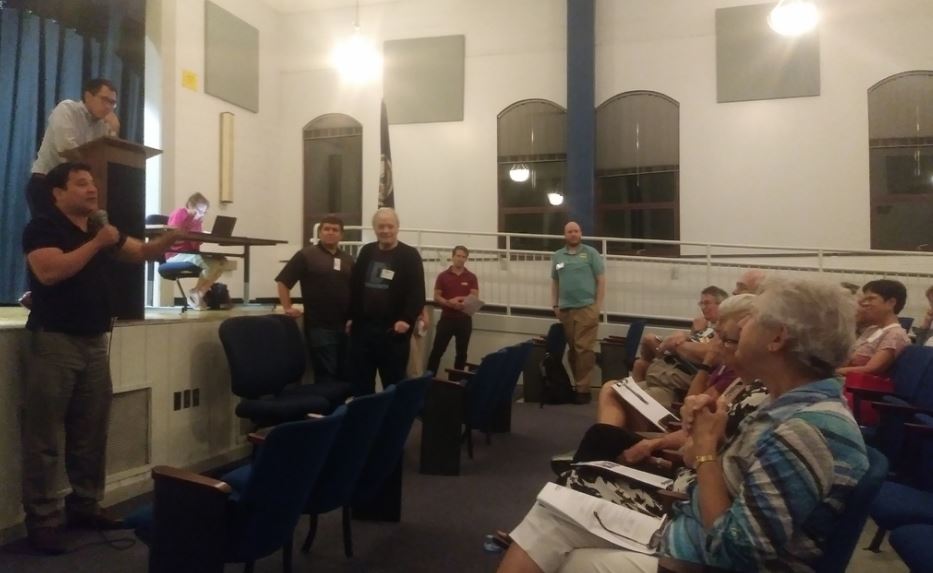 Speaking to the Alexandria Democratic Committee at their September meeting.

My speech about the connection between white supremacy and gun violence at the Heather Heyer Remembrance in Alexandria hosted by Safer Country. Click image or here to watch.

I thank you for the honor and privilege of representing you..