Why I Attended the 400th Anniversary
of the Virginia House of Delegates in Jamestown...

A re-enactor portrays John Pory, the first Speaker/Secretary
of the Virginia House of Burgesses on its first day of existence: July 30, 1619.

The legislative body, which changed its name to the Virginia "House of Delegates" in 1776
is the oldest continuously elected law-making body in the Western Hemisphere. 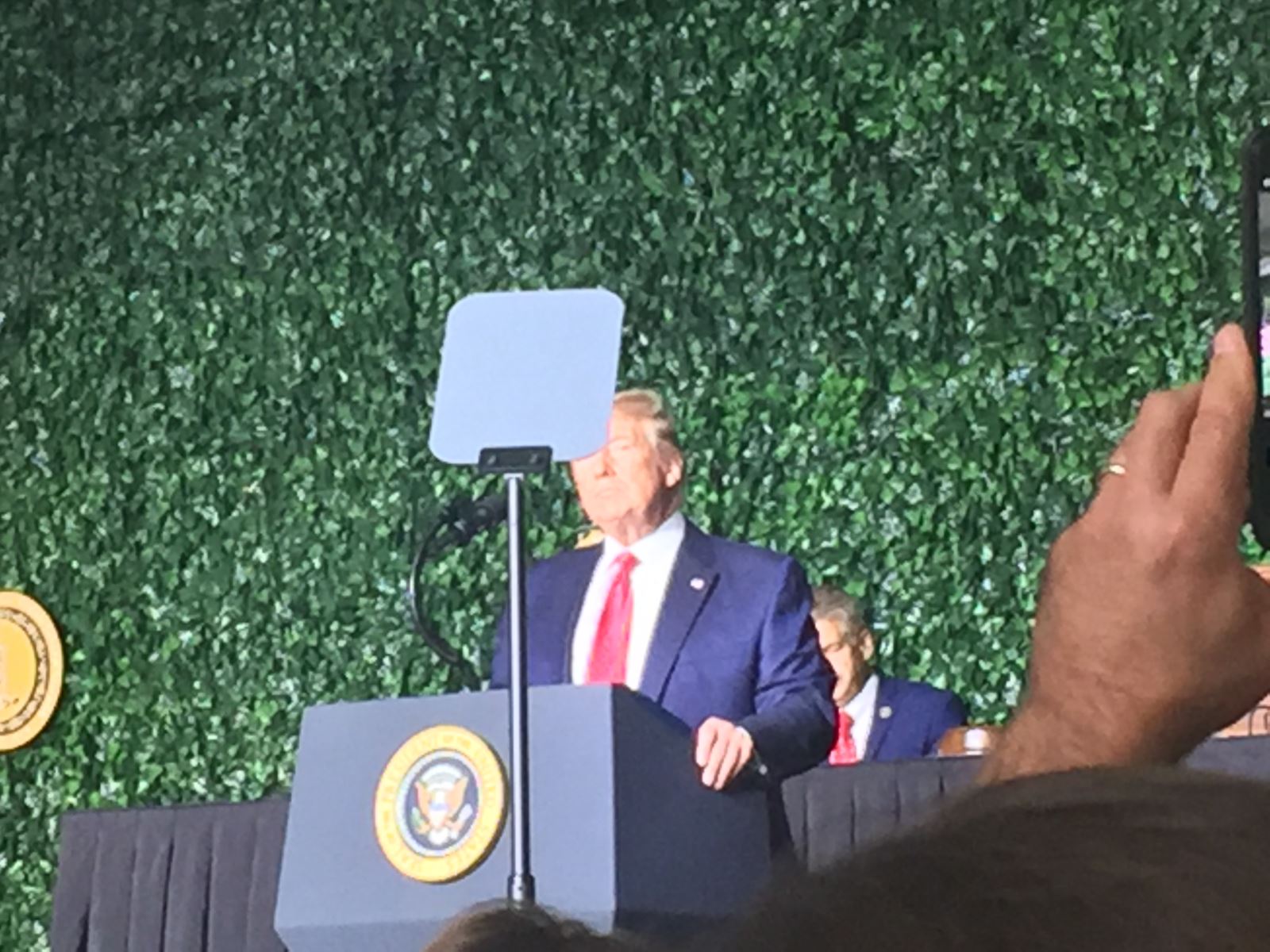 Donald Trump, casting an evil eye at me, as I walked out on his speech at Jamestown.

Tuesday, July 30, 2019, was the exact 400th Anniversary of the day in 1619 when representative democracy in America began.

If you read my newsletter sent to you that morning, I explained in some detail the great significance of that day and why I chose to attend the 400th Commemorative Ceremonial Session. I explained how the very restricted and problematic representative democracy of land-owning free Christian white Englishmen that began at Jamestown gradually improved over time to encompass an entire population in fifty states and become the foundation for the still-imperfect (but much better than 1619!) representative democracy that is today the United States of America.

As I described in that email to you, although we still have a ways to go (Virginia is the penultimate state in voting rights, for example), we have indeed come a long way. It was an event worthy of commemoration.

I also described why I had to protest it.

The President of the United States had been invited as its keynote speaker back in 2018. And whatever one thought of Donald Trump a year ago, it is impeccably clear today that, among his many, many flaws (described in more detail in my prior letter), Trump intentionally uses racism to promote white nationalism and is working to dismantle our core democratic institutions.

As I wrote you on the morning of the Commemorative Assembly:

What I didn't tell you that morning was how I was going to protest the President.

This article in the Richmond Times-Dispatch described our various forms of protest.

The Virginia House Democratic Caucus responded to the President's speech at Jamestown in several different ways.

The Virginia Legislative Black Caucus scheduled counter-programming, a series of events in Richmond commemorating the first arrival of Africans in Virginia, which occurred a few weeks after Jamestown on August 24, 2016. The event was held at the Lumpkin's Slave Jail at Shockoe Bottom, and many of my colleagues attended. After all, Virginia was largely built on the cruel forced labor of our black countrymen.

[These 19 Africans, enslaved by the Portuguese and purchased by English pirates, were brought to Jamestown. Some became indentured servants. But in 1640, when three indentured servants (two white and one black) ran away to Maryland and were captured in Virginia, the Virginia Governor's Council (the upper house in Virginia chosen by the Crown's Governor -- not democratically elected -- and acting as a court), decided to treat "a negro named John Punch" differently from the other two runaways, a "Scotchman" and a "dutchman." They sentenced the two white runaways to an additional year of service with their master and three years of service to the colony but sentenced Punch to servitude for life. In effect, slavery. Following another court decision in 1653 returning an African slave to his master, Virginia passed a law in 1662 codifying that all children born of an enslaved African mother would themselves be slaves. Legalized slavery would later spread from its roots in Virginia throughout the Southern United States until it was finally abolished at the conclusion of the Civil War. African Americans, brutalized by centuries of slavery and another century of Jim Crow laws, continue to suffer from this hateful legacy. The current President's blatant racism is just the most recent example.]

For those of us that decided to stay, we discussed how to express our disgust for the President's hateful rhetoric and policies. We lamented the fact that there is no obvious protest symbol for opposition to the President, except perhaps the pink knit hats of the Women's March which seemed too glib for the solemn occasion. Many women delegates chose to wear white, harkening back to the female members of the United States Congress who protested Donald Trump's State of the Union by wearing the color of the suffragettes. Looking for a more universal symbol, I suggested the White Rose, a symbol of resistance to Fascism. 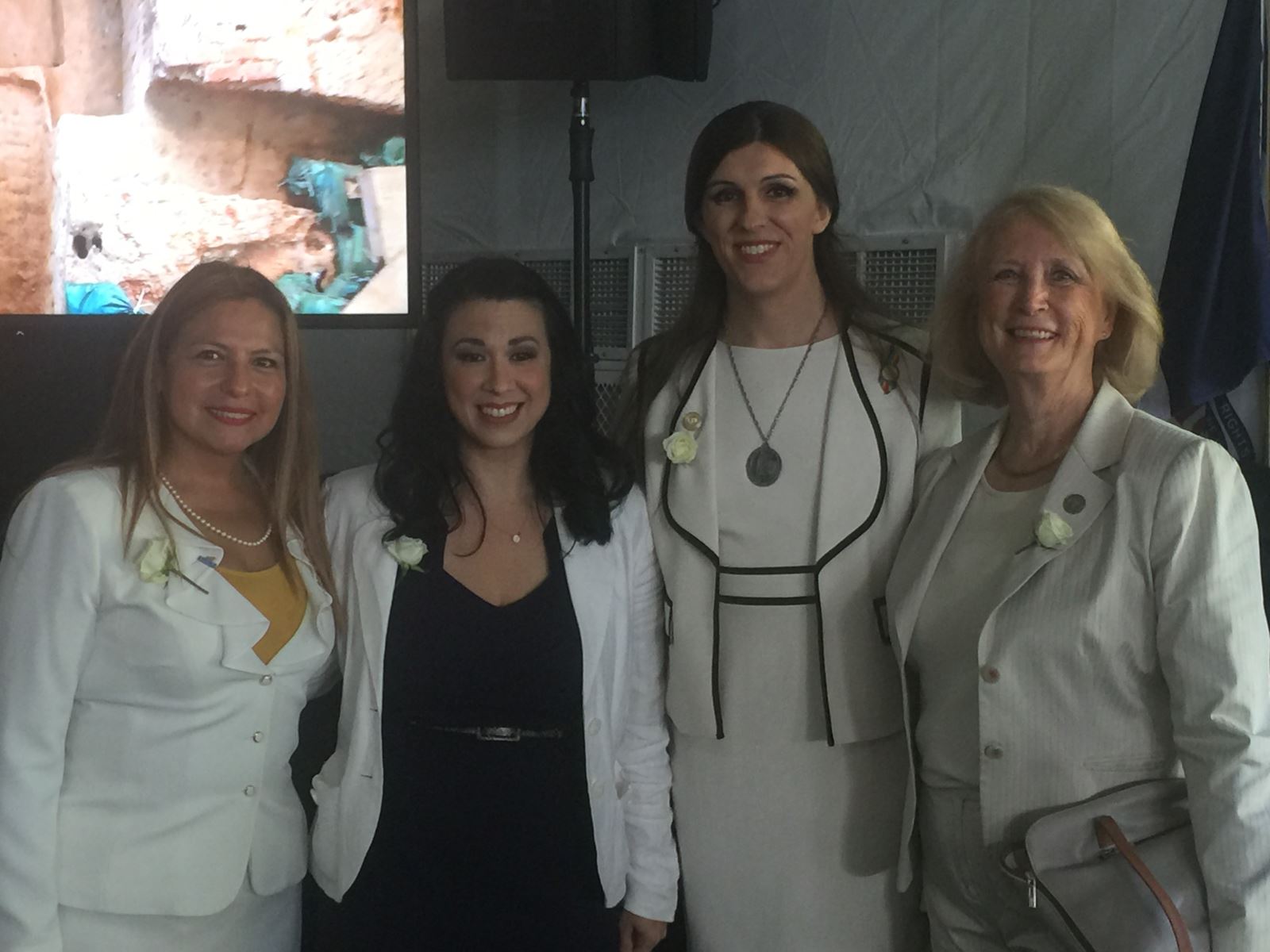 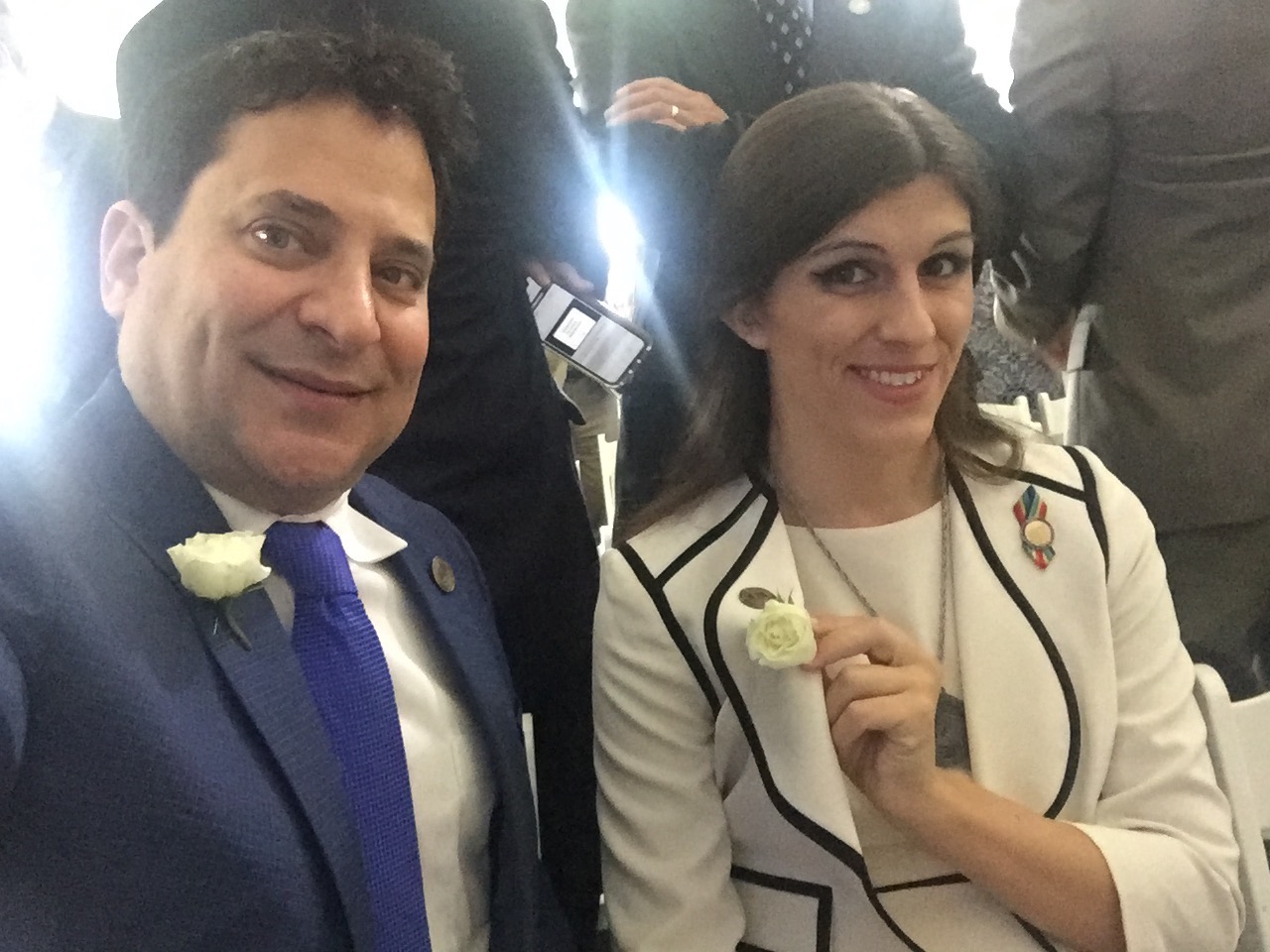 My fellow delegates and I wearing a White Rose and/or white to show our opposition to Donald Trump.
Virtually all of us wore the white rose.

One colleague, Delegate Ibraheem Samirah, decided to bring protest signs and shout out, "Mr. President, you can't send us back. Virginia is our home!"

For me, I decided I needed to walk out.

I have led and participated in dozens of protests as a citizen activist. As a student at Yale Law School, I led a protest against the Jew-hating invited speaker from the Nation of Islam, not by shouting down the speaker but by educating the attendees as to the hateful words this speaker had said in the past and by leading a silent walkout. I thought this would be the appropriate model here.

But even that decision was not without some consternation. I was sternly admonished in several official emails that once we sat down during the President's speech, we would not be allowed to leave. We were told the tent would be "locked down." Several of my colleagues warned me I might be tackled by the Secret Service, arrested, and/or prevented from leaving via locked doors.

I did not think that would happen. I posed no physical threat to the President. Only a political threat. My intent was to walk away from him. Not toward him. And obviously, the place was secure. I was not entering a secured facility. I was leaving it. There was no reason to "tackle" me.

I also did not think I'd be arrested. For one thing, it is illegal under Article IV, Section 9 of the Virginia Constitution (which I always carry with me) to arrest us during a session, except for treason, felony, or breach of the peace, and I was doing none of that.

Immunity of legislators. Members of the General Assembly shall, in all cases except treason, felony, or breach of the peace, be privileged from arrest during the sessions of their respective houses; and for any speech or debate in either house shall not be questioned in any other place.  -- Virginia Constitution, Article IV, Section 9

While federal law can "trump" state law (pun unintended), I felt that this Virginia Constitutional provision was an archetypal legislative provision that would be protected under the Tenth Amendment to the Federal Constitution. In fact, it is the antecedent to a similar provision in the United States Constitution that protects Members of Congress (Article 1, Section 6, Clause 1). In any event, I was more than willing to litigate it. I decided if I were charged, I would resist dismissal of the charges. To me, this was a core First Amendment principle as well as a Tenth Amendment protection. Presidential security needs should never be used as a pretext to ban free speech.

Finally, I didn't know if the exit doors would be locked. I didn't think they would be. (It's a clear fire hazard.) But I decided if they were, I would simply stand at the doors and request to leave. If not allowed to leave, I planned to stand with my back to the President in protest.

So armed with nothing but the Virginia Constitution and the United States Constitution, I stood up to leave.

And as I expected, no one tried to stop me. 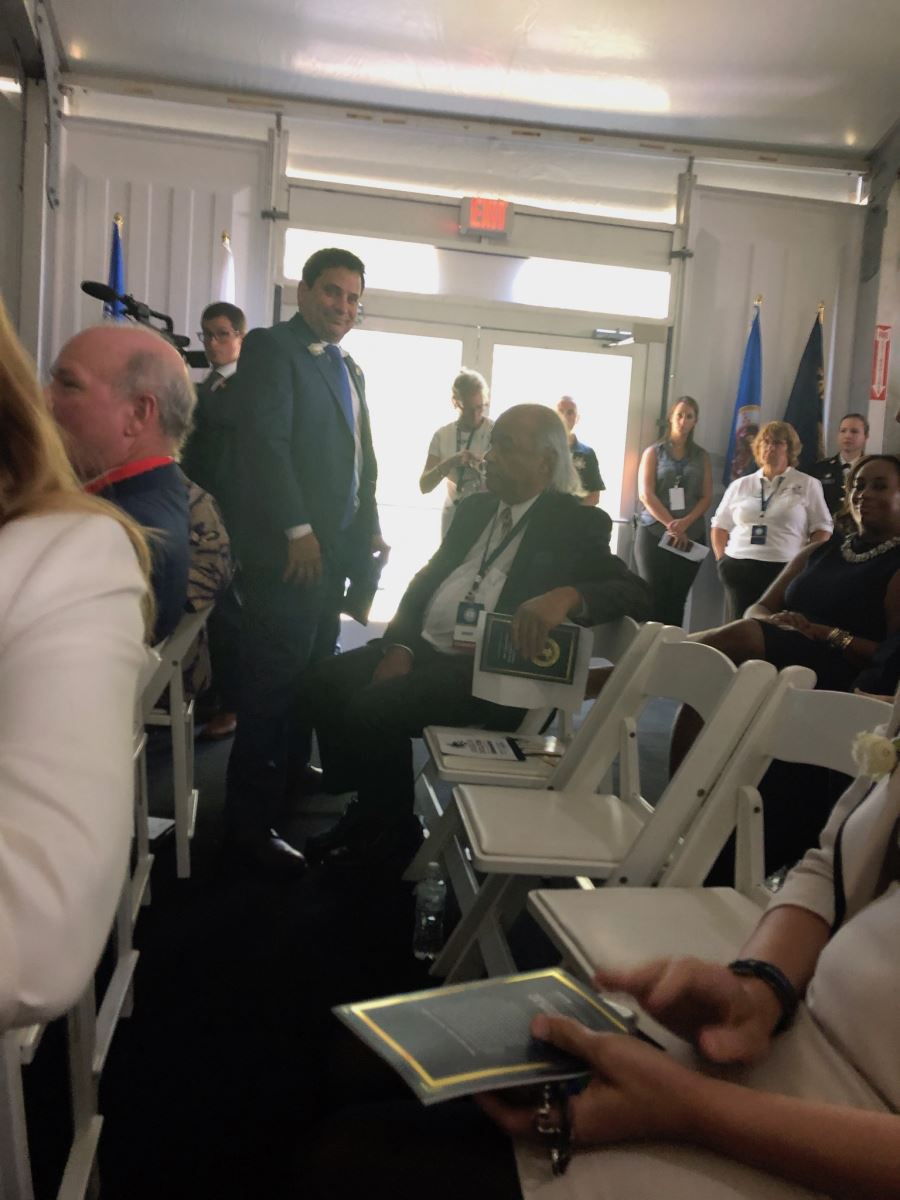 Standing up to walk out of the Commemorative Ceremony as a protest to Donald Trump's racism and policies
on July 30, 2019, the 400th Anniversary of the Virginia House.

We Democrats form a diverse Caucus. Therefore we chose to express ourselves in different ways.

But in our values we are united: united in our recognition of the importance of the 400th Anniversary of the House of Delegates and united in our contempt for the President's racism, corruption, and hate.