President Joe Biden and Vice President Kamala Harris (gosh, that feels good to say) have been inaugurated. I actually slept well on Wednesday night, for the first time in years. Wednesday's inauguration was a victory for all Americans. 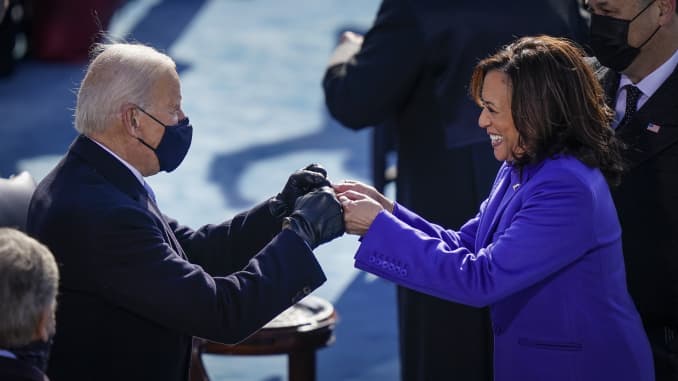 But I did take some time Wednesday afternoon - and my staff did, too - to watch the Inauguration, and soak in this historic occasion.

And then it was back to work. Because as (future President?) Amanda Gorman said at the end of her riveting inaugural poem:

That's what our work as legislators is about. Not just talking a good game about change, but being the change we want to see.

I am pleased to say that we had a busy, successful, first full week of Virginia's 2021 legislative session, with six of the ten measures I've proposed this year moving forward. (Why only ten? Because we were limited to seven bills this year. I also included a constitutional amendment, a study, and a budget amendment, which were not included in the bill limit.)

I passed one bill out of the House and sent three to the House Floor where they'll be voted on next week. I also presented my budget amendment to the House Appropriations Committee and my study to the House Studies Subcommittee.

The Good Apples Act
Passes the House with Bipartisan Support
On to the Senate!

I shared video of my subcommittee presentation of the Good Apples Act, HB1948, in last week's newsletter. The bill passed the House on Wednesday by a vote of 57-42. It now goes to the Senate, where the bill stalled out during the Special Session. It is always a good feeling to pass a bill with bipartisan support, and I hope that bodes well as I make the case for it in the Senate.

Three of My Pro-Democracy Bills Sent to House Floor

1. NO GUNS IN POLLING PLACES AND VOTE-COUNTING CENTERS

My Safe Elections Bill (HB2081), banning guns at polling places, vote counting centers, and recount centers, passed the full Privileges and Elections Committee on Wednesday. It is set for a vote by the full House on Monday. The bill protects both voters and election workers from intimidation. Those with guns don't make the rules. Voters do.

"If you want to lobby us, use your voices.
If you want to intimidate us, use the ballot box.
Guns have no place in the public square."
-- Mark Levine

The bill has the support of various gun violence prevention groups, including the Coalition to Stop Gun Violence, Giffords, the Brady Campaign, and Moms Demand Action for Gun Sense in America, as well the Virginia Civic Engagement Table, a coalition of more than 40 progressive groups, and the Voter Registrars Association of Virginia. 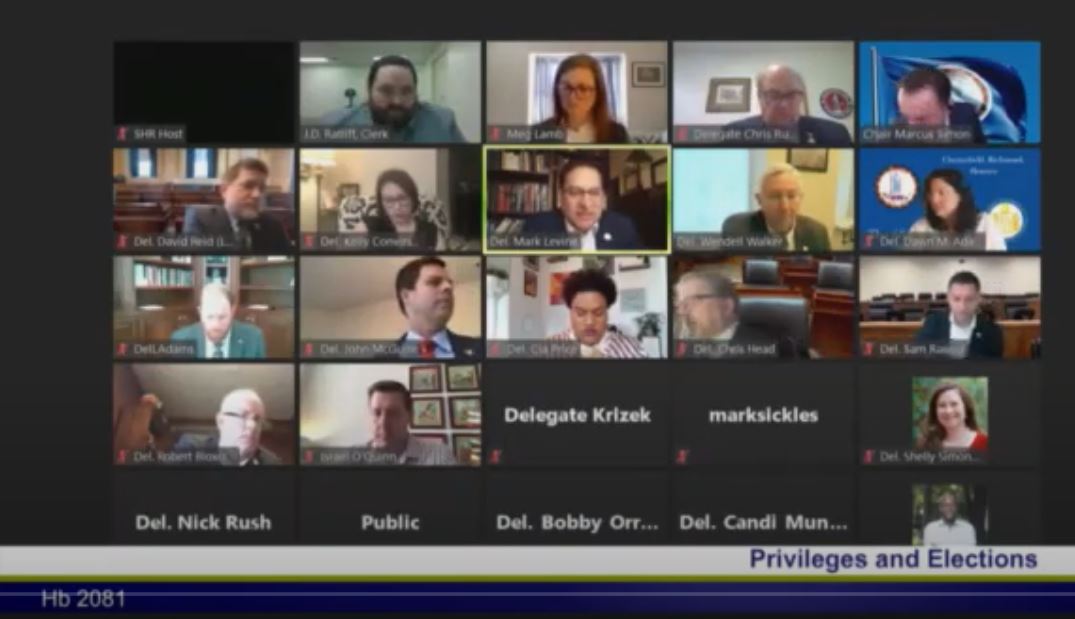 Watch me present my Safe Elections Bill by clicking here or on the image above. ​​​​​​

2. NO GUNS IN CAPITOL SQUARE AND GOVERNMENT BUILDINGS

My Safe Capitol Bill (HB2295), banning firearms in the Capitol, Capitol Square, and state government buildings, passed the House Public Safety Committee Friday morning. It will most likely be voted on by the full House of Delegates next Wednesday. This bill, like my Safe Elections Bill, has tremendous grassroots support. 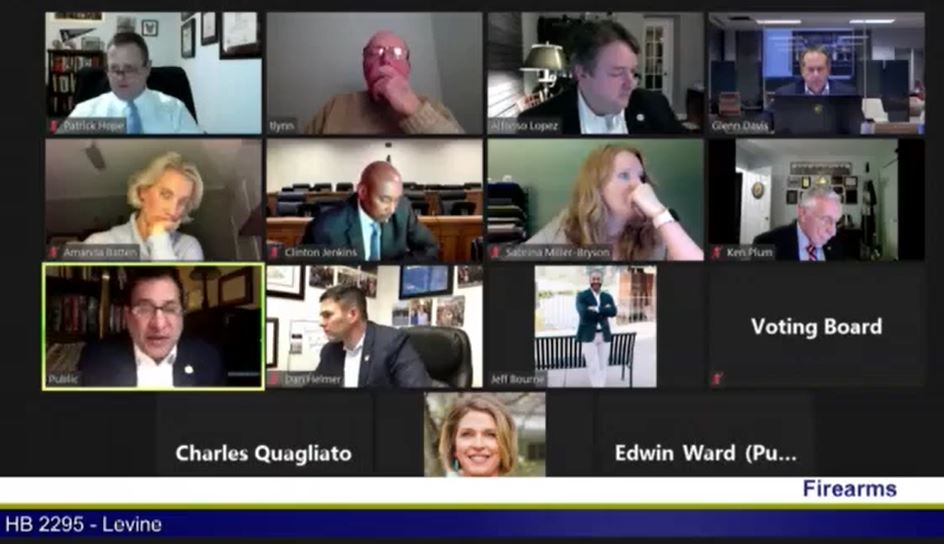 Watch me present my Safe Capitol Bill by clicking here or on the image above.

Finally, HB1931, my Virtual Meetings bill, unanimously passed the General Laws Committee on Thursday. The bill allows people serving in local government to participate virtually in public meetings when they need to take care of a sick family member or attend to a personal matter. The bill is a recommendation of the Virginia Freedom of Information Advisory Council and is supported by the Virginia Municipal League, Virginia Association of Counties, more than 100 local elected officials, as well numerous women's groups.

I think we have learned during the COVID pandemic that virtual participation, while not quite as good as "being there," still can accomplish many things. With this law, Virginians with substantial responsibilities in family caregiving will have a greater opportunity to serve their communities as well. 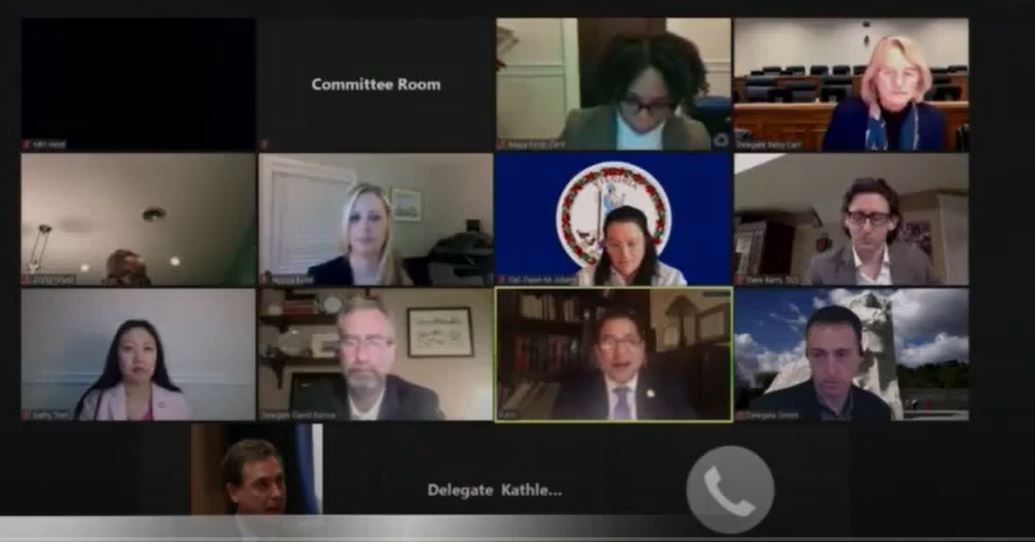 Watch me present my Virtual Meetings Bill in subcommittee by clicking here or on the image above.

HJ552 will create a joint subcommittee on urban and inland flooding to develop a comprehensive and coordinated planning effort to address recurrent flooding in inland and urban areas throughout Virginia.

As folks in Del Ray and other parts of Alexandria know well, the 100-Year Flood model, by which areas are predicted to flood once in a hundred years, is broken. Climate change caused three so-called 100-Year Floods in the 45th district just last year! We've had studies in Virginia on coastal flooding but never a study on how to mitigate the urban and inland flooding that has repeatedly devastated our community and others in our Commonwealth. I want to think the many citizens of the 45th who brought this to my attention and urged action.

I worked with Alexandria to craft another bill to reduce inland flooding but didn't have room to introduce it because we are limited to seven bills this year: SB1309, introduced by Senator Adam Ebbin, expands local authority to fund flood prevention and mitigation. It passed the Senate unanimously on Thursday.

We have an excellent coalition supporting the study: Delegates on both sides of the aisle from across Virginia have signed on as co-patrons, and the bill is supported by the Virginia Municipal League, the Virginia Association of Counties, the Sierra Club of Virginia, the League of Conservation Voters of Virginia, the American Society of Civil Engineers, the American Council of Engineering Companies, and the Home Builders Association of Virginia.

As I told the subcommittee, when an idea has support from Democrats and Republicans, urban representatives and rural representatives, environmental groups and developers, its time has clearly come.

Sarah Taylor, the wonderful Legislative Director for the City of Alexandria, and I presented HJ552 to the Studies Subcommittee of the House Rules Committee on Friday morning and we were successful.

Watch me present my Flooding Study in subcommittee by clicking here or on the image above.

In 1902, after every African-American elected official was driven from office in Virginia and as black people were being systematically purged from voter rolls, the all-white General Assembly established an annual allocation for the care of Confederate graves. Since then, the United Daughters of the Confederacy (UDC) has received over $9 million in funding from the Commonwealth of Virginia to maintain Confederate memorials. I have introduced a budget amendment to finally remove this funding. If the UDC wants to maintain statues or gravesites honoring slaveholding traitors, they can still do so, but they have to raise money from private funds and not rely on taxpayers to do so.

This week, I presented my amendment to the House Appropriations Committee, which considers them all together as part of the budget package and votes on them at a subsequent hearing. This was their annual hearing at which they listen to budget amendments being proposed by Delegates who do not sit on the Appropriations Committee. I'm hopeful my amendment will pass, particularly as it will save Virginia taxpayers' money rather than add to the budget the way most budget amendments do. 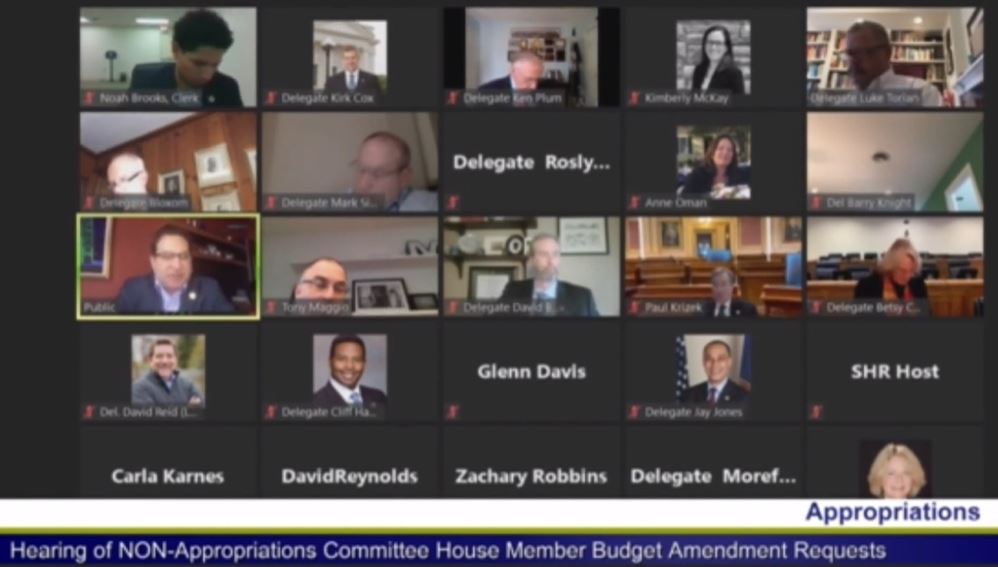 Watch me present my budget amendment by clicking here or on the image above.

Virginia Could Have More Vaccines.
Trump Said "No. We Don't Want Them." 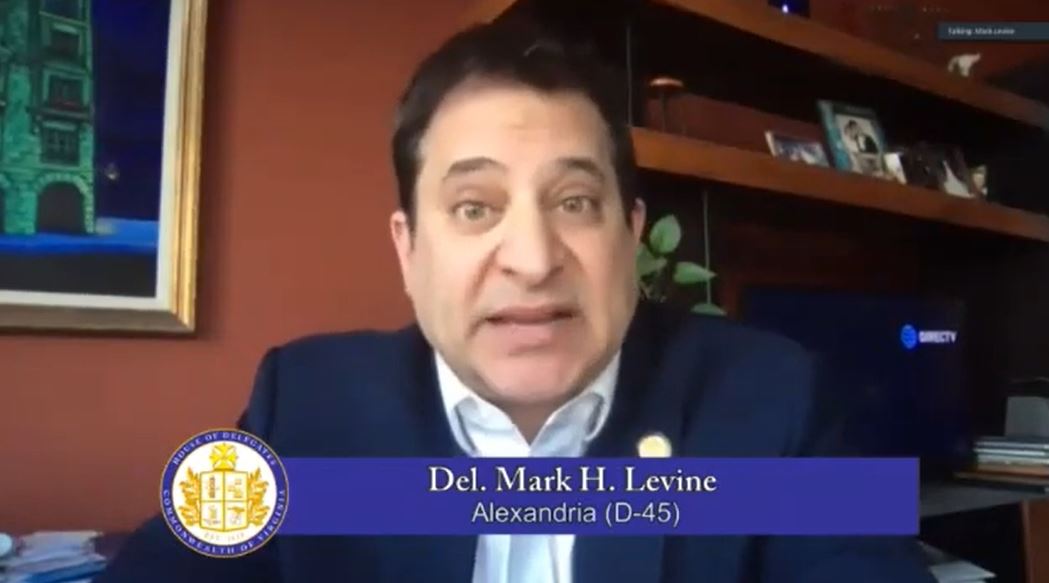 I didn't plan to speak on the Floor on Wednesday,
but when my Republican colleagues ignored basic math and the undeniable truth
that Trump's incompetence and heartlessness has been deadly,
I felt a need to speak up. Watch by clicking here.

I miss meeting with folks in person in my office, but when there's a will, there's a Zoom.
Here are three of the many groups I met with this week:

The National Federation of the Blind 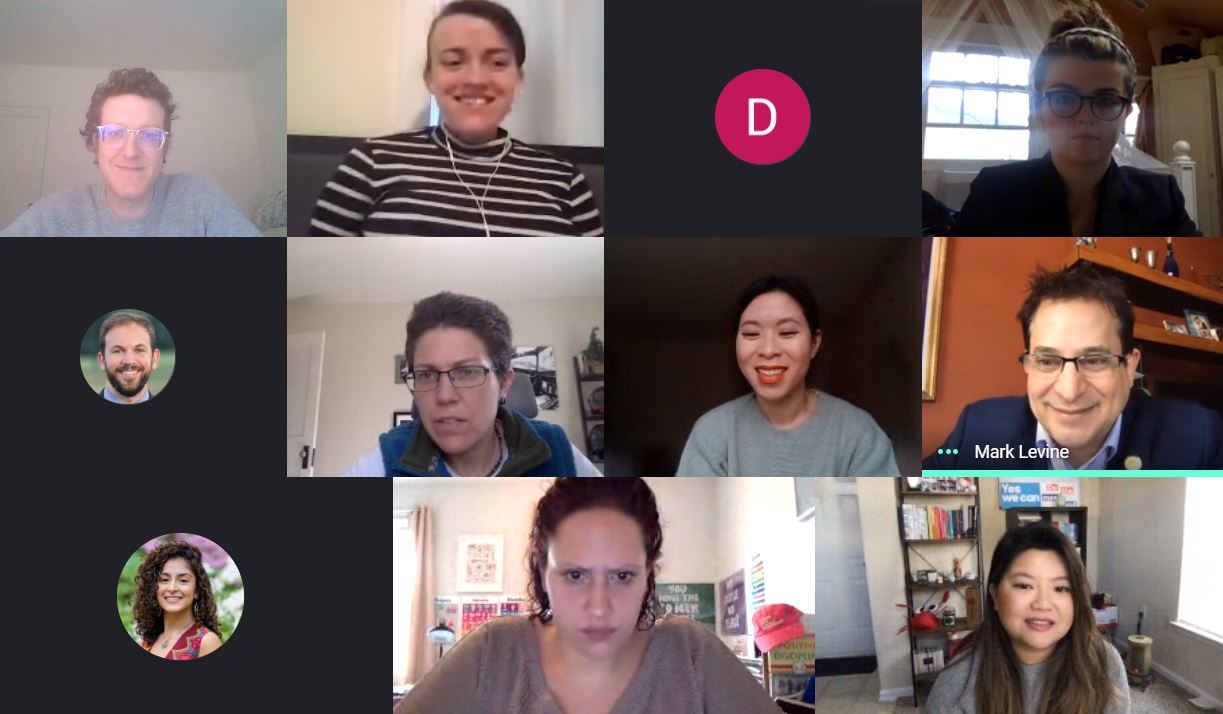 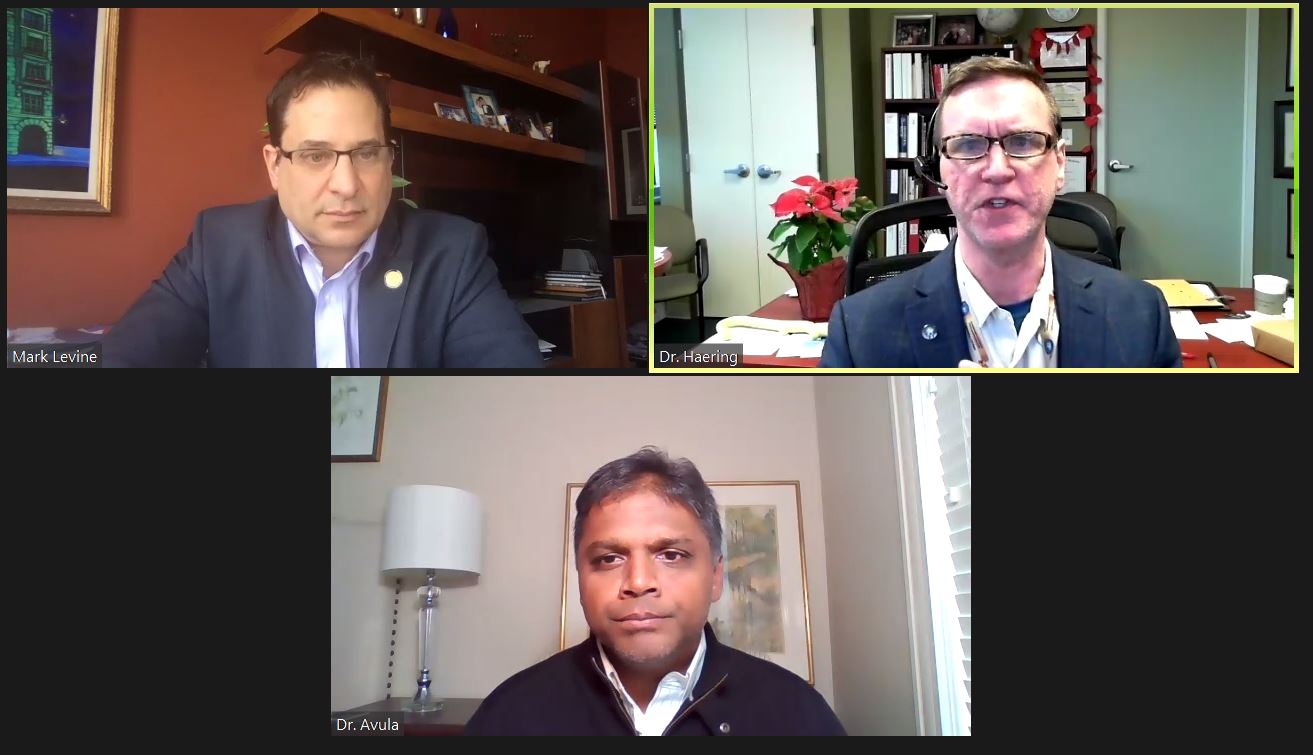 Click above to watch the Alexandria Vaccine Town Hall.

I hosted the Arlington Town Hall, with my fellow Arlington Delegates Patrick Hope, Alfonso Lopez, and Rip Sullivan. An incredible 750 people showed up. We had only room for 500 on zoom; so we did the overflow on Facebook. We were joined by:

Watch the Arlington County Vaccine Town Hall by clicking here or the image above.
If you have Facebook, you may prefer to watch it there, so you can see all panelists on the screen.

I also co-hosted a Fairfax Town Hall with two of my fellow members of the Fairfax County delegation, Delegate Kaye Kory and Senator Dave Marsden. We were joined by:

Senator David Marsden has yet to provide the archive of this event, but when he does,
I will share it at facebook.com/LevineforVirginia and in my newsletter next week.