Find out who is on your ballot

Find out where to vote

The Check is in the Mail!

Above is my tax rebate check. Did you get yours?

If you're married, the tax rebate check should be $220.

You almost didn't receive that check. Virginia Republicans pushed hard to make all the benefits of the Trump Tax Plan flow to the richest Virginians, but we Democrats fought tooth and nail to make sure that all Virginians would benefit.

You can read all about it in the newsletter I sent at the time.
(Scroll down to "VICTORY".)

The heart of the tax benefit was to increase the standard deduction and thereby deliver $110 to every taxpayer. Although the compromise came too late in the session to change the 2018 tax forms in time to give you the rebate in the spring, we were able to deliver by October. Frankly, I had hoped the rebates would go out over the summer, but better late than never!

You should see the change in the standard deduction on your tax returns when you file your 2019 taxes next year, due May 1, 2020.

Click Here to Register
or to Confirm You're Registered

If you want to vote this November 5 (and surely, you do!), you must be registered at the correct address no later than TOMORROW October 15th. 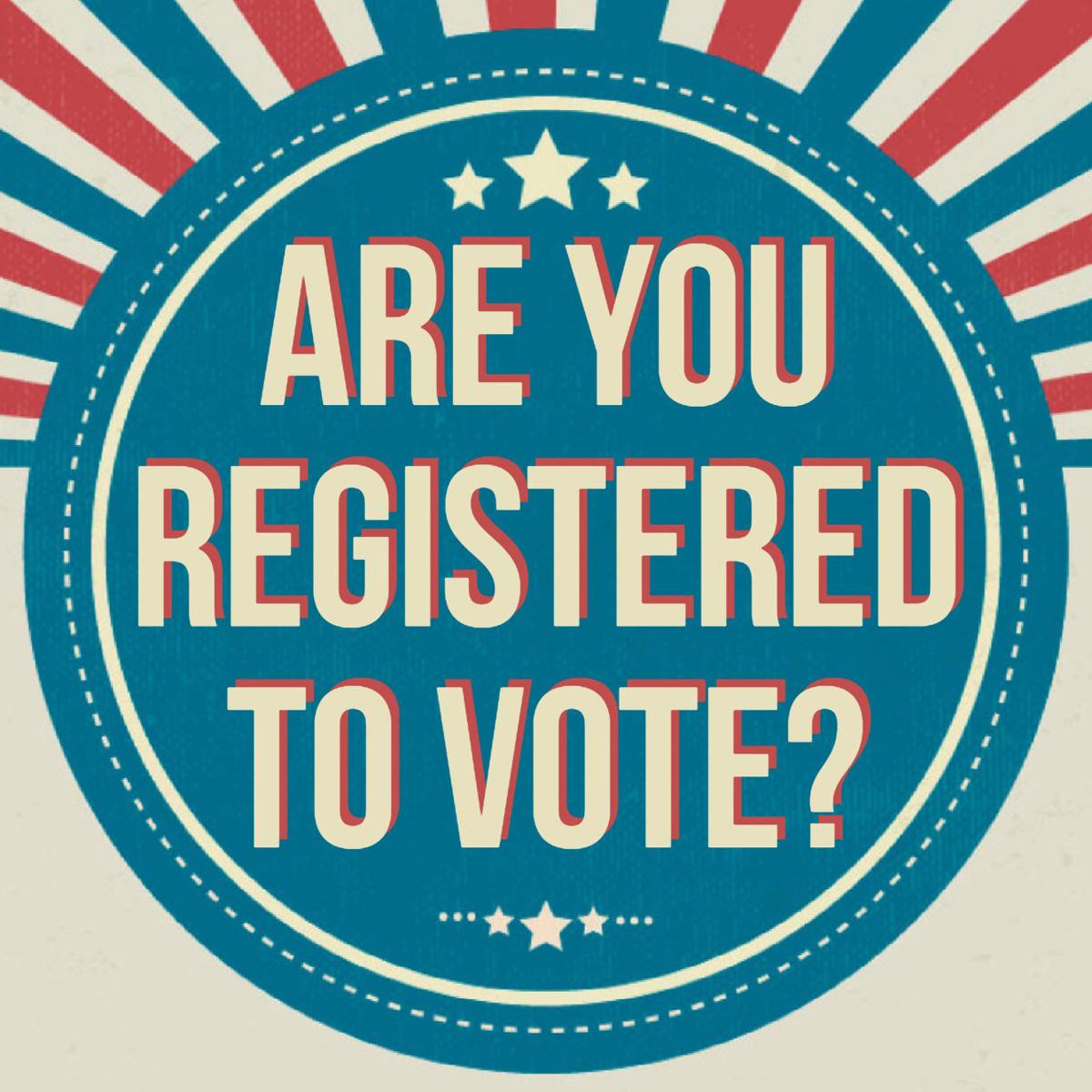 Taking on the Fox News Narrative
on IMPEACHMENT 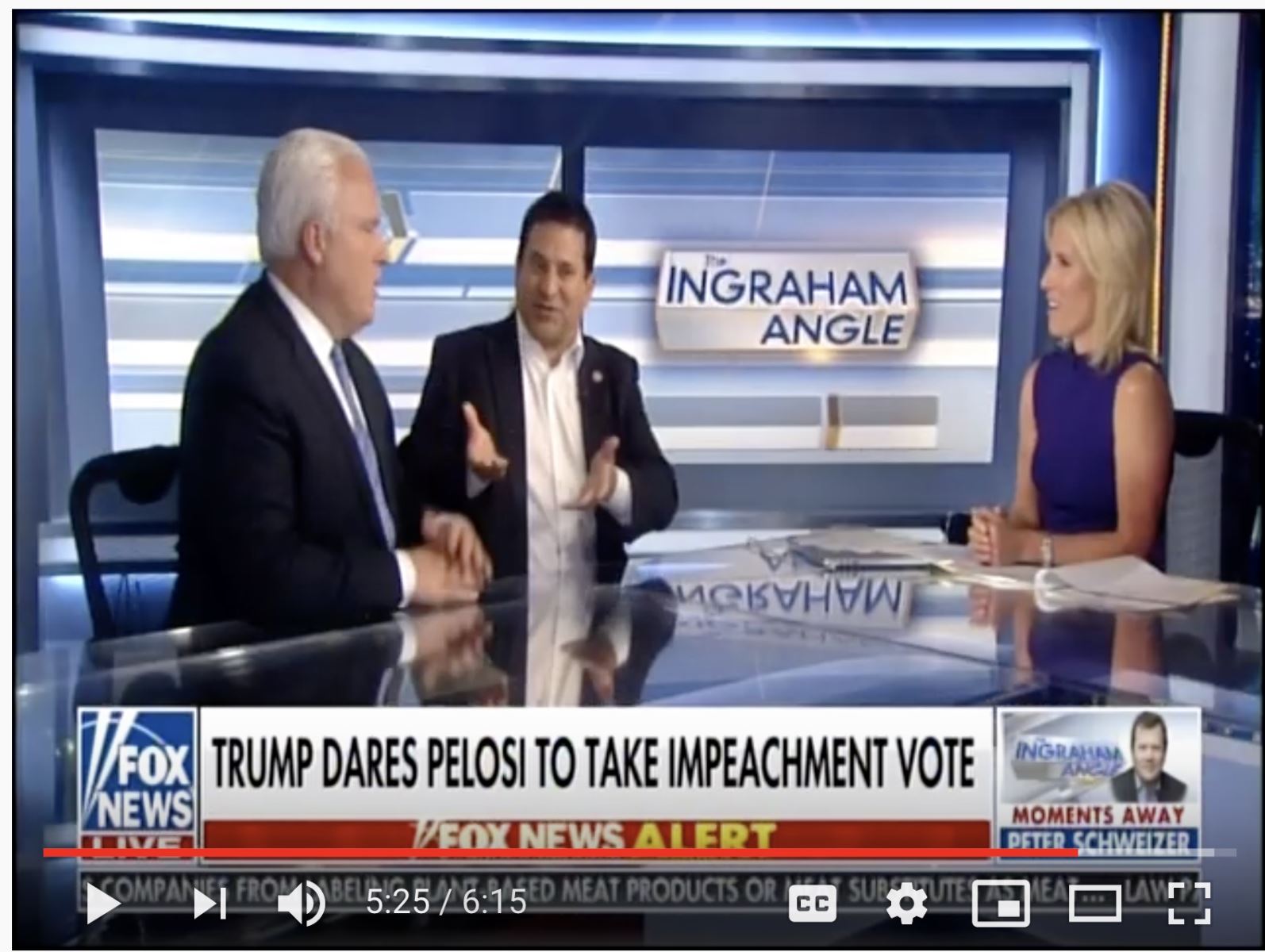 There are 20 approved reasons to vote absentee.

The best way to vote absentee is in person, if you are able. Voters with a disability or illness that makes it difficult to walk or stand may vote curbside. You never have to leave the car. By completing your application at the polling place and placing your ballot in the voting machine yourself, you can be sure your ballot is counted. You won’t risk mail delays or problems or mistakes in completing your application.

As you'll recall from my last week's newsletter, a constituent of mine, Victor M. Glasberg, filed a lawsuit on September 5th in federal court in Alexandria on behalf of three Virginian couples who wanted to challenge the constitutionality of a state law requiring people to state their race on marriage applications.

And I stated publicly that I would introduce legislation next year to get rid of this requirement in Virginia, a vestige of Virginia's Jim-Crow laws.

The Richmond Times Dispatch picked up the news of my proposed bill in a front-page story. 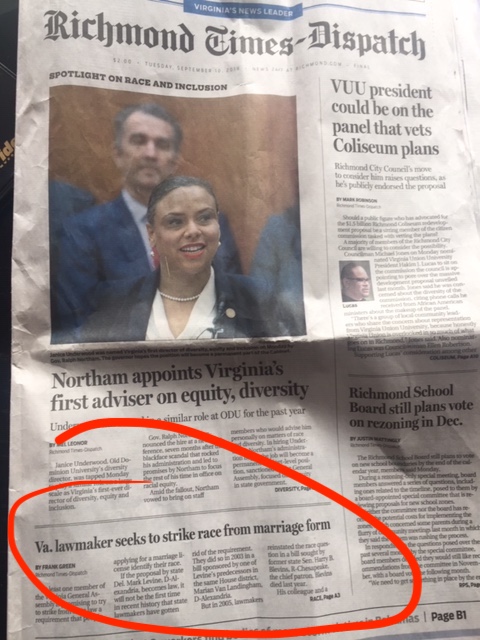 Upon news of the lawsuit and my plan to change the law, Virginia Attorney General Mark Herring ruled that couples applying for marriage licenses would no longer have to list their race on state forms; they would now have the option to decline. But, as I wrote last week, "I still think we can do better. Why should this offensive question be asked at all?"

This week, we did better. Glasberg won his lawsuit. A Federal Court struck down the law as unconstitutional.

But as promised, I will still introduce the legislation next year to remove two words (“and race”) from the law requiring age and race to be recorded for marriage licenses in the Commonwealth.

This unconstitutional law should be stricken from our Virginia statutes.

Rainbow Rights Before the US Supreme Court

Last week, the United States Supreme Court heard oral arguments on whether the Civil Rights Act bars employers from discriminating against their employees on the basis of their sexual orientation or gender identity. 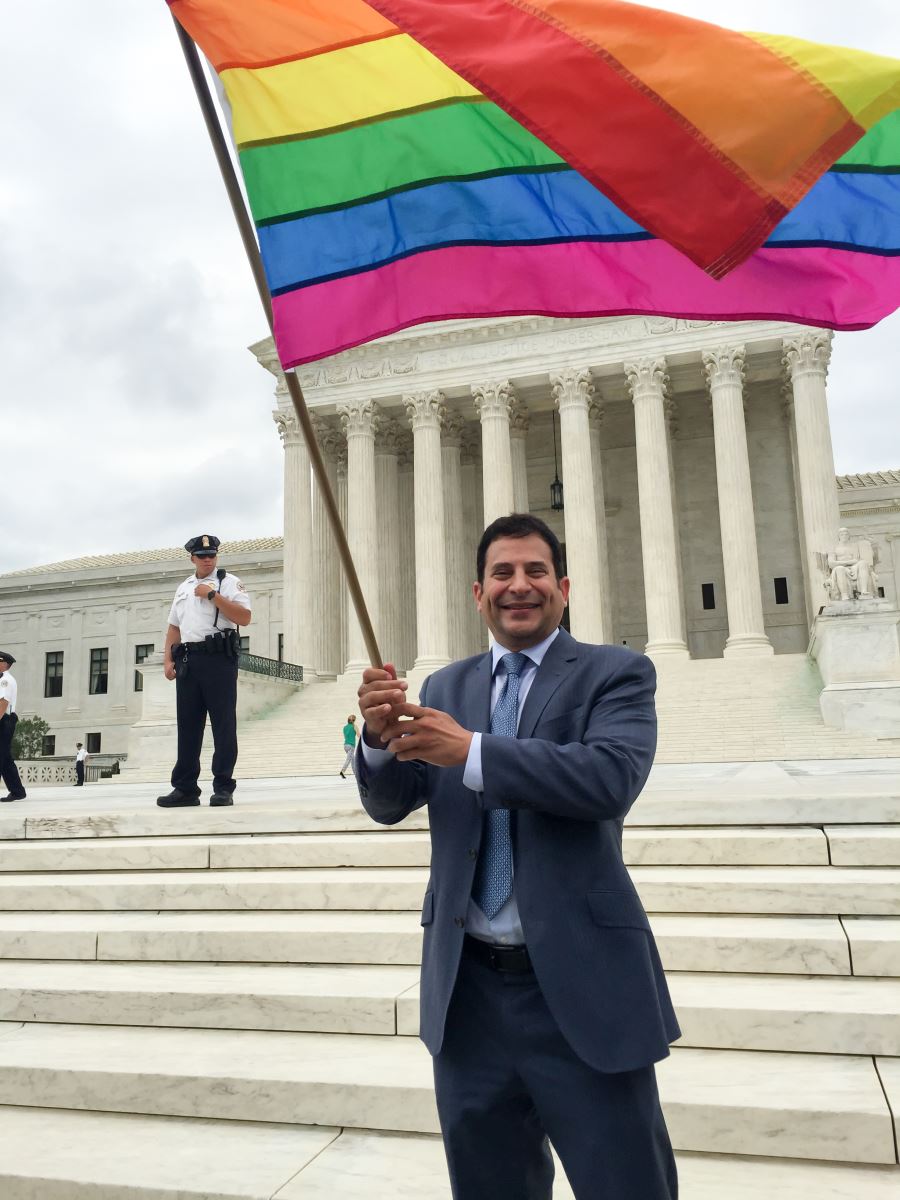 Title VII of the Civil Rights Act bars employment discrimination on the basis of sex. Does it ban an employer from firing his gay, lesbian, bisexual, or trans employees?

In a similar vein, trans folk are discriminated against precisely because they are not being allowed to present themselves based on their sexual identity. If they presented as a different gender, there would be no discrimination.

I have no idea who will prevail in this argument before our very conservative Supreme Court. The Court is only conservative, of course, because Senate Republicans in 2016 violated a 227-year-old American tradition dating back to the first President George Washington in 1789 and, for the first time in American history, they told a sitting President that he would not be allowed to nominate any Supreme Court justice for consideration by the Senate.

I believe this unprecedented power grab was unconstitutional. In the past, the United States Senate has occasionally rejected Presidential nominees. But from 1789 to 2016, the Senate never once refused to even consider a Presidential nominee, much less all Presidential nominees. In effect, Republicans have banned the 227-year-old practice of allowing a President of one party to appoint a Supreme Court Justice when the Senate is controlled by the other party. That happened hundreds of times in American history, but sadly, it is unlikely to ever happen again. That's why it's so vital in 2020 that we not only change who is President; we must also change the composition of the Senate and elect a Democratic majority. And long live Justice Ruth Bader Ginsburg!

If we flip Virginia blue, of course, it will not matter what the US Supreme Court decides, at least with regard to LGBT discrimination in Virginia. Why not? Because I'm confident my comprehensive bill -- which I've introduced every single year I've been in office -- to ban discrimination on the basis of sexual orientation and gender identity in employment, housing, public accommodation, and many other things will finally be allowed to be considered in committee, voted on the floor, and become law.

Not a single Republican in the entire Virginia House of Delegates supports protecting any LGBT Virginians from discrimination.

Republicans want to allow Virginia private employers (and even the Virginia state government!) to fire all their rainbow employees just because of who we are or who we love. In sharp contrast, Democrats believe in equality under the law, including the equal opportunity of all Virginians to rent an apartment, buy a sandwich, or to work – based on how well you do your job, instead of based on the gender of your spouse.

If you, like me, reject bigotry, you know how essential it is to remind your fellow Virginians to vote against every single Republican in the House of Delegates. (For more on how the Republicans killed LGBT-rights legislation in Virginia 2019, check out my newsletter posted on the week it happened. Scroll down to section entitled Republicans Vote for Anti-Gay Bigotry.)

Standing up for the Kurdish People

We should not betray our allies to be slaughtered.

I realize I can't do much as a state legislator to stop the atrocities and mass murder green-lighted by our psychotic, corrupt, criminal, and deeply insecure Commander and Chief.

But I can speak out.

I'm ashamed that our country, supposedly the Land of the Free and Home of the Brave, is now championing dictatorship, mass murder, and war crimes.

Trump and his Republican yes-men are actively helping ISIS, freeing American-hating terrorist murderers in order to line the pockets of the Trump crime family with a little bit more money from Trump Towers in Istanbul.

But as one person in the crowd at the Rally to Defend the Kurds pointed out: it's not "America's fault." It's "Trump's fault." Let us always remember what he wants everyone to forget: a solid majority of Americans rejected him.

That's why it's urgent that we discard the Electoral College in 2020.
And I have a bill to do just that. 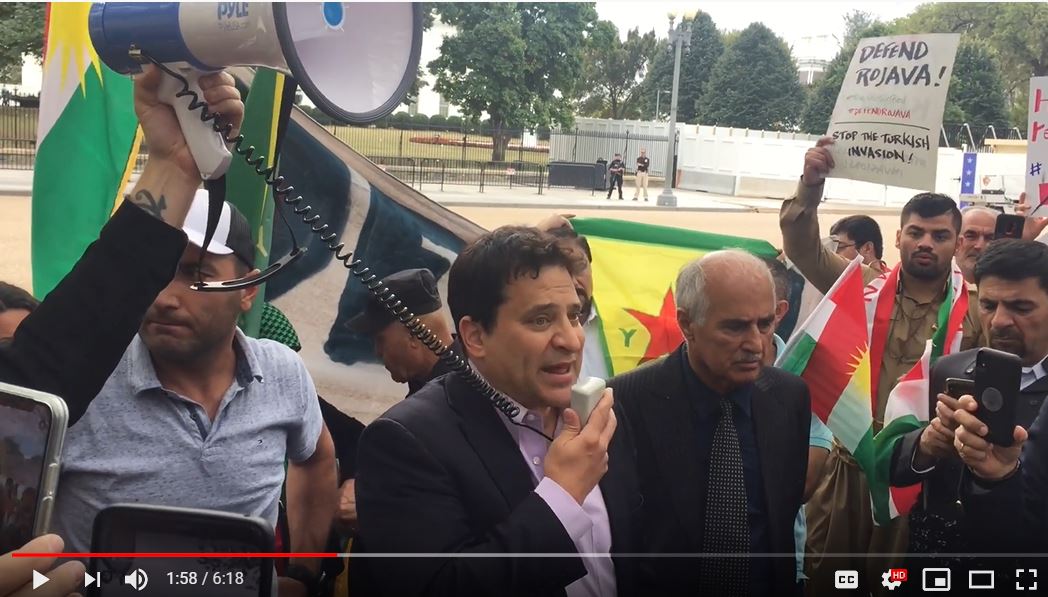 Click here to watch my speech at Sunday's rally in support of the Kurdish People. 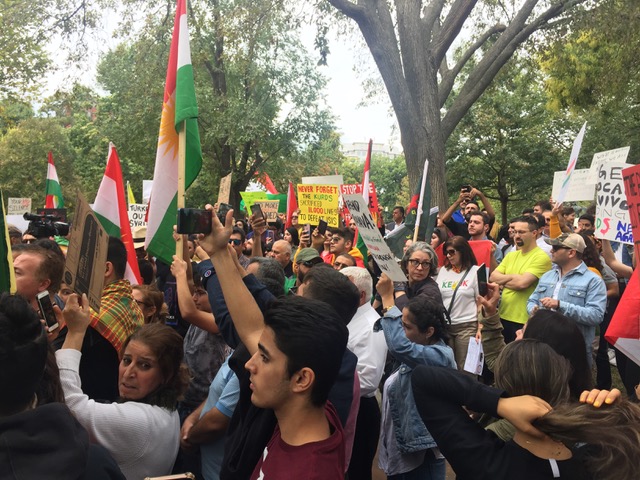 The large crowd was solemn and determined... 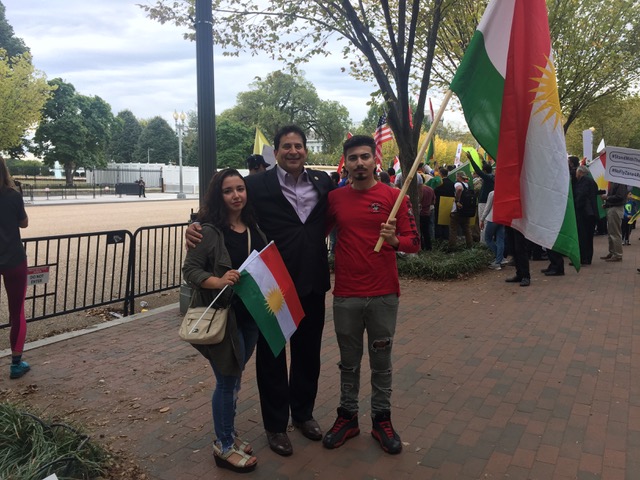 I was particularly impressed by the determination of the young people.

They love America and are horrified that the President
gave the green light to mass murder their families.

One woman told me how ISIS had beheaded her sister and her sister's five children. 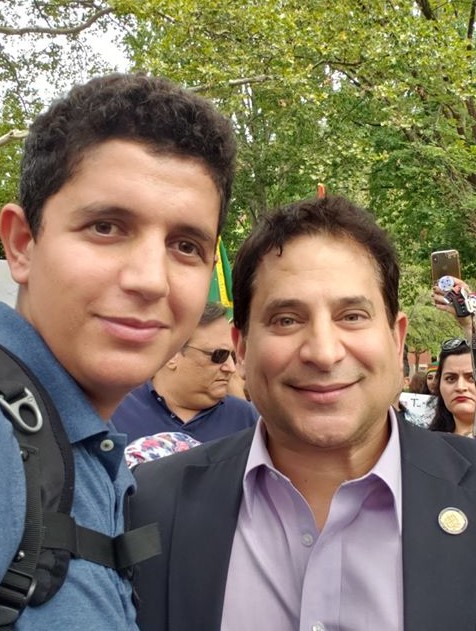 Young Kurdish-American Muhammed Mitraest (pictured above) thanked me repeatedly for being the only elected official to attend the Rally to Defend the Kurds at the White House.

We need your help!

Please contribute whatever you can afford
to TURN VIRGINIA BLUE

Democrats have the votes we need to prevail in Virginia if voters just go to the polls in this off-off-year election.
What we don’t have enough of is the resources to get the vote out. We’ve raised a lot but are still just a few hundred thousand dollars short from funding all the TV ads and mailers we need to fund every one of our competitive candidates whose races are within the margin of error.
Please help. Since I'm running uncontested, proceeds will be forwarded to the most competitive campaigns for Democrats to Flip Virginia in 2019.

We can flip Virginia.
Just in time for impeachment. 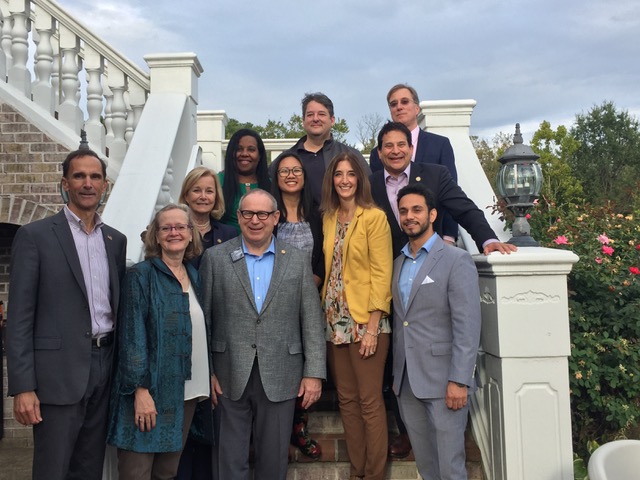 With your help in November, we will enact your values into law. 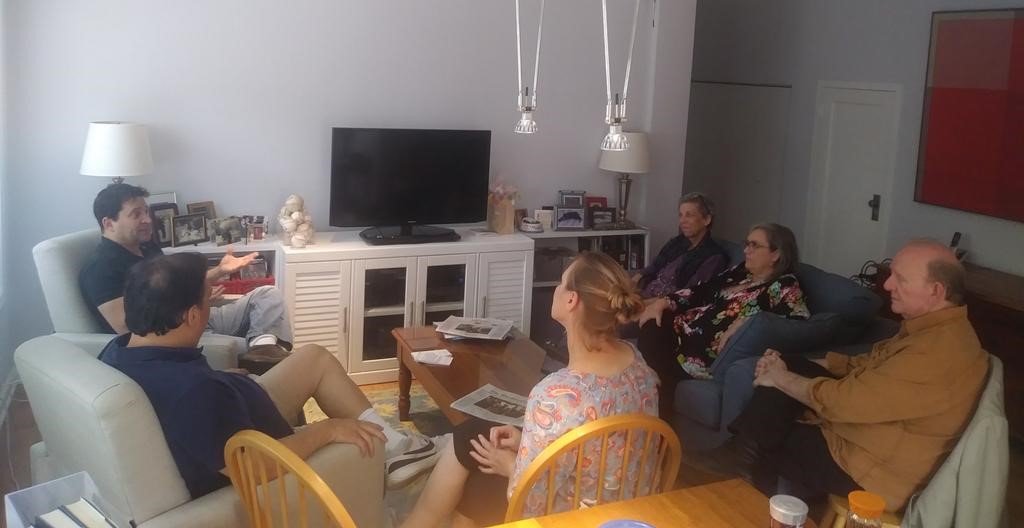 Thanks to Paul and Lori Friedman for hosting a meet and greet at their home in Parkfairfax. 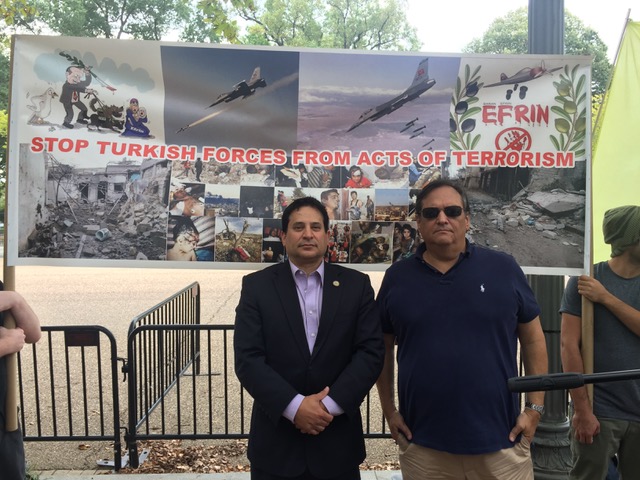 After the meet and greet, Paul and I went to the rally to support the Kurdish People. 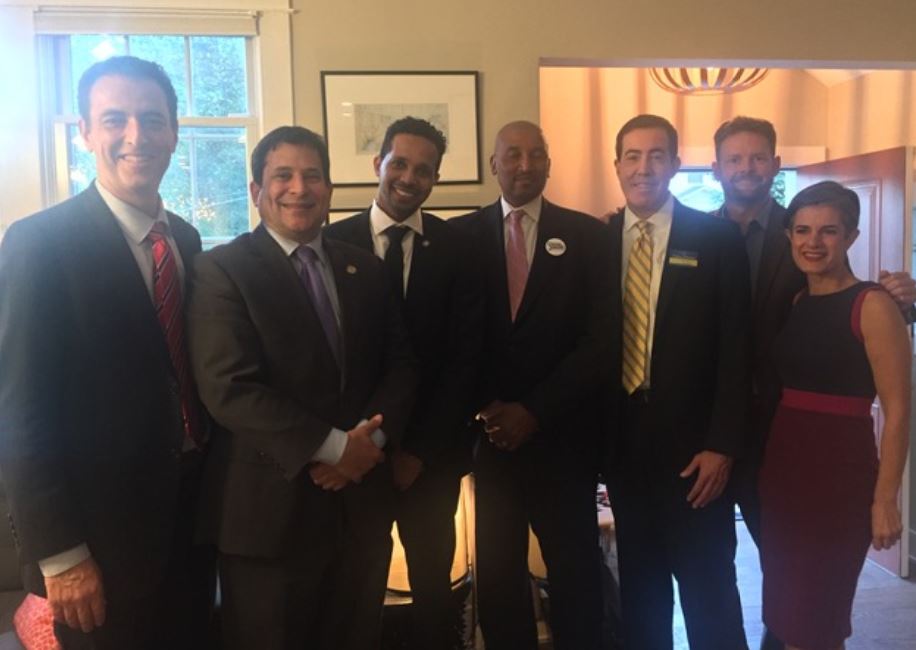 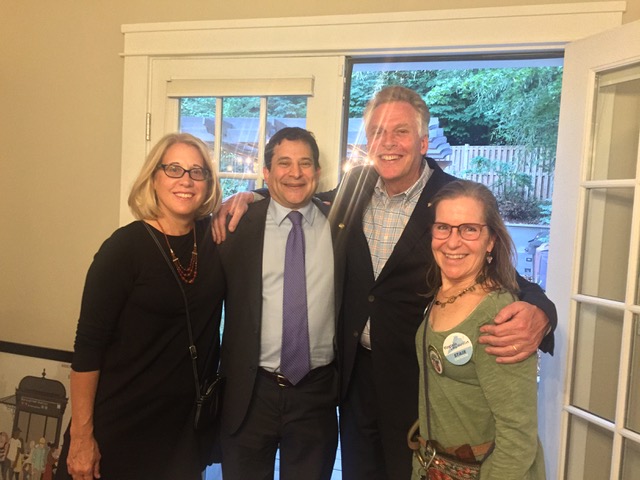 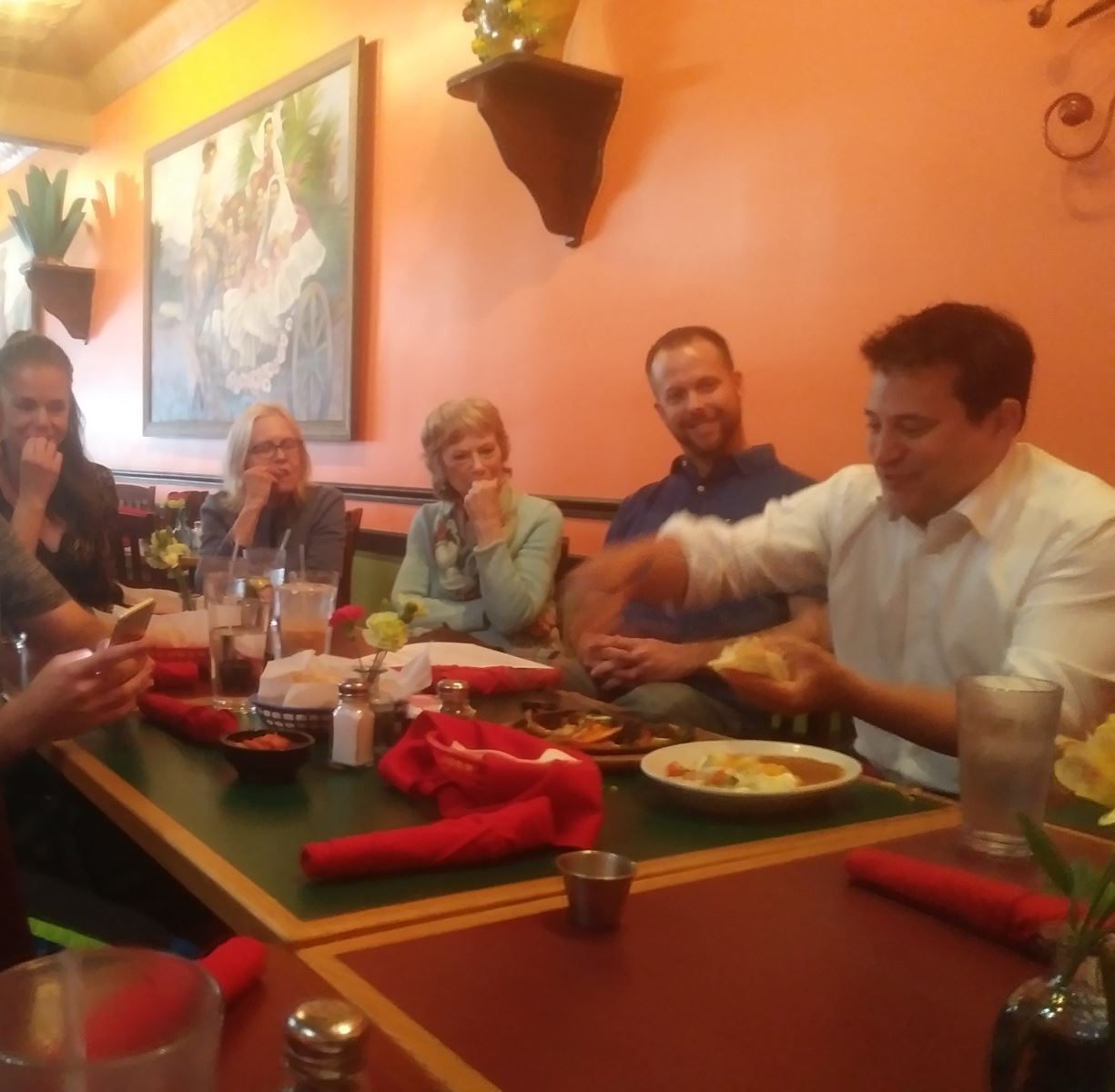 We had a lively discussion (and good fajitas) at my Monthly Meetup on Sunday. 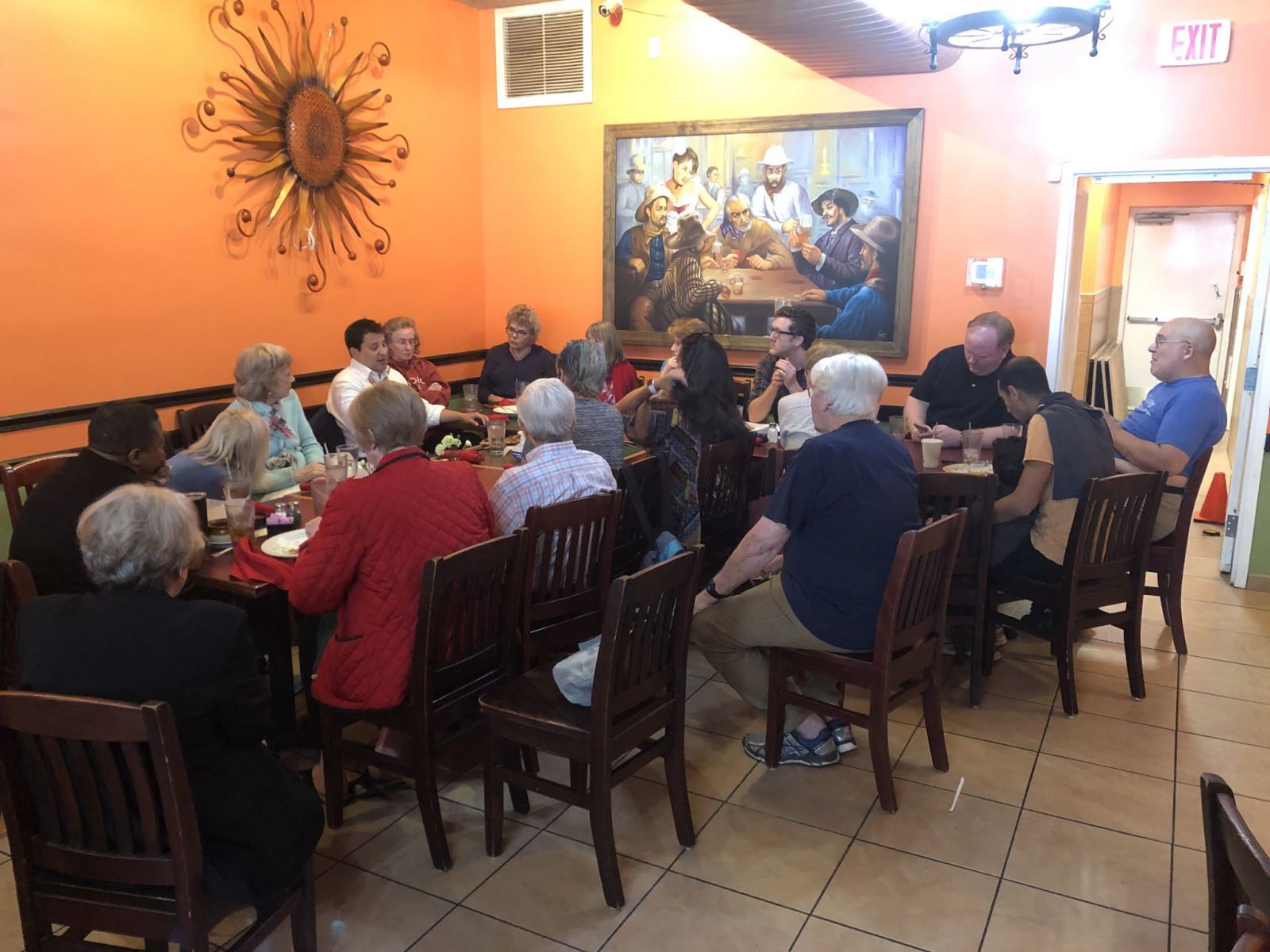 In case you thought all I do at my monthly meetups is eat... 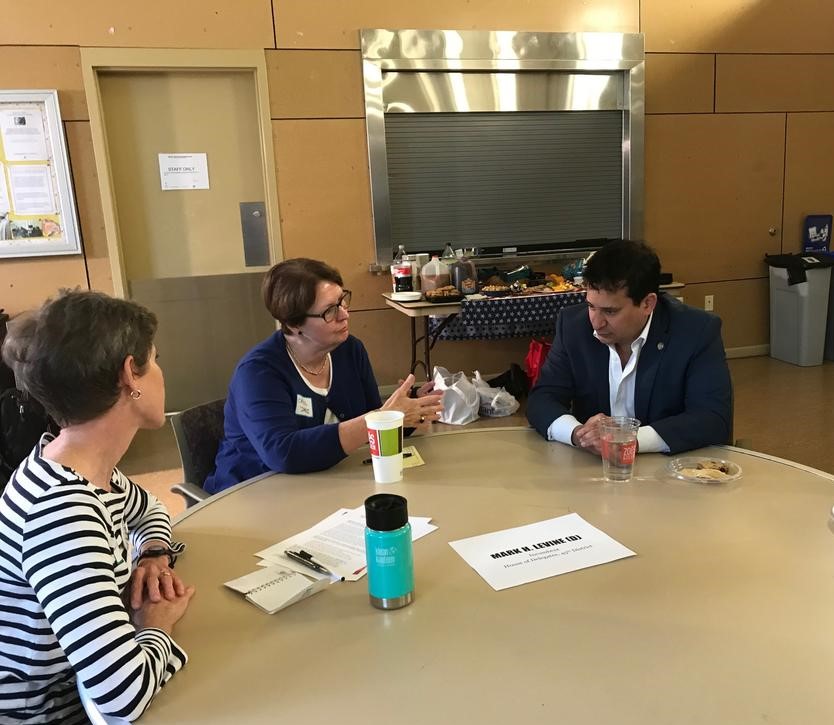 Speaking with constituents about what's at stake this November at the
League of Women Voters of Arlington's "speed dating" candidate forum. 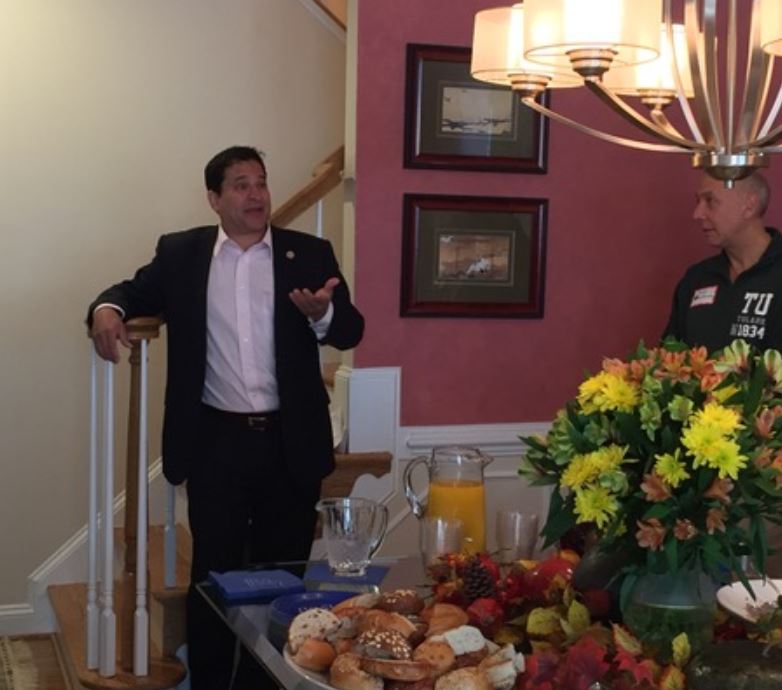 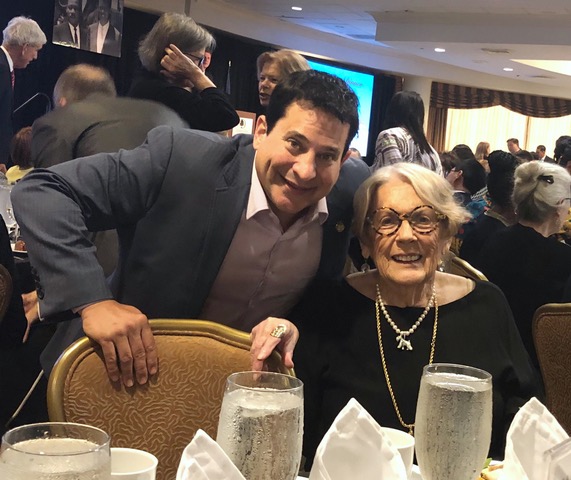 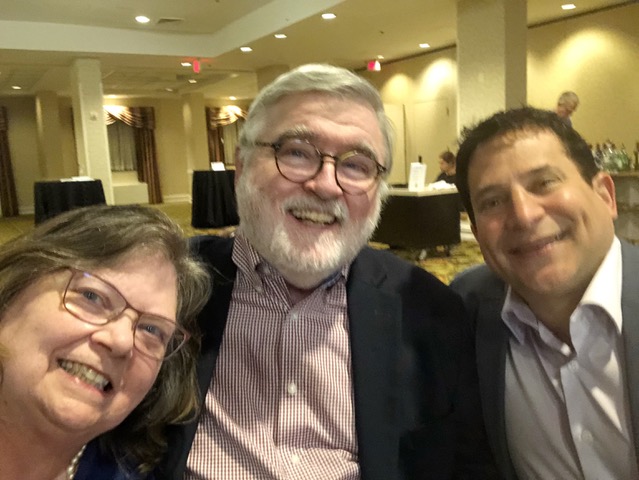 Janet and Jack Powers are voting blue this November. 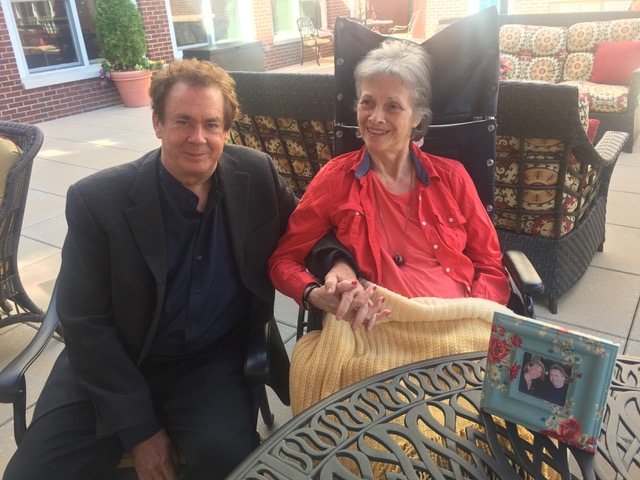 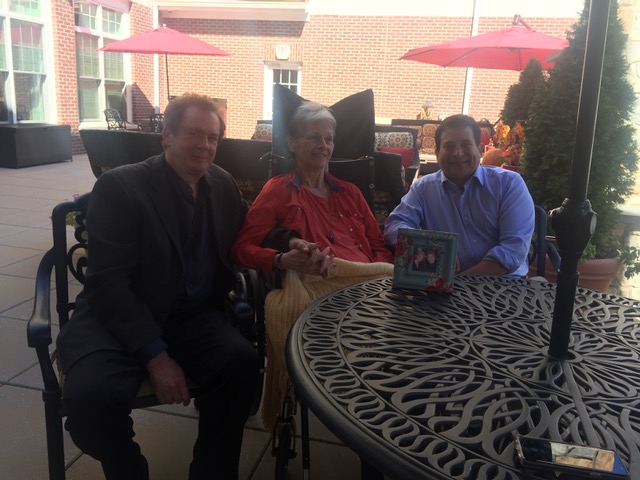 One of my proudest accomplishments as Delegate has been helping to reconnect my constituent Mike Jacobs and his life partner, Jane Lopez, after years of their being prohibited from seeing one another due to Jane's Alzheimer's disease and a badly written guardianship statute
(see, "Making a Difference..." ).
I will continue to fight for legislation to protect other Virginians from elder abuse,
so they don't have to go through the unnecessary trauma these two did.

If I attend an event with you and you have a good picture, please send it to Mark@MarkforDelegate.com so it can be featured in a future newsletter.